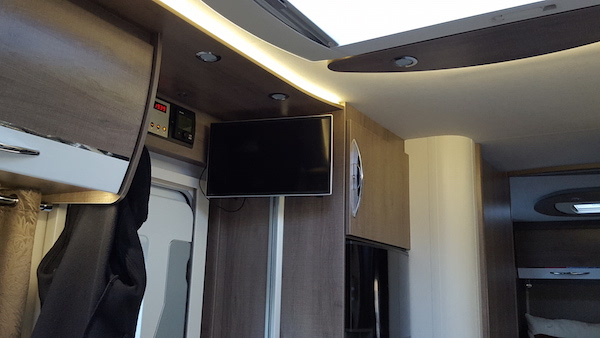 To TV or not to TV

In February 2016  we spent 6 weeks in a motorhome touring New Zealand and thinking outside the box I downloaded 50 films onto an external hard disk so that we would be entertained in the evenings ( having not a clue if NZ TV was any good or not) … As it turned out, we watched only two.  By the time we had made camp at around four in the afternoon, analysed all the photos and videos of the day, made dinner and washed up it was time to chat the evening away with whomever you were camped next to. The evening was over, time for bed. So now we have bought our own motorhome the big question is… do we buy a TV or not? … And do we spend between £1000 and £3000 on an automatic satellite seeking dish that can pick up good ol BBC wherever we are in Europe……

…That was written before we left and I didn’t manage to post it… We are now six weeks ‘in’ of an indefinite time away and I can report as follows. We did buy a TV, an 18 inch AVTEX 12v jobbie with built in DVD but we didn’t put an aerial or a sat dish on the roof, instead opting for boxsets of TV series that we didn’t have chance to watch whilst we were running around like headless chickens trying to earn a living. Five 128GB Usb sticks later and I have a fully loaded entertainment system for the evenings… ‘sans’ adverts. And boy have we needed it. The weather in Spain in March and April is not what I expected. The afternoons have been warm enough but a cold cold wind has prevented any outside evening activity. Enter the boxset – ‘Silent Witness’, ‘Monarch of the glen’, ‘Ballykissangel’ to name but a few; ‘Vincent’ with Ray Winstone, Suranne Jones and Joe Absolomon  was particularly well written.

With all the internet content available we haven’t been short of information so for us we have the perfect balance but if you can’t live without your daily fix of Jezza Kyle you’ll need to go the whole hogg and invest some dosh.