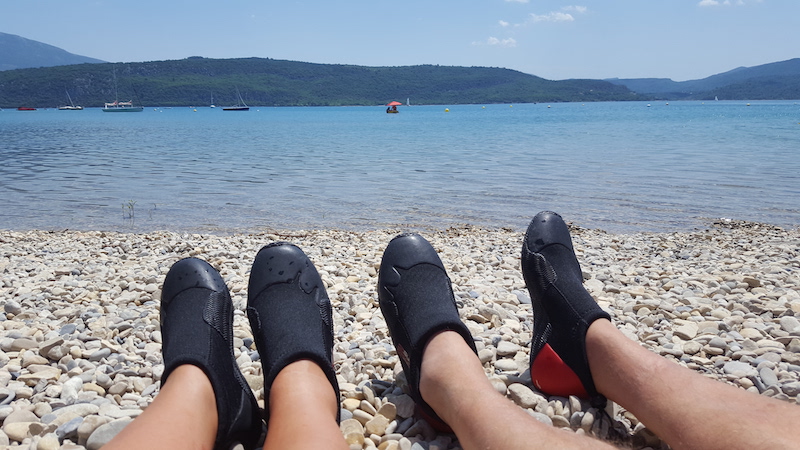 Rubber boots- Cor blimey, how good are these babies.

The Gul Power shoe- What can I say? We’ve used ours tons. They slip on- slip off and stop you getting stung by a man eating deadly stone fish whilst you’re paddling around in piranha infested rivers, streams and oceans… More importantly though, they do stop your delicate little feetsies getting hurt on those nasty sharp little stones they call gravel. Get a pair, in fact they’re so good get two pairs…

They’re not just for surfers you know!!! 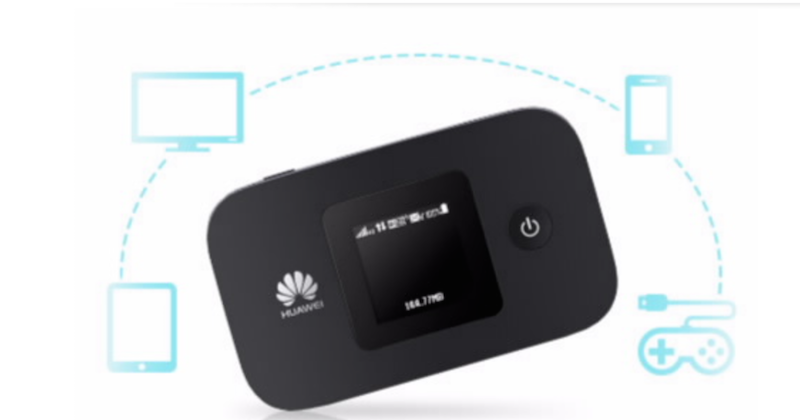 ‘Let’s go travelling’ she said. ‘Ok, I replied, Lets. And then I thought, holy schmokes, we consume over 30 gigs of data per month …in a house!!!  ( and no we don’t download movies). How do we manage that in a motorhome travelling Europe? We can do without TV but Data… man we need loads. We bank, we trade, we communicate, we acquire knowledge, we research, we investigate….we need data…

Having done a bunch of homework ( on t’interweb), spoken to a few peeps at shows and chatted to a  friend who had installed an Oyster sat system ( cost 3k plus) and said it was’t worth the investment (expensive contract plus slow download speeds)  we opted for the following:

We had 4G aerial added to the roof instead of manually taking an aerial out of a drawer sticking it to the outside of the van and running cables through a window and plugging them into the cigarette lighter socket on the dash.. ( what a pfaf). So with the mobile hotspot nicely tucked away in a cupboard and wires all neat and tidy, that was the hardware bit sorted.

Now for the software. We researched what the service providers were offering and ‘Three’ came out miles ahead with their ‘feel at home’ package. Whilst not entirely suited to a full time abroad magical mystery tour it did offer a solution. Here are the details. As at February 2016 they offered;

So for £50 pounds a month we could get 32 gigs of data if we could fiddle their system. And their system included the following restrictions:

As we had no intention of returning to the UK every 60 days I gave a friend of mine 5 of the 7 prepaid sims and a mifi unit I had spare and asked him to activate 2 of the cards at a time and send them to me in the post ( at a campsite we were staying in).

So with 2 active prepaid cards and a contract sim we set off on our travels loaded with 44 gigs of data sim cards all ready to go. Santander, our first port of call gave us an opportunity to test out my clever plan. In went the first prepaid sim card and on went the MIFI hotspot. A minute later up came the spanish ‘Movistar’ network, on went the two arrows ( upload and download) and hey presto we had internet. And good internet to boot. Movistar is deffo the network to log onto…( In Spain). And the spanish mobile network is very impressive. Wherever you look there’s a mast giving you a signal in the remotest of areas.

As we moved into France we found that Bougytel seems to provide the best network for connectivity. Masts aren’t as plentiful as in Spain but we haven’t been unduly cut off form the outside world.

Just as I was preparing my ‘muttley’ snigger at my cleverosity, disaster struck. I gave my friend the wrong postcode for the campsite and two sim cards (£60.00 worth) went missing in the post….AND we couldn’t get online easily… campsite WIFI being as hit and miss as it is.

So, off to the Orange shop to buy a local prepaid sim card. Bougytel don’t do em, SFR were out of stock so we ended up with a ‘blank’ sim card (€14.00) from Orange that you had to go to the ‘Tabac’ shop network to get charged up. ‘Which Tabac’s? I enquired suspiciously in the Orange shop. ‘All, of them’ the sales assistant replied confidently..

The first two shops didn’t have a clue what I was talking about but I hit success with the third. 25 euros gets you 3 GB of data for a month which is something at least. It kept us in emails if nothing else. But then…. Bingo! The simcards arrived at the campsite were were staying in a month earlier and as I had left a prepaid envelope with them they kindly forwarded our sim cards on. We were data munching once again.

So, if you need loads of data, get yourself a ‘Huey’ and some ‘Three’ prepaid sim cards… Check out the link.

Packing Cubes- Man, Get some!

When my lovely wife suggested getting packing cubes for the cupboards I thought- yeah, whatevs.. fill ya boots. In my defence I was busy doing ‘man cave stuff’ like what are we going to watch on TV and what tools to put into ‘the’ toolkit to really care I don’t mind telling ya but 4 months in they have been invaluable. You can store all your pants in one cube, socks in another- all your t-shirts go in a big one and you just take out of the cupboard the cube you need, withdraw the necessary item, zip it back up again and shove the cube back in the cupboard. No re-arranging, re-organising. the cupboard remains uncluttered and not jumbled up. They’re bloody marvellous. 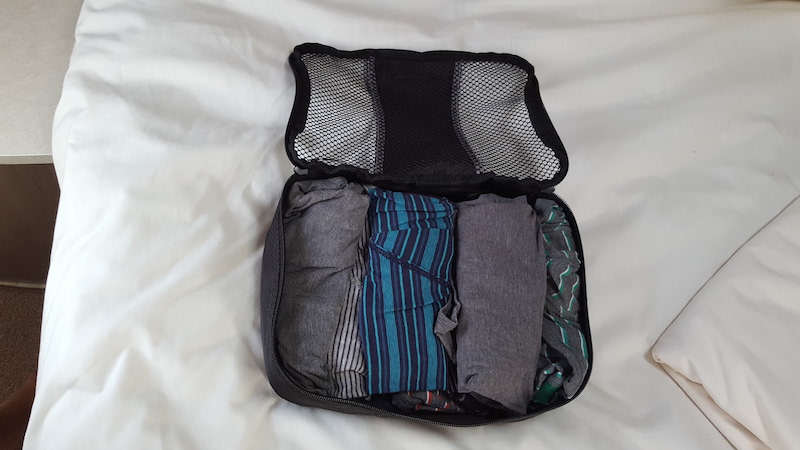 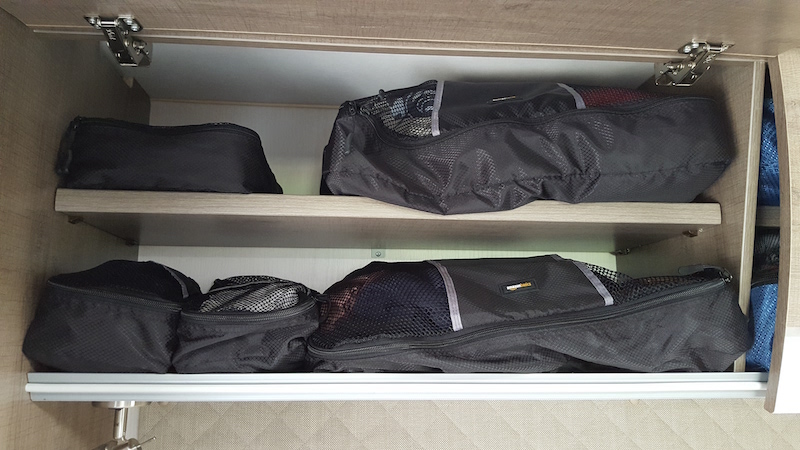 So, you’ve bought a Motorhome. Great, congratulations, you’re on your way, the world is your lobster. All you have to do now is to kit it out with extras and the one I want to talk about here is ‘THE INVERTER’.  Do you install one or don’t you install one? If you’re desired travelling option is to use campsites and only campsites (and there’s nothing wrong with that), probably not but if like us you fancy a bit of ‘Let’s go off the beaten track and see what we can find’ type travelling then you’re going to need power. The next question, therefore, is can you live off just 12V from the Leisure battery (or batteries) or do you need to convert your 12V into 240V.

`Well, that depends on what equipment you take with you and whether there is a 12V option. Two items that were an absolute must (take along) for us were the Nutri-bullet and the Philips compact juicer. So irrespective of what else we would use it for we decided to have one installed. Here are some pictures of our installation. 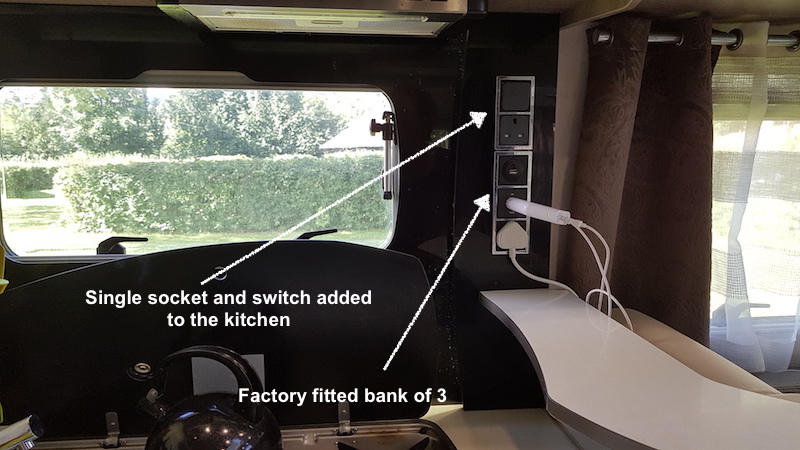 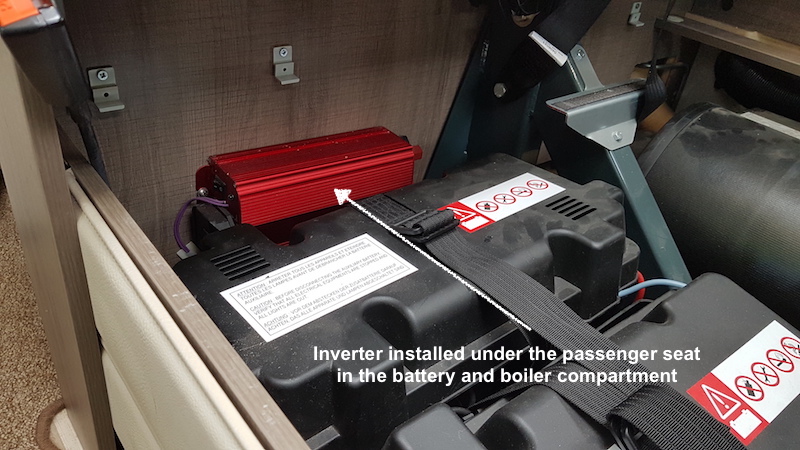 Whilst we were given an option to have the inverter wired to all the sockets in the motorhome we decided to adopt the K.I.S.S ( keep it simple stupid) method and just have a single socket and a switch installed in the kitchen and a double socket in a cupboard to charge all our devices. The inverter itself is under a seat, out of the way and you can hardly hear it humming when it’s on.

We purchased the Bestek 1000w pure sine wave inverter from amazon and had it fitted and hard wired to the batteries by the dealer. I have to say that it has been brilliant and we have used it for 3-4 hours continuously charging laptops and for just a few minutes whilst juicing in the kitchen and it hasn’t missed a beat in two and a half years.

In terms of the technicalities should you decide to have one installed follow these basic rules and you won’t go far wrong.

Since leaving the UK in 2016 we have added two electric bikes, a drone copter and a Gopro action camera to our list of devices that need charging and together with in-car charging devices, the inverter keeps us ticking along nicely.

All in all, I would whole-heartedly recommend adding an inverter to your motorhome but we are heavy users of electronics so for us it was a no brainer. You, on the other hand,  might find that everything you want to use comes in 12v format and you don’t need one. It’s horses for courses but if you do decide to have one take a look at the Bestek. At £69.99 it’s a billy bargain. Ours has been great. Check out the links below for more info.