So Greece has offered us plenty of eye-leaking beauty from the minute we left the ferry from Igoumenitsa on 11 April 2017 and in a very short time, a love affair blossomed with this incredible land. Around every corner some new delight greeted our curious eyes. And then there was Crete, which is a serious contender for one of our best memories of the last 15 months. So you would be forgiven for thinking that surely things couldn’t jump up the scale of impressiveness – although you’d be wrong. 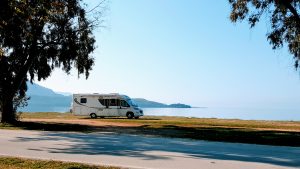 Northern Greece is so far removed from the Holiday Brochure images of iconic azure seas, golden beach coves and white washed houses strewn with bougainvillea. Yet its understated existence on the Greek agenda gives it even more reason to visit. 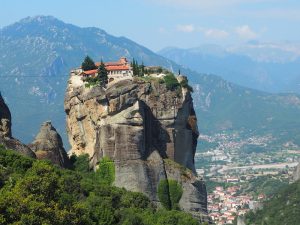 First there is Meteora, where the ancient Monasteries float in the air with the presence of spirituality. Then as you head deeper into the mountains you enter a land only trodden by traditional goat herders and bears trying to pillage the local’s bee hives. 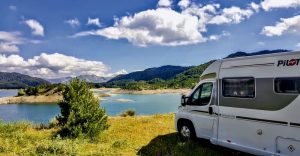 The Aoos Spring reservoir is one of the most peaceful places we’ve ever stayed and to watch the mountains change their colour with the movement of the sun, is a beauty to behold. Alas no bears and no wolves, although a few suspicious bone remnants and carcasses suggest their presence at one time or another. Such is the privilege of calling this place home. (39.834456 21.065472)

With more time, there is no doubting that we would love to have ventured further into the Pindos heartland, with, if I’m honest the tiniest desire to search out the elusive bear. Alas Bulgaria was calling. So in our journey east, we decided to miss the Halkidiki peninsulas and stay in the mountains, as this always feelings like a nurturing home for us. The drive from Metsovo to Kastoria is not breathtaking compared to others, although it is quick on the new motorway (€6 toll) and within 90 minutes you drive into the most welcoming of sights. Picking up a young backpacking couple made the last 45 minutes so much more interesting, as Portuguese Rico and his French partner Rosanne shared their hitchhiking stories. Travel is so much richer when you share experiences together. 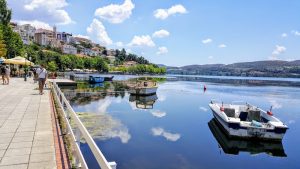 A mirrored lake greeted us, which took my breath away. It was definitely a sight to rival New Zealand’s lakes. Fringed by the most charming town, Kastoria reflecting back its splendorous image to the skies above. This attractive town is known across south-eastern Europe for its fur trade, which is centuries old and has brought a certain wealth to the area. This is evidenced by the magnificent 17-19th century mansions that proudly stand along the water’s edge, holding secrets of the furriers from a golden era of prosperity. The ‘kastori’, Greek for beaver, which gives its name to the town, were hunted to extinction by the 1900s and now only a few beaver farms exist, with a majority of trade now being sourced with scraps from Canada and Scandinavia. Interestingly, there seem to be more Fur and Leather shops in Kastoria than tavernas and that’s saying something for Greece. 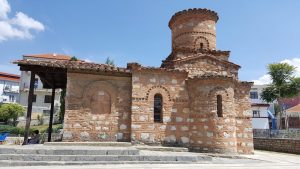 Sadly the key historical fact that is often pushed aside by conversations of fur, is Kastoria’s Byzantine history. There are around 50 chapels that are in various states of repair and yet they still stake their claim amongst the community, often times nestled in between homes. The frescos and architecture are completely different to anything we’ve seen around the rest of Greece. 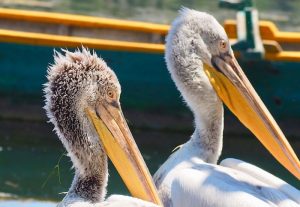 Beyond the fur and history, Kastoria is also famed for her lake, that supports not only a flock of some 100 pelicans, 200 swans and many more cormorants and geese. This place is teeming with wildlife, so if like me you love your photography or bird watching, then this place has your name written all over it.

Grebes teach their young to feed on the lake snakes, green frogs croak their songs in a perverse melody and reed warblers compete with each other for musical supremacy. Then after dark the fireflies dance around you, lighting up the bushes like a Christmas tree adding a magical energy to the darkness’ realm. The dawn chorus here is like nothing I’ve heard before; it is choral heaven and a beautiful alarm clock. If you’re very lucky you may even catch the Oxford and Cambridge Blues taking a practice run out on the lake with their oars in tow or is that row! This is big rowing country and they were preparing for a competition of some sort the weekend we left.

Kastoria’s jewel is her peninsular that invades the lake’s tranquility, protruding out to the watery wildness.  It offers mythology, ancient history and awe-inspiring underground geology. There is a one-way track around the peninsular, which is a perfect 10km round trip on foot or bicycle, giving you a different vista of the neighbouring mountains. At its neck, Kastoria has crept stealthily up over the rise and her influence on both north and south faces of the lake is clearly evident. Either side, lines of traditional fishing tenders line up against the shore, accompanied by a small flock of eagerly awaiting pelicans looking for a cheap meal. 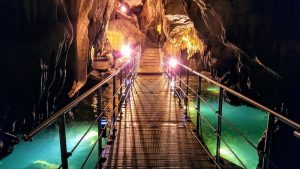 Don’t miss Dragon’s Cave, which is the third longest in Greece, the longest of which is in Seres, just east towards the Bulgarian border. Albeit it a small peninsular, as you enter the underground world, you will be amazed by what is hidden beneath its rock; a whole new world, only recently discovered. For €6pp you get a 20 minute tour through this underground wonderland, with calcium formations I’ve never seen before and emerald green pools that are fed by the lake outside of its darkened doors. A worthwhile trip to add to your visit. 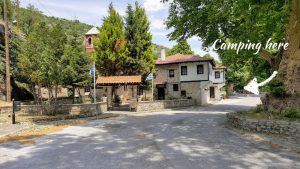 And just around the corner about 5 minutes drive, you will arrive at your home for the night. The monastery with its incredible Byzantine frescos still very much in tact, will offer you two or three permitted camper spots, as long as you remain 100m from the site. Underneath the shade of the trees you have beautiful views, a musical chorus day and night and an uninterrupted stay, where the locals are more intrigued by your presence, than bothered. There’s water and toilets too, so anchor up and explore this stunning town. (40.510208 21.29158)

As you regretfully leave the Kastoria’s shores, your route east will take you through fertile plains that keep the agricultural industry alive. Not in an obscene sense. Just land pocketed with squares of maize, barley and red poppies that rival France’s Provence, under the watchful eye of the rolling hills. And then you climb and wind up to the heavens, taking in the distant vista of Kastoria’s realm. The string of lakes in this area are well worth exploring and whilst some are prettier than others, they offer that synergistic perfection of water and mountains. 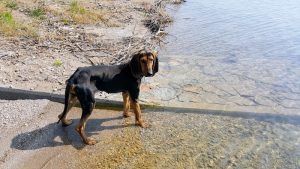 Lake Vegoritida and her town Agios Pandelimonas are, it’s sad to say, a poor relation after the joys of Kastoria, although sweet in her own right. You will be puzzled by the street lights submerged in the water and the permanent fisherman on a pontoon with no bridge to the mainland. What an interesting little place. Sadly our memories here will be somewhat coloured by a human’s cruelty towards their dog, who they trapped, in full summer heat behind a barrier with a football net. So in her vain attempts to escape she had tangled herself and was minutes from death. We managed to save her, although she was already emancipated and uncared for, so with water, food and some love we hope she found a way to survive beyond our little sojourn. It was all we could do as none of the locals cared. This has been the only blot on Greece’s copybook; they really have very little care for their animals and it is heartbreaking, although part of their culture.

That aside another lovely wild spot just outside the town, offered a lovely view from one of three terraced parking areas and although plagued by flies and mosquitoes, the spot is quite charming, yet lacking the charisma of our previous bedfellow.

And so our journey towards Thessaloniki and the Bulgarian border sets its course and new adventures await us, although what a devine surprise this mountain area of Greece’s Macedonia region, has been. We will return to uncover more of your treasure. Kx