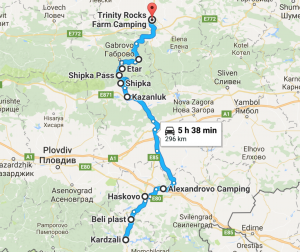 Trekking north from our southern Bulgarian initiation, left us a little sad, only because of the innocence and raw beauty of this undiscovered piece of heaven.  And as we said goodbye to the pine forests, we came into flatter land; well relatively speaking.  There were, in truth, some rolling hills and golden fields of corn, which offered us a lovely contrast to the mountains, and here sunflowers reigned supreme.  With heads bowed to the sun’s dominance, acres of bright yellow start to give way to a lime green hue as the season’s fruit bears its gift. 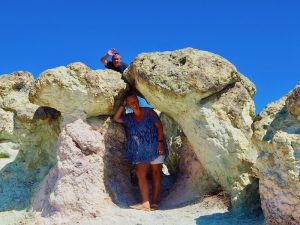 A little stop at the rock phenomenon, Stone Mushrooms, just outside Beli plast village, in between Kardzhali and Haskovo, is worth doing.  2.5m high stone formations unique to this area, shows Mother Nature at her best. 20 million year old volcanic rocks that have been weathered by sun, rain and wind hold great legend.  It is said that the petrified mushrooms are the daughters of a villager who lived in a fortress.  The fortress was attacked one day by the Turkish Ottoman army and the daughters took defensive action, killing the Ottoman leader.  The slain soldier’s friend took his revenge and caught the murdering daughters and, one by one with his magic staff, killed each one, turning them to stone. Geologically speaking, the rocks have a high volume of zeolite minerals, which are said to purify water.  A great little stop. 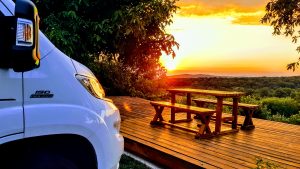 Our retreat, after what seemed like a big exploration of new territory that left us a little travel weary, was Camping Alexandrovo, just east of Haskovo. (41.987199 25.726452 www.alexandrovocamping.com).  A fabulous home-from-home spot that allowed us to rest up, run by the lovely Matt from England.  The wildlife here was wonderful, with Golden Oriels, Hoopoes, Woodpeckers, nesting doves and Wolves as our nighttime melody and the cattle being herded – our morning song, lit up by amazing sun rises.  Just such a wonderful stopover for four nights and a place we would definitely recommend and come back to.

This was though, where we sadly said ‘au revoir’ to our convoy buddies from Followourmotorhome as our paths took different routes as we headed directly north, into the central mountains. What treasure would this region hold for us?

To reach the mountains, a passage through Kazanlak was required, which from our southerly approach was seriously ugly and the first time I felt a little uncomfortable. We wanted to visit the World Heritage Site of the Thracian tombs, although finding somewhere safe to park was tricky. So we hopped, skipped and jumped out of there and headed for the mountains.

The Belly of Bulgaria 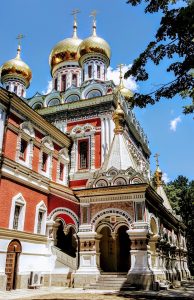 Our tyres continued to roll towards the Valley of the Thracian Kings, and Shipka, where ancient and modern history both leave their marks. 4th Century BC tombs are scattered in the plains of the Shipka valley, interlaced with lavender and sunflower fields, making a pretty landscape for history to really feel embedded.  Thracian Kings and archeological sites are found all over this region.  Although what caught our eye more so, was the distant sparkle of something hidden in the woods.  And so like magpies, we felt compelled to take a look.  What soon became clear was that gleaming mirage was in fact an enormous Russian style Monastery that belied the simplicity of the charming and humble Shipka village.  A short walk up hill is rewarded by a breathtaking piece of architecture that transports you to something out of the Kremlin rather than Bulgaria.  Although of course the intricate partnership between the Soviet Union and Bulgaria during the Communist rule, soon allows the penny to drop.  A short visit to this wondrous religious monument is definitely worthy of your time.  Check out the intricate detail of the exterior, its shiny domes and gaze in wonder at the surprisingly small yet highly decorated interior.  This is a serene place to while away half an hour or so.

Our little diversion did not deter us for long though, as our original destination was the Shipka Pass, where talk of a UFO piqued our curiosity.  This stunning road allows you to enter deep into the belly of Bulgarian culture, as carved into inch of earth are the battles of the Russo-Turk war of 19th Century, where Bulgarian volunteers played their role in defeating the Ottomans alongside their Russian comrades.  Monuments throughout this region offer reminders of this significant war.

The pinnacle of this route though is the almost eerie building that rises up from the mountain’s heart as if in some dominant defiance against the rebels. The Buzludzhanski Monument perched 1441m up on the mountain top looks more like a UFO than the Social Assembly Hall that was its original identity.  Looking like something out of Star Trek, this concrete spaceship is, these days falling apart and offers the now democratic Bulgaria a real diplomatic dilemma; repair it – showing solidarity to the past or leave it to decay and focus on surging forward progressively under EU protection.  There are rumours that there is to be some investment in restoring the building and turning it into a historical museum – so watch this space – if you pardon the pun! 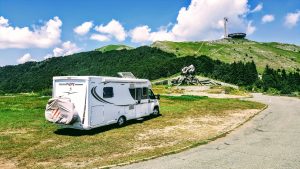 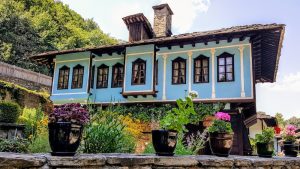 We seriously thought about stopping at this peaceful place, where even the birds seemed to be silenced by the eery eyes looking down the valley.  Still after a few days of respite earlier in the week, we carried on, along one of the worst roads we’ve encountered so far in Bulgaria.  It was a doable road, although had to be taken with caution and slowness of speed as the rough, pot-holed tarmac left a lot to be desired.  Picking up a couple of Hitchhikers, which is becoming a Motoroaming habit, allowed us to stay a little distracted from the stress of the terrain and after dropping them off we found a decent surface, under which we could get into third gear, finally!  A short 20 minute journey took us to Etâr, which is an open-air museum presenting historical arts and crafts indicative to the region.  The village has been created beautifully and invites you to step into a rustic way of life, with nearly 50 authentic workshops, many of which are powered by water mills.  It’s a great portrait of a Bulgarian by-gone era and really helps you appreciate the culture of this central mountain region.  And for 5 Leva per person, that’s about £2.00 each to you and me, it’s a steal.  Whilst so close, a little trip up to the Sololski Monastery, 6 miles up the hill is worthy of the diesel.  Although not as grand as Shipka’s offering, this understated 19th Century religious building, set with the backdrop of pine forest, is a sight to behold.  Especially the original chapel, which with its sky-blue exterior and ornate inside, is worth a peak, even if you’re not of a religious persuasion.

A synchronistic meeting half way down the hill with, not only another motorhome – a British couple to boot ended off the day beautifully as we shared an evening together.  John and Kath had been hot on our tails since Greece strangely and it was lovely to pass the time and share travelling stories together.

Our finale of this little section of the central mountains was Tryavna, home to wood-carvers extraordinaire.  The town, despite its mountainous position and perceived ‘middle of no where’ image, has built on its wood fame and is an elegant and buzzy administrative centre, which we were not expecting.  Outside of the touristy central square, the old town gives you the real feel of the carpentry skills that were and still are to some degree, renowned across Bulgaria.  The 19th Century artistry amidst a romantic blend of cobbled streets and bridges is a working town, where craftsmen still train.  If you look up above the tourist shops, the architecture of the buildings is incredible and every door has an ornate carving of some sort, revealing the talents of the modern day and historical experts.  An hour will suffice in this cute little place as Veliko Tarnovo will call you onwards.  And onwards we came – a new chapter we begin to write and share with you we will – soon enough.

Until then, we will leave you with images of mountain monuments, spaceships and authentic Bulgarian culture hidden deep within the heart of this central treasure trove of loveliness.  Kx