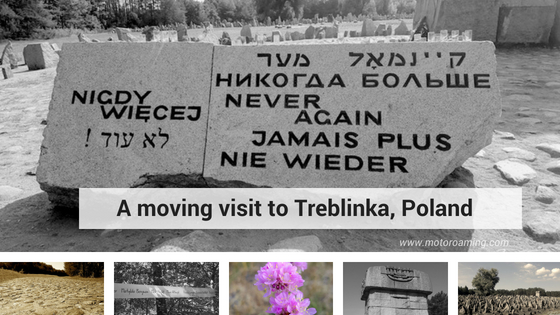 A moving visit to Treblinka, Poland

Treblinka, a seemingly lost world, hidden in the forest, out of sight although never out of mind for Poland’s World War 2 memorials. A place that invokes the stirring of emotion from deep within the belly of any visitor intent on learning more about the atrocities of this war’s holocaust and on paying their respects to the hundreds of thousands of people who died mercilessly here.

We have been inspired during our travels to continue our World War education since stumbling upon a cemetery in Slovenia that piqued our interested in understanding the real nuances of the two wars and fill in the shameful gaps from our schooling education. It was time we put this right and through our learning enable us to honour those who died at the hands of power, greed and dominance. Our most recent exploration was at Colditz in Germany.

Yet we knew that Poland would give us a completely different perspective of the war-time experiences and that it would feature heavily in our trip given that Auschwitz was an intended destination. Yet little did we realise just how much Poland would reveal to us as we committed to our educational journey from the depths of Owl Mountain in Silesia in the south to the horrors of Treblinka in the north east.

My research found Treblinka Extermination Camp some time ago, and after visiting Warsaw and understanding more about the Ghetto and Uprising, it felt an absolute must. A must because for almost 1 million people, this was to be their final destination, wrapped up in the vial guise of resettlement. 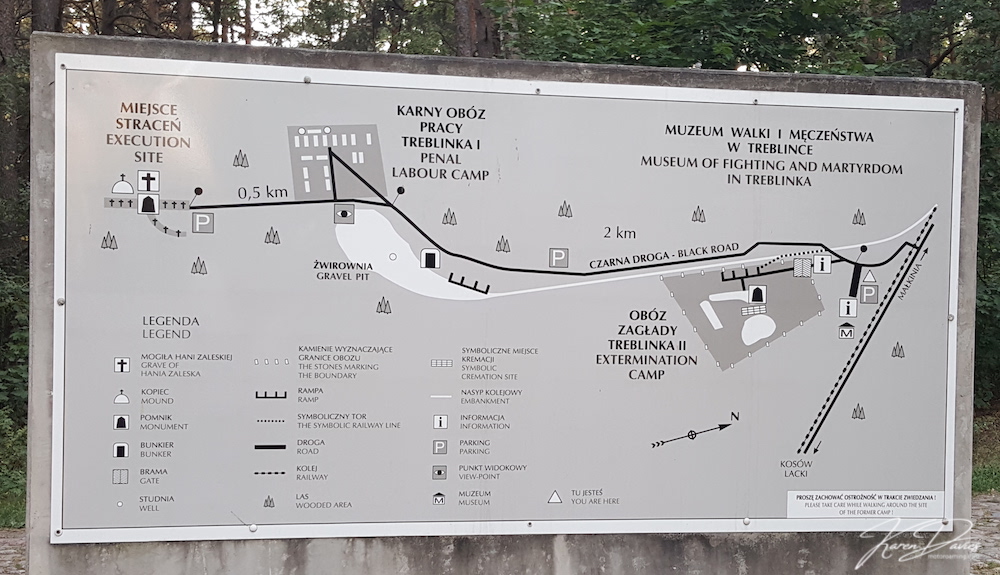 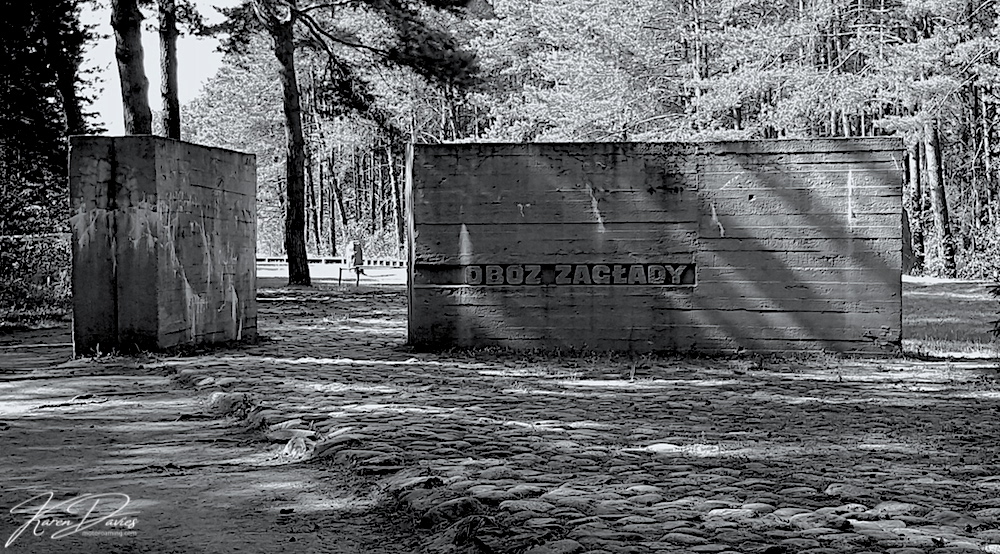 We set out early before any coaches arrived so we could treasure the peace that Treblinka demanded. The first thing that struck me was how abruptly the sound stopped. We had parked overnight in our camper in the museum car park and were entertained by the songs from the Golden Oriels.  Their wolf-whistle calls made me smile despite the sobriety of the occasion – it was a lovely alarm call. Yet as we walked through the mock gates of the Treblinka 1 Memorial Site, it was as though there was an invisible barbed wire fence that they could not or would not pass. And their sound ceased in the tiniest of moments that you could almost miss it. It was striking in its subtly.

The second thing that created an instant impact were the ribbons threaded through the pine forest as we approached the Memorial.  Each strand having half a dozen names of those who perished here. Weaving in and out of the thicket of trees, thousands of names hanging amongst the forest that was their deathly hallow, suddenly became people – real personalities who lived, breathed and died in this hidden camp. What an amazing testimony to their lives; forever immortalised, forever held in our loving thoughts.

Treblinka was destroyed and burnt to the ground at the end of the war, so in truth there isn’t much to see visually of the camp, for which I feel thankful in some ways. Although the reconstruction of the platform and railway line gave me an instant feeling of reality. The enormity of Treblinka’s horror started to dawn on me; the huge stones, each one dedicated to a country who lost the lives of their loved ones; Bulgaria, Greece, Ukraine, France, Czech Republic, Poland to name just a few.  Although nothing would prepare me for the next vision as I turned the corner. A huge memorial stone that covers over the gas chamber, stands with strength and defiance against a epoc that saw no respect for humanity and cultural diversity. The Father stone carved with the suffering plight of the Jews held my gaze, although it is the stone forest that surrounds it that really took away my breath. Each stone representing a town, city or community that lost their families to the will of the Nazis. Thousands of them, large and small, scattered across the acres in front of me. It left me incredulous at the horror inflicted by man against man! And when they created this memorial in the late 1950’s, they created an inscription that simply states ‘Never Again!’

Two simple words begging us to serve up a dish of compassion not hatred – yet lessons have not been learnt. Ethnic cleansing continues to still the beating hearts of those persecuted by regimes believing in their own supremacy. Sadly humility towards our neighbour is an all too distant relation that has yet to come into the family fold. When will we learn from these painful memories that scar our history?  Surely it is time for us to stop our ego’s demand for dominance and to start to live with love, hope and unity? 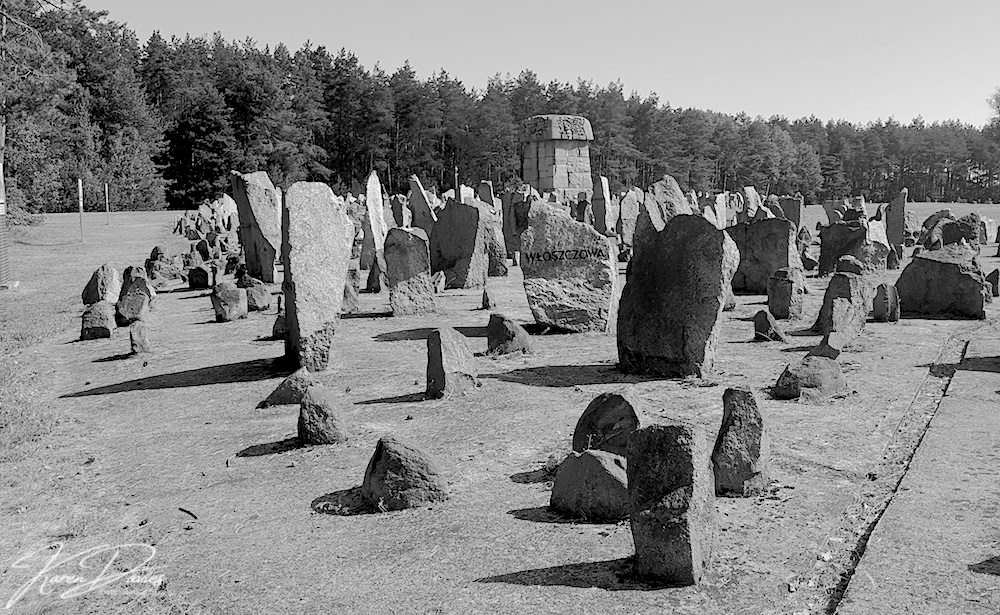 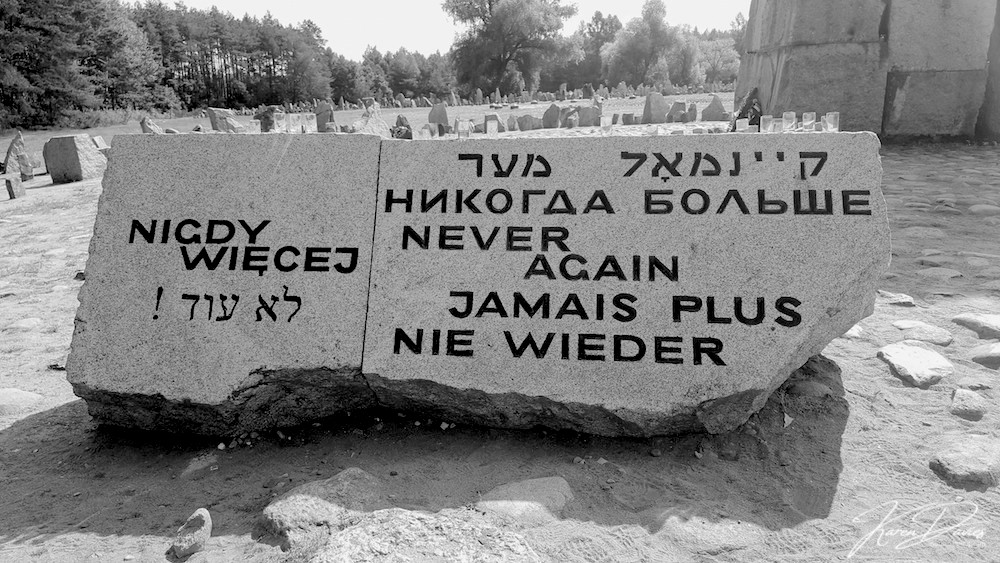 The path to Treblinka 2

I thought that Treblinka 1 was the core of the experience, although as we walked towards the Black Road which was built by the prisoners, we realised that it lead to something more. More horror, more death and more sorrow.

The cobbled path was hard to walk on, although I felt it was important to honour all those who knelt on bleeding knees, in the heat of the day, laying each stone to create the path. The path to their deaths. I didn’t want to take the easy route – I wanted my feet to feel the discomfort of the uneven surface. They gave their lives for this path and the least I could do was walk on it in their memory.

The deeper into the forest we went – 2.5km to be specific, something strange began to happen. I became acutely aware of the soil, which was strangely blackened, a greyness that was not natural. Nature did not make this path, this was something more. Did this blackness symbolise death or something more sinister? It really didn’t bare thinking about. At the same time though, I noticed an acrid taste at the back of my mouth, almost as if the fumes, the smoke was still lingering in the air. I know in reality that this couldn’t be true, could it? Could the embers still linger? Could the smoke be forever carved deep into the bark and woven amongst the pines? Is this a legacy that the ghosts will never allow to cleanse? I felt their pain in every step and every breath I took.

In an eerily still forest with little to bring it to life, the only colour came from the yellow butterflies that darted in front of us symbolising transformation and freedom. Beneath our feet nothing grew except the hardiest of grasses and heather. Nothing really flourished here. Even the old quarry that the Nazi’s used to hoodwink the community into thinking this camp was a commercial enterprise, looked lifeless and cold. And it feels right that it was this way.

As we approached Triblinka 2 – the Labour Camp, all that remains are the footings of buildings that stored the Quarry tools or the Zoo for the Guard’s amusement. Although constructed buildings were not needed to imagine the horror here. The cries and tears of those trapped in this place were carried on the breeze.  And yet, I noticed the thousands of pink scabious flowers that danced on the sparse covered carpet that now shields the evidence of Triblinka’s Labour Camp site, (which takes on more of a complexion of an archeological site than a historical horror film). It somehow belies the truth of what lies beneath the surface and the hatred and fear that hung in the air, yet each flower sprung from the earth in salute to each person’s death, a tribute to their heart-beats and a memory not to be forgotten. 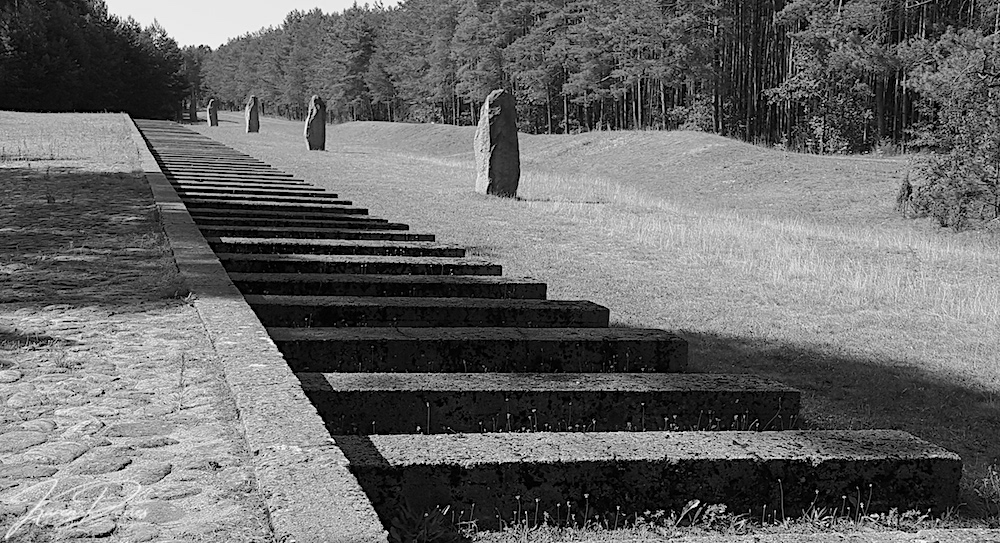 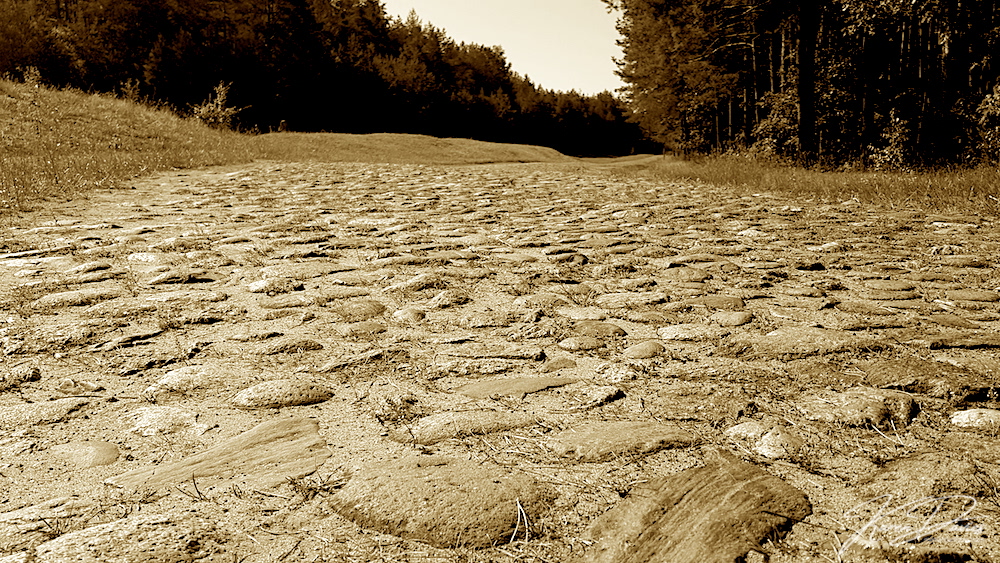 It may be over 70 years ago, although this extermination camp is as real as if it were yesterday. And that is less about the memorials that have been lovingly created and more about what still hangs in the air. A reminder of what has gone before and how it shapes who we are today. The forgiveness of a nation, the healing of a wound so deep and unity in the creation – at least this is what we pray for.

In memory of those who have perished, your souls float in the wind as it whistles through the Treblinka forest and we remember each and every one of you.

For more information about the horrors of this camp, reputed to have killed the largest number of people, second only to Auschwitz, click here. 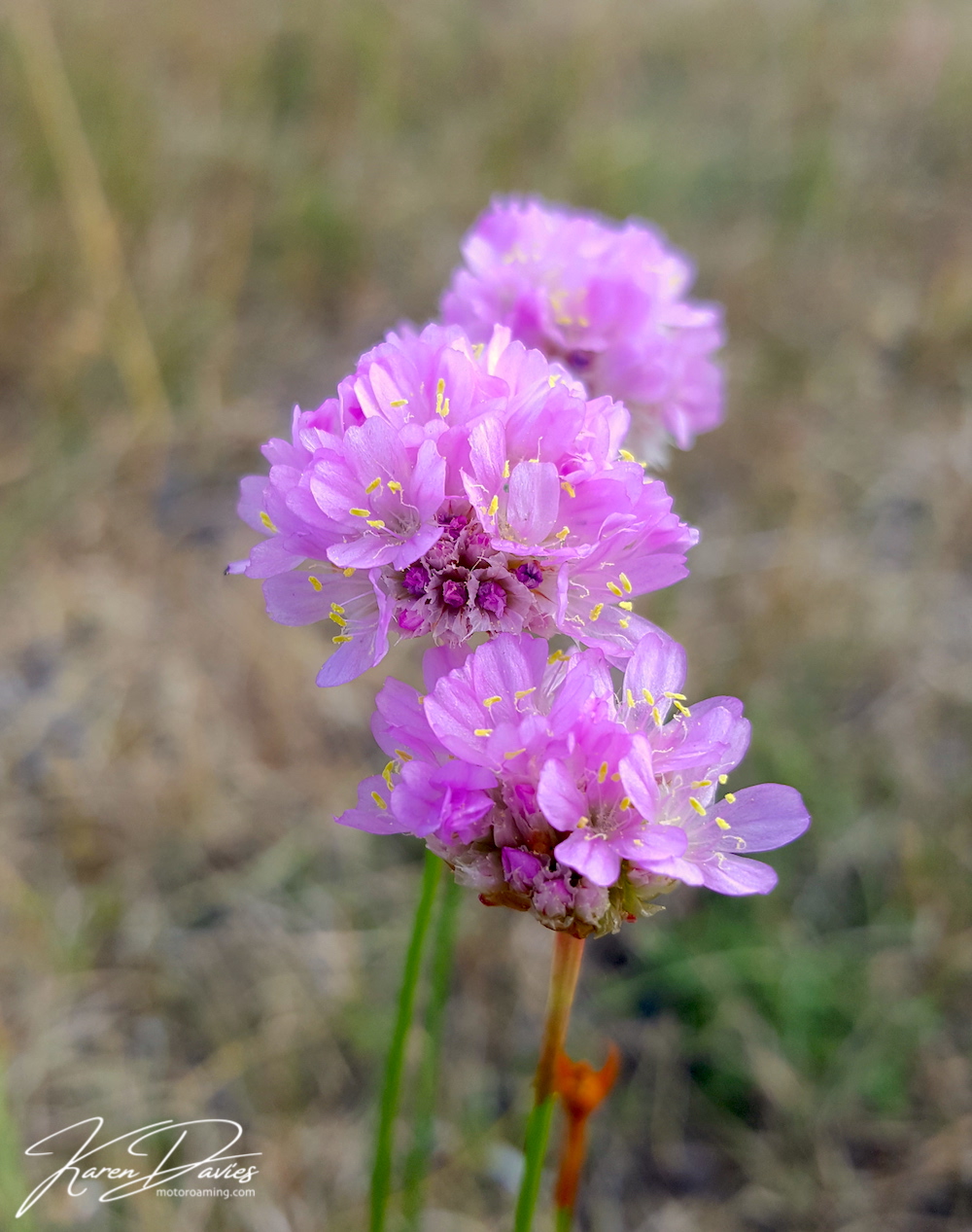 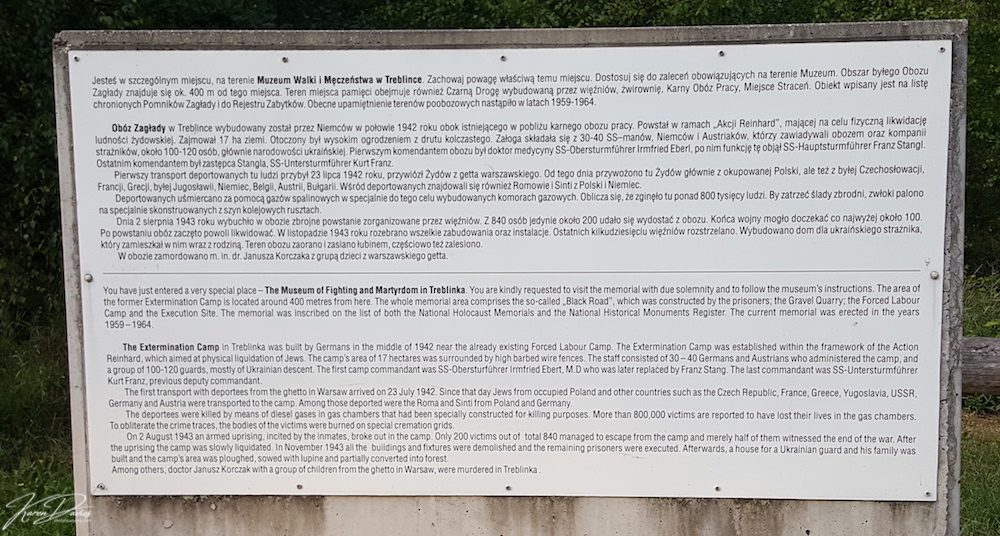