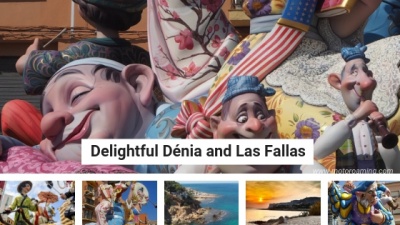 Spain cannot be rivalled for its annual diary of fiestas, each one demonstrating a certain passion for religion, ancient tradition or simply just enjoying a damn good party. One of the things we love most about travelling is being able to, not just spectate, to really throw ourselves into these celebrations and get a real sense of the country’s culture.  One such fiesta is held only in the Valencian Community on the eastern coast of Spain in mid March, and it is a spectacle not to be missed.

It was Las Fallas time!  (pronounced fiyas, not fallas as this has a whole different meaning, which you might want to google!)

Denia, in the south eastern corner of Spain is famous for many things; its orange groves, its tin and wooden toy history, raisins, its microclimate, and Montgó National Park.  And interestingly, it is the third healthiest place to live, according to the World Health Organisation.

This is our third visit to this lovely part of Spain and each time we come back, we fall just a little bit more in love with it and its quirkiness.  Albeit on the Costa Blanca coast, there are no high rise towers, no wall-to-wall hotels along crowded promenades, just a very lovely marina, a buzzy tree-lined high street, a Friday market full of tasty, fresh fruit and veg and gastronomic restaurants dotted all around the town.  Turn right from the port and you have a 4km promenade, that takes you along a craggy coastline, where you can climb up to the ‘PepperPot’ and the windmills overlooking Javea, or if you’re adventurous, take the mountain-goat track towards the beautiful Tallada caves.  So many lovely aspects to this town that, like a onion, keeps revealing more and more layers, the longer you stay.

What stands out in the town’s calendar though are the Las Fallas’ celebrations held during the week leading up to 19 March, which is the day Saint Joseph is honoured.  This was the purpose of our third visit as we are so curious about Spain’s fiestas and this one, we had been told not to miss out on.  So when we were warned about it being a serious party weekend, I don’t think we were quite prepared for how much revelling we would be doing. 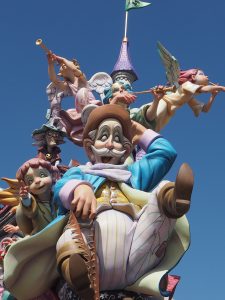 Las Fallas, as a celebration, dates back to 18th century when the locals from the Valencian Community held a simple festival to welcome the arrival of spring.  To co-incide with Saint Joseph, spouse of the Virgin Mary, local wood workers would build small statues that in some way depicted local events or characters in a satirical way.  During the day, children would collect burnable materials and build small rubbish heaps that they called fallas. These were then burnt on the eve of Saint Joseph’s day.

Today, the event bares no resemblance to its historical sibling.  These days huge statues, as tall as three buses are created, taking months to lovingly craft and which are assembled in the centre of each district’s heartland – and competition is rife between the fallas’ artists.  Although intended to unify a community, the modern-day celebration is more about neighbourhoods trying to out-do one another to produce the best effigies possible.  Each one is a complicated structure of steel, wood and polystyrene, which take a whole year to plan, organise and construct.  Each statue tells its own satirical story and is judged based on their detail, character’s facial expressions and the degree of skill shown by the artist in their composition and balancing acts.  It is reported that some of the larger effigies cost up to €20,000 to construct and they are truly magnificent.  Before being part of this fiesta, I had an image of a parade of statues on wheels that would move, in procession like format through the streets, much like a UK carnival.  Not so and when you see the size and complexity of these works of art, you’ll understand why they can’t move. 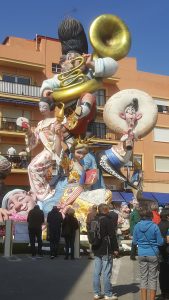 Once the effigies have been presented to the town on 15 March – which is called La Plantà, each district begin to visit their neighbouring counterparts and honour their fallas, with dancing and brass bands parading up and down the streets.  The partying is pretty intense as you get closer to Saint Joseph’s day, which is when ‘La Cremà’ – the burning takes place, bringing the celebrations to a close.  The week’s festivities have a strict schedule and although each town might do things slightly differently, the intent is all the same – party, party, party!  By Sunday the revellers look physically exhausted having not slept for three days.

Our experiences in Dénia were a sensory explosion; Our ears were battered from daytime firecracker displays and young children setting off fireworks right beside your feet, making your nerves jangle.  Our eyes feasted on the formal night-time fireworks that lit up the sky and the processions of stunning regional costumes that put Joseph’s Techni-coloured Dream-coat to shame.   Our hearts vibrated with the feet tapping brass bands that popped up from every street corner and the vibe that bounced off the buildings was palpable.  Each statue took its pride of place, demanding your respect, as their characters towered above you, reach for the clouds.  The colours, design and story behind each work of art was a sight to behold.  You could take 20 minutes looking around each statue and every angle offered you something unique and yet more intrinsic in detail.  It over-shadows Disneyland for its fairy-tale composition. What a tragedy that they burn them! 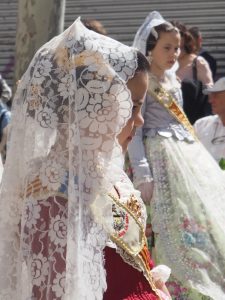 All day and most of the night there is something going on during Las Fallas and you can’t help getting taken along with the energy that dances around every street corner.  Although the pinnacle of the festival is La Cremà, where the fallas are burnt ceremonially on 19 March in honour of Saint Joseph.  Now this is no normal, health and safety organised event where you are miles from the central stage – for La Cremà you are up close and personal.  These are fires that burn in street Plazas adjacent to apartments, bars and restaurants.  We felt distraught to see these masterpieces be strung up with fireworks and then offered to the God of Art as flames consumed every inch of the constructions, reducing them to soggy ashes on the concrete beneath them.  Months to create and 10 minutes to destroy and yet, paradoxically we saw each district rejoice in the burning ceremony and the party continued.  Most bizarre. 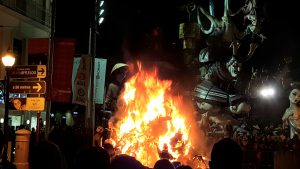 We felt a little underwhelmed by the burning and not really sure why. I can’t think what my expectation was, although somehow it didn’t quite match my image – perhaps I’ve been to too many Bonfire Night events.  Or may be the lack of organisation played a part trying to reach the burning at the right time.  Or perhaps being so close to toxic smoke-filled air was too much to bare.   I suspect that staying up to 1.30am to see La Cremà and a certain exhaustion from the weekend’s events played a part in our reaction.  Still seeing the flames flirt menacingly with apartment balconies was an intriguing experience, although the Firemen had it all under control. Our faces looked like something out of a Chimney Sweep’s convention by the end of the evening, as hoses constantly dousing the flames sent soggy ashes into the sky only to float down to the throng of observers below.

And so our Denia love affair continues after the buzz of their La Fallas celebrations.  Strangely as we took a quiet day post-party, it was amazing to see how clean the streets were, after only a few hours.  There was simply no evidence that any fiesta had taken place. The roads were as clean as a baby’s bum and no ashes were to be seen.  Just the subtle smell of burning polystyrene that lingered in the air, reminded you of the fiesta’s presence.

We were so glad to have experienced this unique event and it will remain in our memories and our lungs I suspect.  For a Guide on how to Survive Las Fallas, click here – and put it on your Spanish To-Do-List for next year.  Love from the Motoroamers. xx 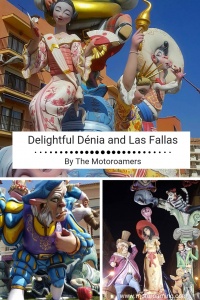 Check out our gallery