The day that Colditz suddenly appeared on my radar was a delight and a surprise given that I had no idea where it was in Germany let alone the intriguing history that it would surely reveal to us.

One of the things I have come to enjoy most about travel, is the heart-beat that appears in-between our planned destinations. Research is great and creates a real anticipation, although for me nothing beats the moment when I find somewhere on the map that instantly changes our direction and takes us into new and unexpected territory. As I start to explore my amazing find, I feel in a surge of excitement rising up from my feet with the realisation that I have stumbled upon something special, unexpected and a priceless experience that will enrich our adventures.

That was exactly what happened for us with our Colditz visit. Out of the blue, searching for a place to stay en route to Poland, I saw a castle icon. And with a mere click of the mouse it revealed its identity – Colditz. Somewhere in the deep recesses of my mind it rang a bell and then its war-time story started to connect as I started a little interaction with my mate Google. So our next destination was sealed and the next chapter of World War education could unfold. 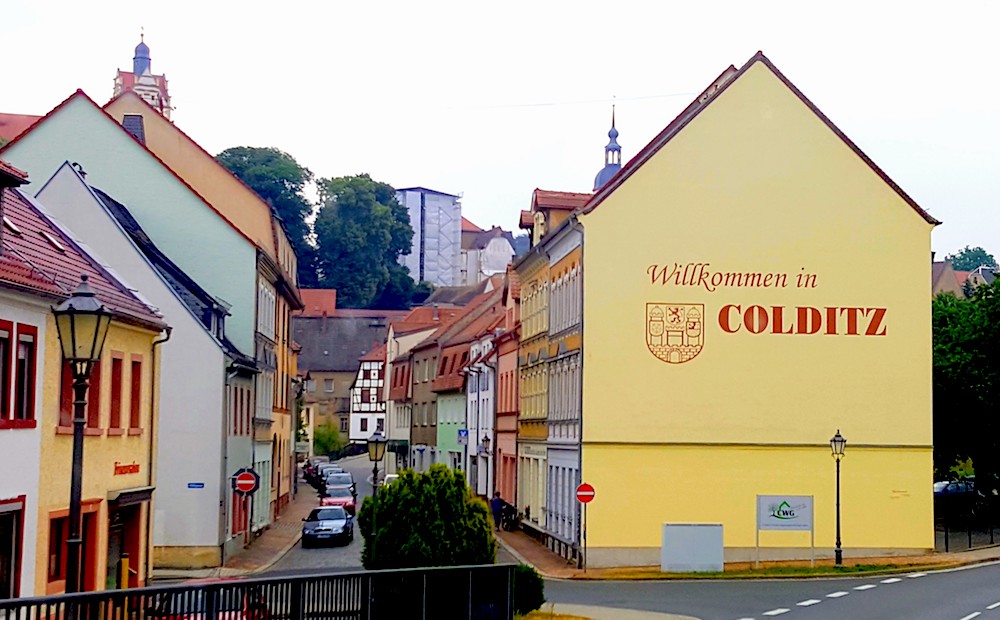 Colditz so much more than a prison

Commercially renowned for the manufacture of ceramics, Colditz has a surprising tale to tell with its porcelain and stoneware production that date back centuries.  The mining of clay in the early 1700 put this little town, south east of Leipzig, on the map and changed its financial fortune forever. So when ‘dining’ turn your plate upside-down and if you see a small ‘cp’ mark on it, then you are eating off a piece of Colditz porcelain treasure. 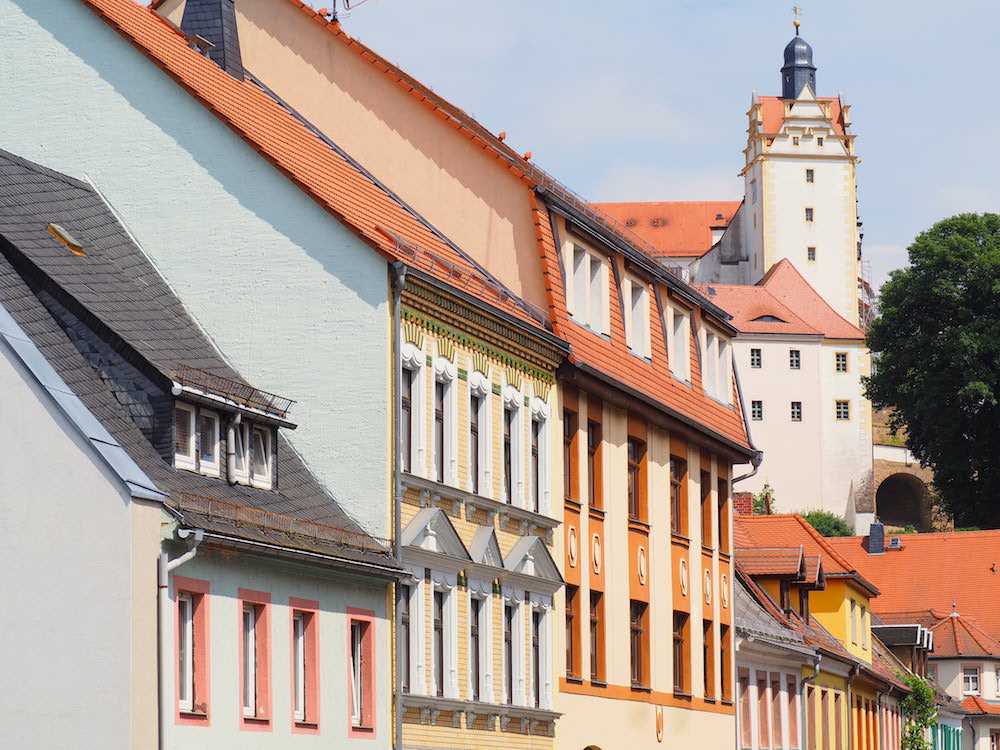 Ok, so back to the star of the show! The Colditz Castle is indeed the main draw here, it has to be said. This regal building has a rich history dating back almost 1000 years and has had more identities than Madonna; from a hunting lodge back in the Medieval days, to a psychiatric hospital, a State Poor House, a general hospital and, more recently a youth hostel. And that’s before two fires completely refigured it and it became the centre-piece for a War-based film. How can one building reinvent itself so many times and still remain intact and magnificent?

Built 30m up on a solid rock face, this impressive building packs an immediate punch as you approach the town from Grimma – which also looks like it’s worth a visit. With its recent cosmetic facelift, Colditz Castle maintains its integrity as an impenetrable and imposing watchtower across the Saxony land.  The once grey building now offers visitors a visual feast with its cream and yellow fortress walls and orange tiled roofs typical of this region.  You cannot fail to be instantly wowed by this initial view as you cross the river Zwickauer Mulde into the magnetic belly of the town’s historic centre.

Of course World War 2 tells many harrowing stories of Prisoner of War camps during its epoc and I set out with a mixture of anticipation and a desire to learn. Colditz is one of the many places during our war-torn history that symbolises bravery and a fight for freedom. Yet there was a twist to this story which we were about to experience as we entered the Whispering Gate of this High Security Prison. 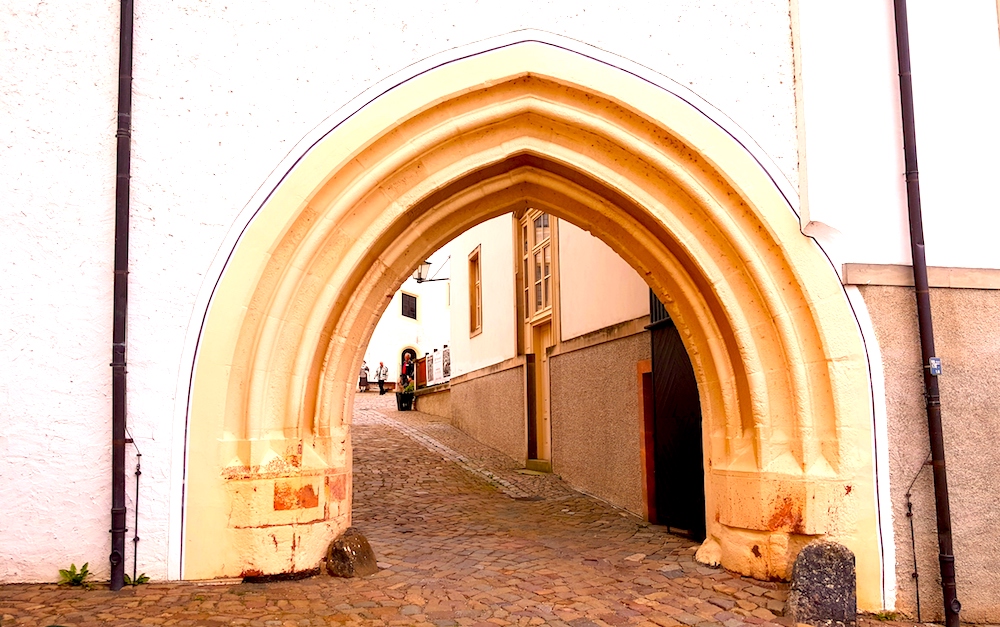 Armed with an extended tour with Steffi, we immediately got access to the inner sanctum of the Castle, where we could throw ourselves into the lives of the guards, prisoners and life behind these imposing walls. The first thing to notice was the ‘guest list’ of this place. Whilst between 500-600 prisoners were imprisoned in Colditz at any one time; these were not just any old prisoners. These were high ranking officers who had a reputation for being serial escapees. A collection of some of the greatest, most creative and imaginative minds of the war all in one place! Engineers, designers and ingenious inventors – surely a recipe for some of the best bid for freedom stories of the war! And it is this fact that serves as the backdrop for the Colditz story.

Our exploration starts with an immediate sense of respect; these prisoners had something special about them and as we continued our tour, craning our necks to the lofty roof lines, you got the feeling that this Prison Camp was pretty unique. Getting access into prisoners’ quarters set out with a bed, wardrobe and a desk with views, this was not what I was expecting. And as our tour unfolds we heard stories of the fair treatment of the ‘inmates’ and how well fed they were and how, thanks to the Third Geneva Convention, their well-being was high on the priority list for their captives. A theatre where shows were masterminded (indeed perhaps even an escape or two planned), visits to the local pub, regular exercise outside the grounds of the castle were some such activities allowed for these prisoners of war. Let’s not forget though, that outside of these walls we are still talking about the ravage of war, battles and horrifying death. Although strangely as we walked through the castle’s gates, horror is not the first sensation that struck me; no sombre feeling that reaches deep into my soul demanding my tears. That I’m sure will come when we visit Auschwitz in Poland.

No, Colditz has a different vibe and even the staff portray a deep respect for the events that occurred here over that six year period. A respect for the prisoners’ fair treatment and the masterminded exploits of the imprisoned. And it is this theme of admiration and respect that emerges time and time again from our tour guide. Unlike so many other camps, there were no murders or intended deaths here. Only one man died. The Guards’ policy was not to ‘shoot to kill’, only to injury and yet in September 1944, British Officer Michael Sinclair was unintentionally killed when, after attempting to escape, he was shot in the elbow that then ricocheted into his heart.  He was subsequently buried with full military honours and a seven-gun salute. 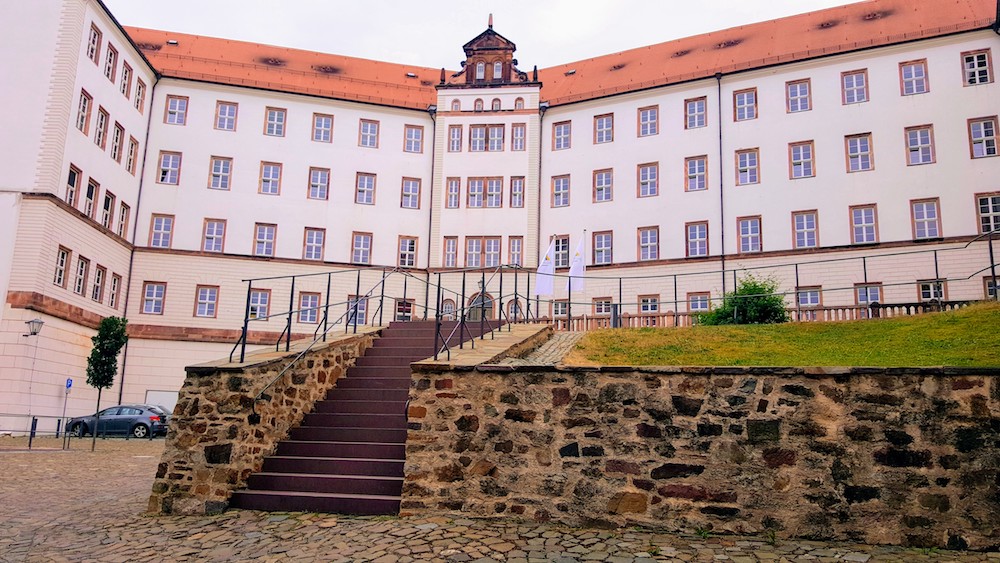 Colditz is immortalised by the tales of attempted and successful ‘Home Runs’ as they were called, each one captivating us during our tour  as we got the inside scoop on so many of the failed attempts and some of the 30+ successful ones.  The French, British and Dutch were the most successful, with the British attempting some 191 escapes; by far the most prolific activists.

Some of the plans were hatched in the most ingenious ways, which goes to show the brilliance and resilience of the human spirit when faced with adversity how their determination is fuelled.  From tunnels, shafts, impersonating German guards and even dressing up as a woman; every method was a serious consideration conceived by genius minds, shared during furtive conversations and whispers in corridors.

The escapees generally headed for the neutral territory of Switzerland, which alone was a journey full of hazard and danger. So not only did they have to get through the challenge of this high security prison, they still had to negotiate their onward journey to final freedom. 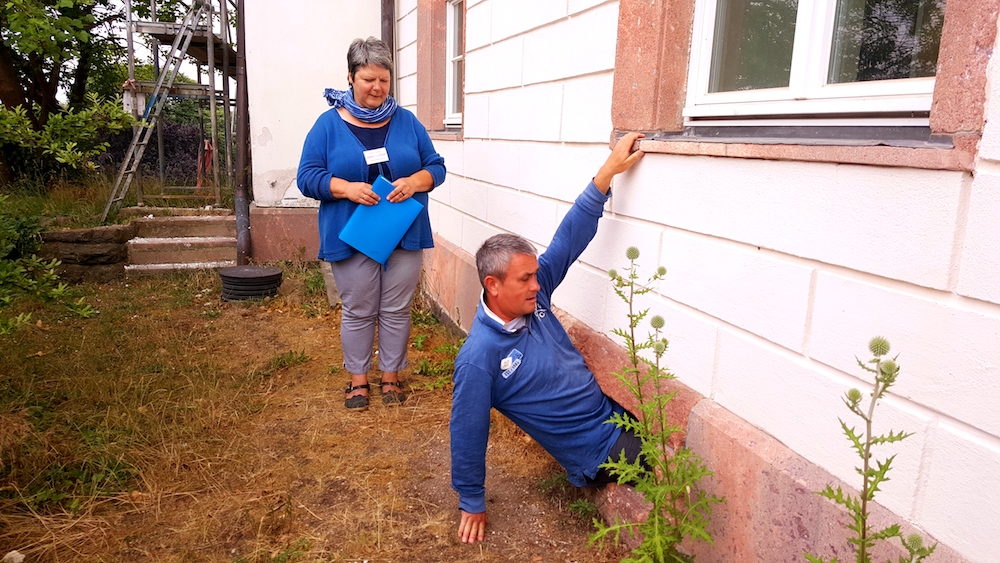 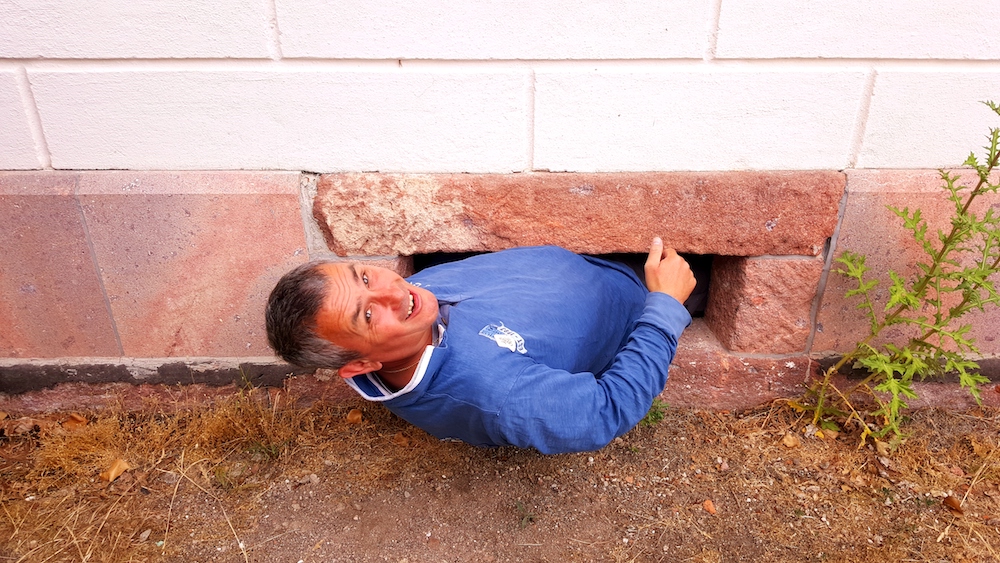 Bar far the most elaborate of them all though has to the epic Colditz Cock – where a team of British Officers designed and built a glider that they planned to launch from the roof behind the Clock Tower, that was hidden from guards’ view.  Such an elaborate plan brought together thanks to a book in the prison library on ‘how to build an aircraft’, constructed behind an artificial wall in a tiny space with tables at the ready for the temporary runway. Fortunately the gallant attempt was superseded by the end of the War and the surrender of the Colditz Prison to the Allied forces. Interestingly there is only one photograph of the constructed plane and all other evidence was destroyed – the reasoning behind which we can only imagine. 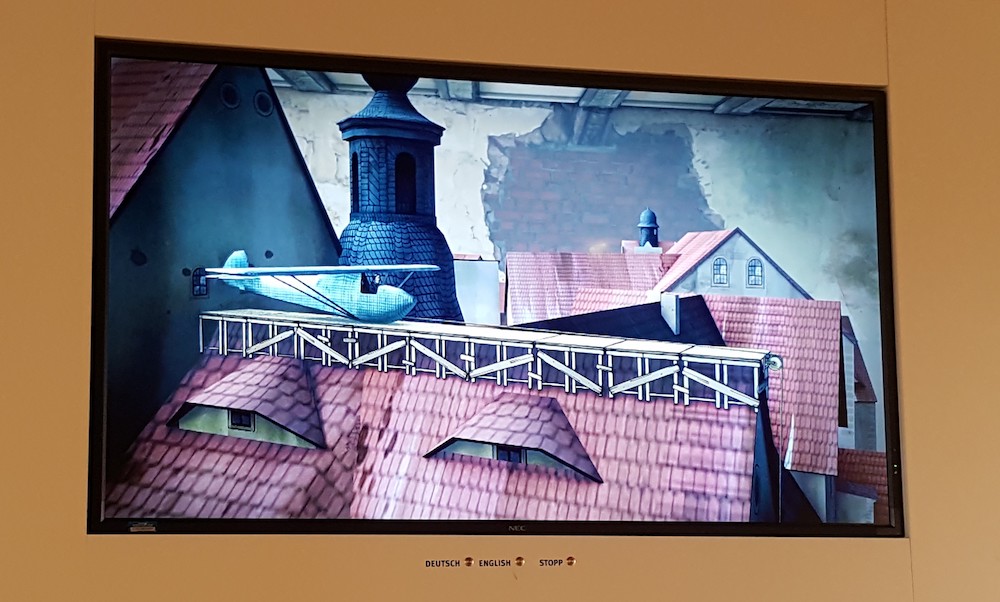 Outside of the castle, which is the main reason for many people’s visit, the town itself is a beautiful and strangely serene place despite its master’s reputation. With a subtle market square with café bars, I was struck by the surprising lack of tourist tat that so often accompanies itinerary hot-spots such as these. Throughout the town, architecture as creative as the prison escape plans will feed your eyes and intrigue your soul as you inevitably walk towards the panoramic bridge viewing point. Here you will gaze in historical wonder at the yesteryears of this evolving masterpiece that has stood the test of time and will be forever immortalised in people’s memories and hearts. 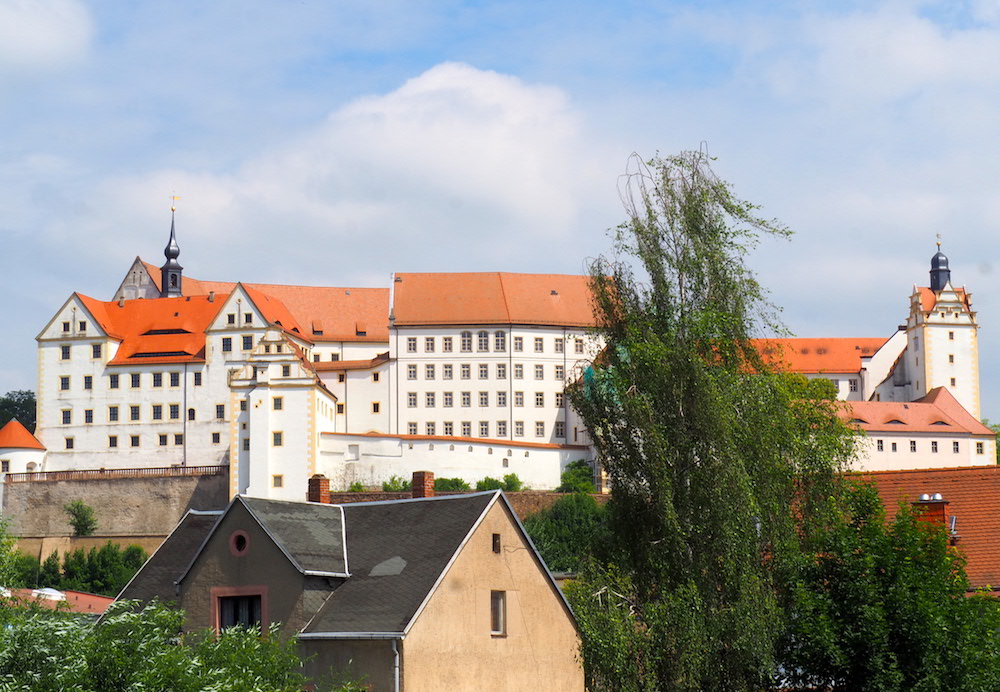 Get yourself to Colditz

Colditz was an intriguing experience. From the facade, this impenetrable building defies you to even think about escape let alone successfully complete what they called a ‘Home Run’.  Yet within its walls you get a strange fusion of bravery, ingeniousness, creativity, solidarity, resilience, craft and above all respect. This is the one thing I have been gifted from my visit. Whilst war is a terrifying and horrible waste of life, the Colditz story shares something more colourful and offers a sense of how strangers with differing beliefs, can not only live and work together they can also create a peaceful culture built on respect and compassion. Perhaps after all there is hope for humanity.