Our Leap of Faith

the story of my life,

I tell of the night we met…”

My God, I had the Marty Robbins classic stuck in my head for the whole day after I met Myles and Karen, The Motoroamers, whilst sat on a cliff top overlooking the Black Sea. It one of those infectious songs you just have to hum along to and that can’t be done without a smile on your face.

A few months back I’m not really sure if I had a smile, it could well have been a grimace.

A bout of stress and depression left me jaded towards a job and a life I should have loved.

Michele and I had the classic aspirational lifestyle, if we wanted it, we bought it. We had to have the lot; the sports car, a German Chelsea tractor,  a 55” plasma downstairs and a 40” in the bedroom and the Caribbean holiday at least once a year.  Come to think of it, I didn’t own any clothes without a brand name on them ( I still don’t, but that is because it will be a long time before I need anything new.)

And to pay for this lifestyle, I worked a  60 hour week, getting into the office at 0630 and leaving 12 hours later, having not even stopped for lunch.  Once I was home, I was then plagued by the phone ringing or that annoying ping of another e-mail arriving. The side-effect of being on the go, was that sleep felt like a waste of time.  So I was existing on about 3 hours a night; it was normal to wake after an hour or so get up for a bit, potter about and then go back to bed. 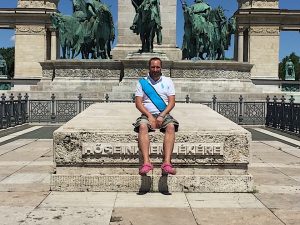 .. it was all too much. I cracked and toys came out of the pram. It was just all too much. Thankfully we had a friendly GP whose only real question was “how long do you need”. That’s not the question you ask a man whose only other time off sick was 6 weeks to recover from an operation, of which I took 2!  Apparently I had to admit that I had a problem.

I opted for a week off, leaving that morning with my prescription for a course of sleeping pills. I felt like a failure. One week passed and with loads of sleep I started to feel normal.  I went from eating one meal a day to two or three.  After the second week, the fog had lifted and I was in need of something to fill my days.  At the time we had an old campervan and I threw myself into updating her, on the dry days and, when it rained (you get a lot of these in March) I started to read a travel blog called “Europe by Camper” – a young couple Adam and Sophie had taken a year out and were driving around Europe.

A 5-year Plan was hatched

It was one of those ‘daydreaming – never really going to happen’ type of plans.  After a couple of month’s rest I went back to work and I was determined, at the beginning, that I wasn’t going to slip back into the old habits.  But as the months rolled on it was too easy to step backwards.

That moment you never forget, happened one Wednesday morning on a cold September day and I pulled into the car park, parked in my normal space and just sat there.  I sat and sat.  I couldn’t go in. Eventually I manned-up and went to work, but the whole day I was a mess…

Michele and I had discussed my hair-brain scheme, and we decided that we would need 5 years so we could be debt-free, buy a nearly-new motorhome and be able to afford to travel for a year. 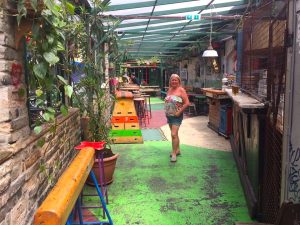 That weekend, that plan changed.  During a typical trip into town for some retail therapy, Michele pulled off the dual carriageway onto the roundabout and straight off the other side.  Not once did she look; not once did she see the oncoming car. Thankfully after a lot of hooting and some angry looking drivers we got back on track.  But what had happened? She had suffered a panic attack.

A trip to the GP for Michele left her with more fear, after rounds and rounds of blood tests and high plasma readings – it felt like it would never end.

After a long, late night heart to heart, we decided that we both needed to get out of the rat race – but how where we going to do it?  We had originally said 5 years, but now it needed to happen yesterday.  So our dear old campervan ‘Roxy’ was sold, the X5, that I had craved for years but only driven 2000 miles, was sold and we started looking for a larger motorhome.  Night after night we scrolled through eBay and Autotrader and, eventually. we found the one.

Enter Paloma – it was time to travel

After a bit of haggling, ‘Paloma’ was ours; a 7m, 6 berth, left-hand drive van ready to travel Europe.  Just the small question of sorting out all the loose ends. 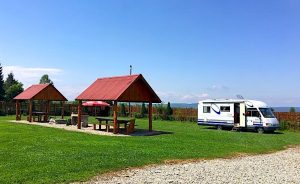 We knuckled down, choosing rather than to go shopping at the weekends, to work on the van, doing all the bits and bobs to make her ready to be our home for the next 12 months.

The next hurdle was Christmas.  This year, like the last, we agreed to not buy presents and, for once I stood by it (last year the diamonds, this year not a bean) – but that meant a whole heap of money directed into our savings for the big trip. We also told all of our family on Christmas Day that we were travelling for a year; they were very supportive and didn’t let on how much they would miss us.

Fast forward to the middle of January 2017, where I’m sat at my computer typing that resignation letter and it was probably the one of the happiest days of my life.  Although with only three months to go, we had a lot to do !

With pretty much all the unused stuff we had collected over years, (why had I got so many screwdrivers?  Probably because I couldn’t find one, so just bought some more) we were ready.  It felt like a long time, almost living a half-life, as the end approached we were trying to live off all the odds and ends in the kitchen cupboards, whilst sitting in deck chairs in our now empty front room, with no tv, no phone and no internet connection.

There’s no ‘going back’ 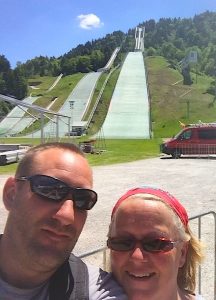 Although the day did come and we hit the ferry port on the 26th of April and we haven’t looked back once!

Someone once said to me that you measure success, by what you had to give up to achieve it, but I now know that I have only given up things that meant nothing to me.  We are so rich in time, that we have reconnected with each other and have fresh faces to take on the world.  And all because Michele was willing to take a jump out of her comfort zone, give up her cosy life and blindly follow me off into the sunset, with my ‘let’s see how it goes’ type of plan.

A few months in and we are not thinking “This will be over next year.”  Instead our mindset is changing to “How do we make this real life last a lifetime?”  I’m not sure either of us could ever, wholeheartedly get back onto the treadmill of work, sleep, work ….. 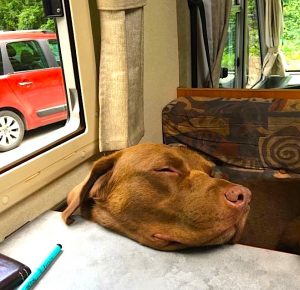 Starts and ends with you.”

Read more about our travels over at; www.ourleapoffaith.co.uk