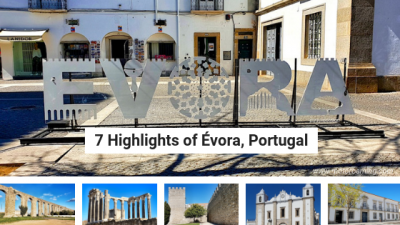 Come to Portugal and immerse yourself in so much more than golden sand between your toes. Whilst the beaches entice any sun seeker, Portugal cries out to be heard on the historical stage. A saunter inland will open up a history lesson that will give your Portuguese experience a depth and context that will not disappoint. And it is the Alentejos region’s capital Évora that offers our classroom today… Come on in and check out our highlights of this ancient capital steeped in Roman and Gothic ghosts.

Where to find Évora

Évora is one of those places that whilst is built up on the outside, offers a compact and charming presence on the inside, sheltering its Roman ruins, cobbled streets and ample churches by protective city walls. Évora sets the scene for battle, conquests and supremacy which vibrate in its very foundations. And such is its importance that it has earned itself UNESCO status and is a member of the Most Ancient European Towns network according to Wikipedia.

No more than 2 hours away from Lisbon, Évora is in easy reach, albeit probably not in a day trip. We headed east from the coast at Comporta for a bit of a beach break and found some amazing off-the-beaten track routes through rural Portugal. Surrounded by landscape littered with ancient megaliths, Évora has a real tale to tell going back 5000 years!

The Roman’s took charge of Évora in 57BC where baths and much of the city walls remain as a testimony to this period. Nearly 600 years later the Moors conquered Évora and they ruled for over 400 years until the Portuguese took charge in 1166. Much of Portugal under the reign of King Alfonso was released from Moorish rule and its identity today is significantly shaped by this epoch. Since then Évora has endured more battles and each time it seems that this small town has been a stalwart standing the test of time and war.

With Évora’s colourful past, each building knits together a visual storyboard to entertain its visitor and these are the magnets that draw thousands of tourists each year. We took our bicycles in to the city, which is not to be recommended as the streets are steep, cobbled and a lot of them are one-way making it difficult to reach places. So we suggest using the map below to do a self-guided tour. Click on the map for an Interactive Tour of Évora.

The Roman Empire is known for its engineering prowess and the aqueduct is one of their legacies still visible today. And Évora’s aqueduct is a great example of their genius. We were lucky enough to be able to park alongside this magnificent and ancient symbol and just a two minute stroll through the city gates, and you can walk the length of the structure to its origin (38.57596, -7.91292).  What is lovely to note is how the houses are built into the arches. There are examples of this throughout the town; modern supporting ancient, what an interesting symbiosis. (38.57147, -7.90975)

Évora’s beating heart can be found in the Giraldo Square. Not really square, more of an oblong, although characterful none the less. It is here that you will find the Tourist Information office which we suggest is your next station stop for a map. A useful phrase is Posso ter uma mapa por favor? Can I have a map please? (38.57063, -7.90941)

From here you can look up towards the regal Saint Antonio church, which has so much personality yet is dressed in simplicity compared to the Gothic architecture that frames the Square’s edges. Giraldo invites you to stop for a coffee and people watch or may be indulge in a Portuguese Nater, especially good if you have a sweet tooth. 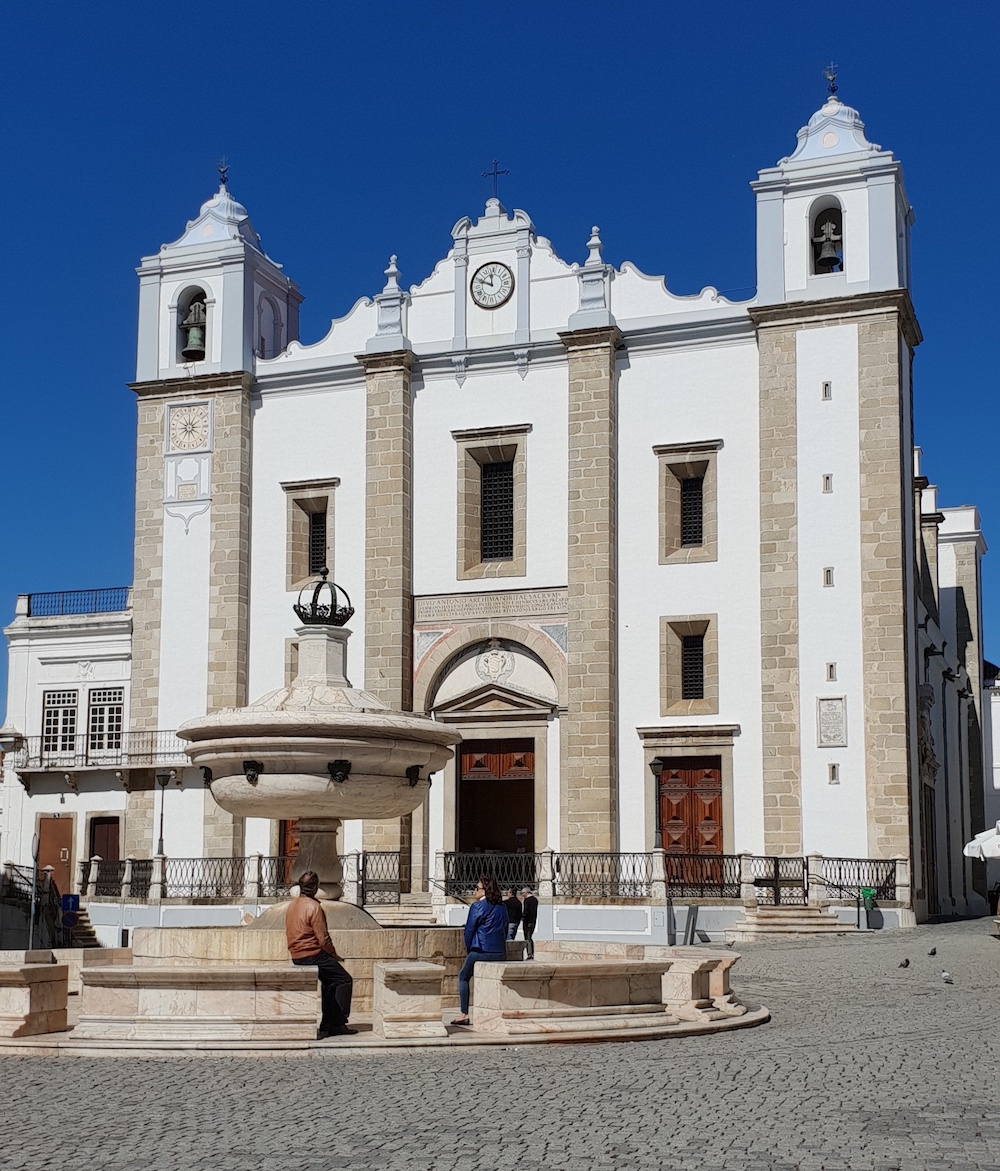 Perhaps one of Évora’s most famous landmarks are her Roman ruins. (38.57259, -7.90729). The temple known as the Diana Temple is in the heart of the museum quarter and somehow conveys a robustness about the Roman Empire. It has itself so much history with its identity changing throughout the centuries. Its role has evolved from being part of the castle, an abattoir and a log store. The ruins are in a remarkable condition and with the backdrop of the Cathedral and the little park, it’s a lovely area to hang out for a bit.  Do check out the view from the edge of the gardens, overlooking Évora’s rooftops and to the city’s exterior.

This old palace is now home to the political hub of the town and its area. This is a magnificent Square bordered by a church and financial buildings.  Entry into the Town Hall is permitted for free, as are the Roman baths, which we wish we had visited. (38.57228, -7.90963)

Aside the Roman ruins, Évora’s other significant draw is the Capela dos Ossos – Chapel of Bones. (38.56873, -7.90884)  For a €5pp entry ticket you can get access to this most eery and yet fascinating place of worship and meditation. This tiny 16th chapel in the grounds of the Church of St Francis is a thought-provoking visit. Built by monks as a solution to the growing number of cemeteries around the town; they interned the bones and in a bid to honour the dead, decided to put them on display within the structure of this building. 5,000 corpses today form the fabric of the chapel; bones and skulls don the walls, the pillars and the architrave. It is the most bizarre form of art; art that holds a message for its viewer, prompting them to think beyond the visual display in front of them – the transitory nature of life. The Chapel makes you reflect on the journey of life and how we rush through the days without pause for the moment. It’s a sobering visit.

Whilst dropping in to pay your respects to the bones, you may be forgiven for feeling so overwhelmed that you miss the Church of St Francis, which is the main body of this area. It sits on the roots of a church dating back to 1200’s. Its Gothic design is impressive and as you walk into the longest nave of any Portuguese church, its gilting will wow you. There’s gold everywhere. It really does deserve a short visit. 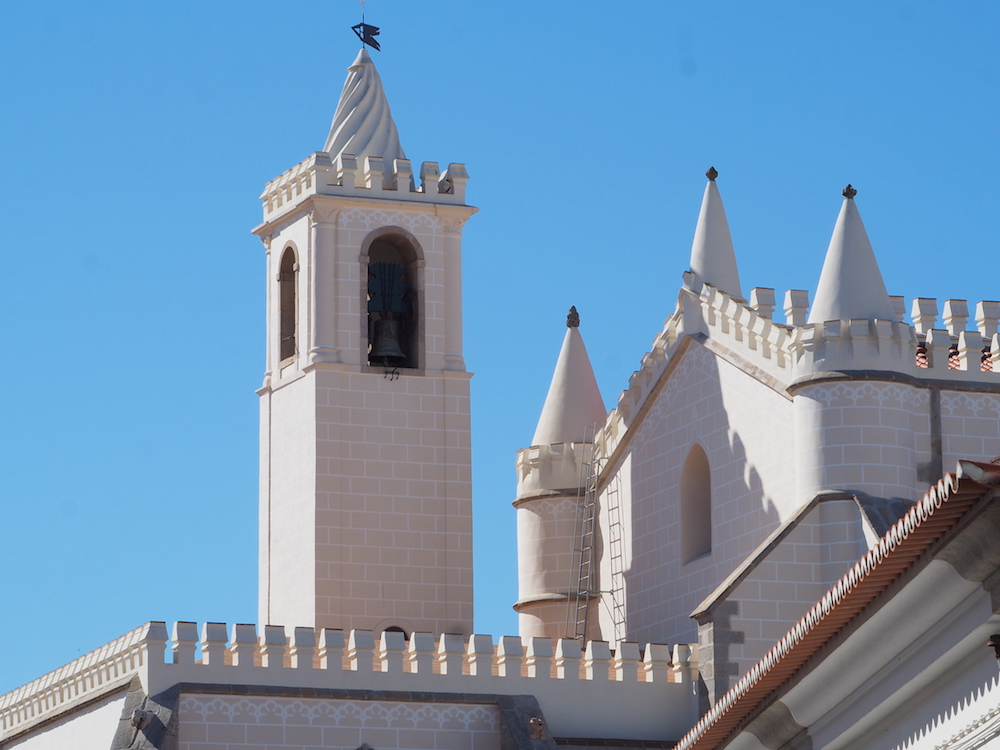 7.  Cycle/Walk around the city walls

After the reflections from the Chapel of Bones, heading to the gardens just beneath the church brings your mind back to the beauty of the world. (38.56734, -7.91001).  There were lots of repairs going on when we visited, although I imagine it is full of splendour in the summer months. With its bandstand and peacocks, it’s a lovely place to wander. And from here you can access part of the upper walk around the walls, feeling the past beneath your feet. And then continuing your route on the lower level, you can trace your steps back to the beginning of your walking tour and end up at the aqueduct once more.

If you love history, culture and context, then Évora will be a great place to visit. If you need a break from the coast, Évora will satisfy your need for curiosity – just for a day. Its cobbled streets are not just atmospheric, they are a piece of history’s jigsaw that will leave you understanding just a little more about Portugal. It will leave you richer for standing in the footprints of our ancestors before we head back to the inevitable draw of the western sunsets and crashing waves. We highly recommend this little detour in your Portugal tour.

Why not pin this for later? 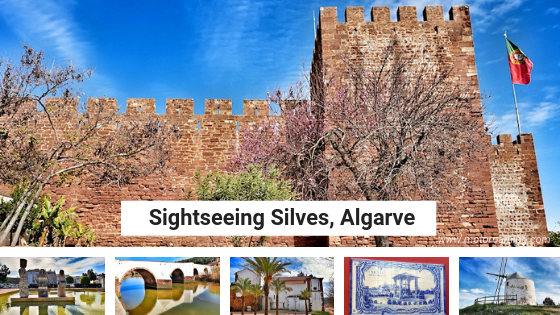 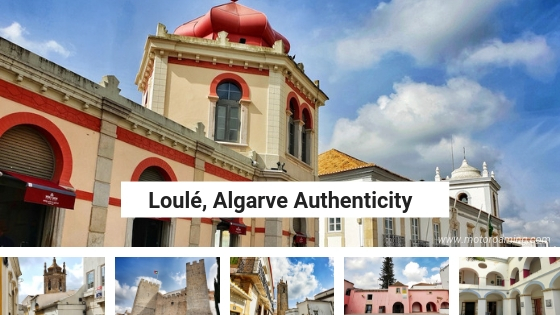