As I write about our Greek adventures for a magazine article this week, I have noticed how many posts there are on Facebook about heading to this luscious land this year. I’m sure it’s always been a popular destination – after all who wouldn’t want golden sands, white washed, cobbled-stoned street villages and azure blue seas! I’m in!

As we had a glorious 3 months there touring in our camper, a month of which was in Crete I thought it would be worth putting together a resource that captures all of our experiences, lessons, places we visited, and camper stops just in one place. A one-stop shop if you like. Of course the normal caveat applies – we didn’t visit everywhere – you can’t possibly in three months, although we gave it a good shot and managed to get to see a diverse range of places on Islands, mainland and the Peloponnese. So sit back, relax and soak up the goodness that is Greece.

This map gives you a good sense of our places of interest and our camping spots with co-ordinates, if camping is your thing. Just click on the dots for more information. 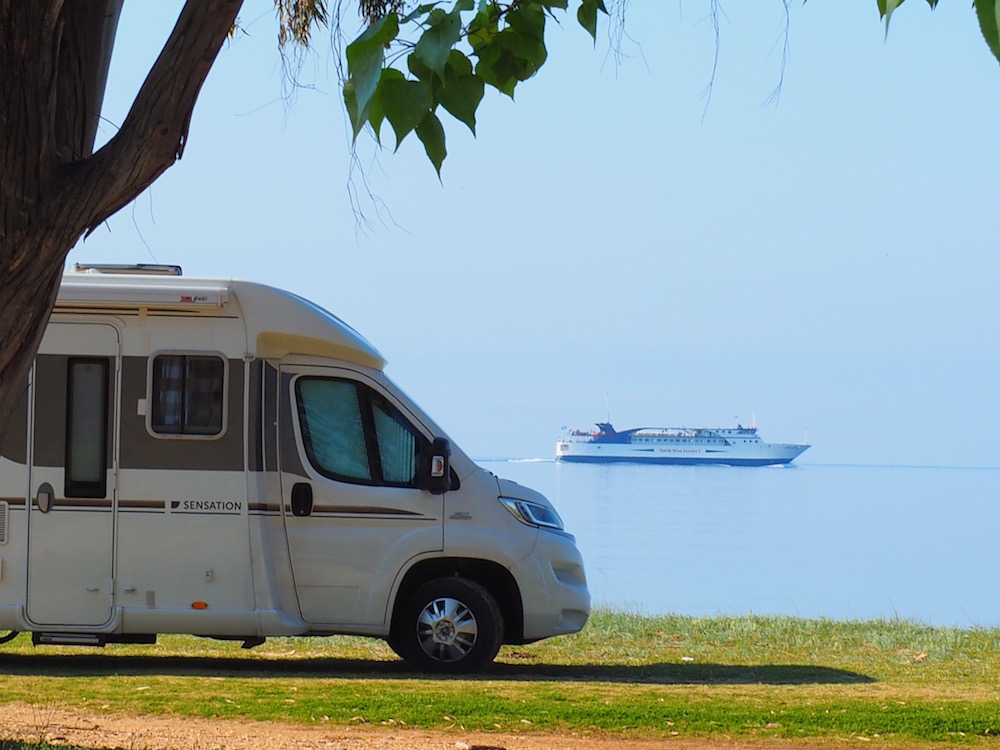 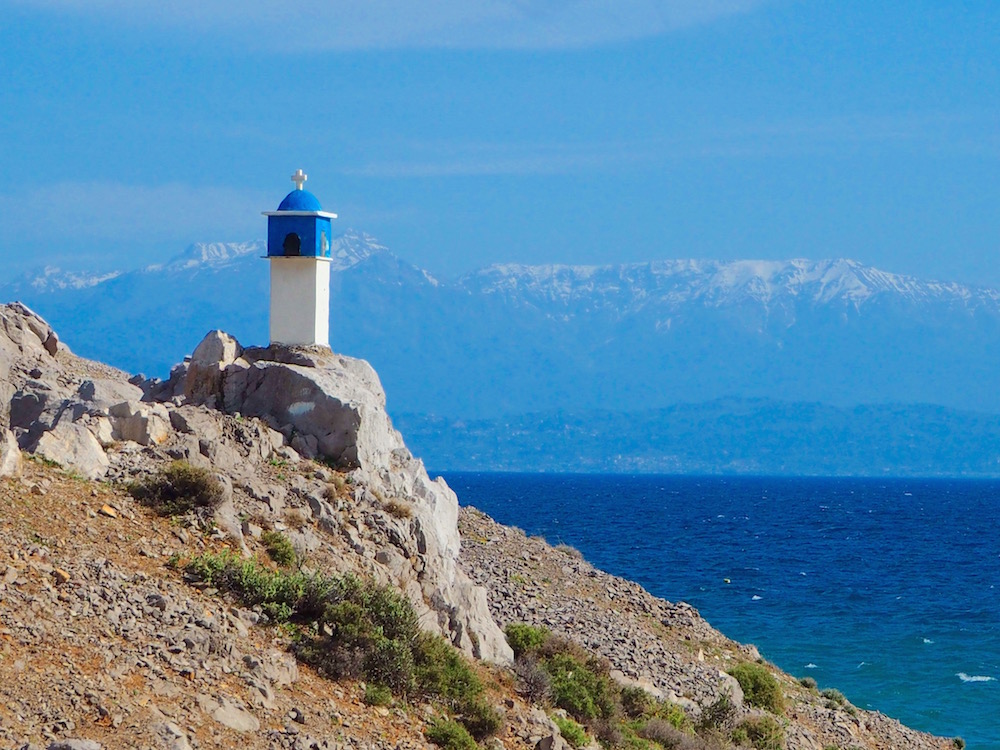 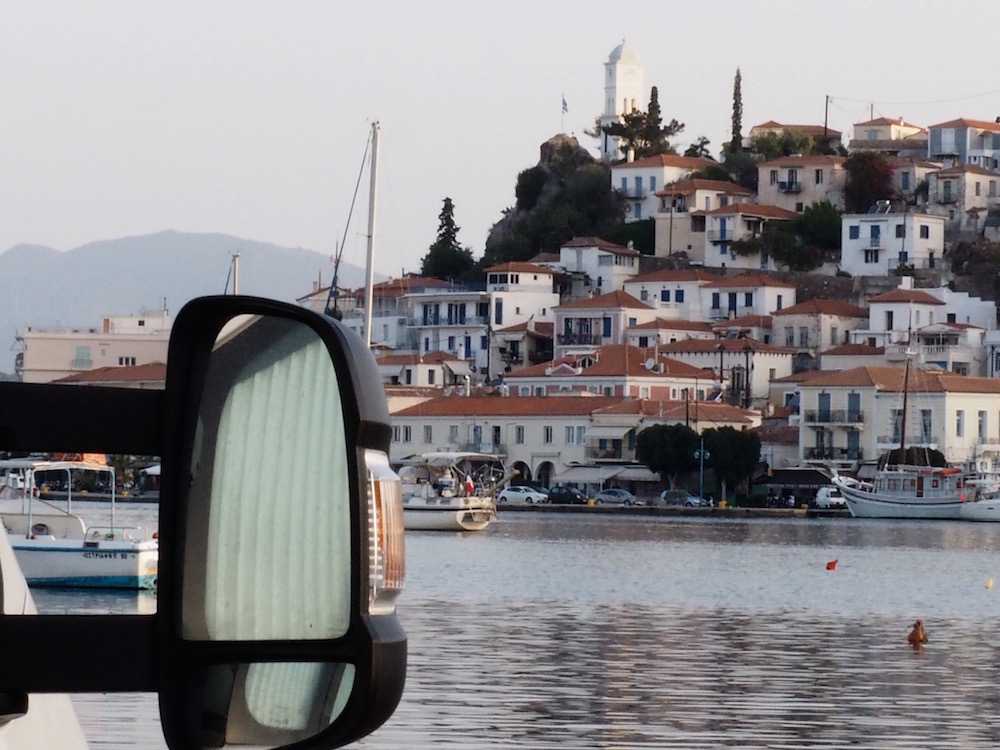 There are many ways to get to this gorgeous land;

We took the ferry from Spain to Italy, as we spent winter there and then hopped across the Adriatic Sea from Bari to Igoumenitsa. You can read more about the ferry options from Spain and Italy by clicking here for our comprehensive blog. 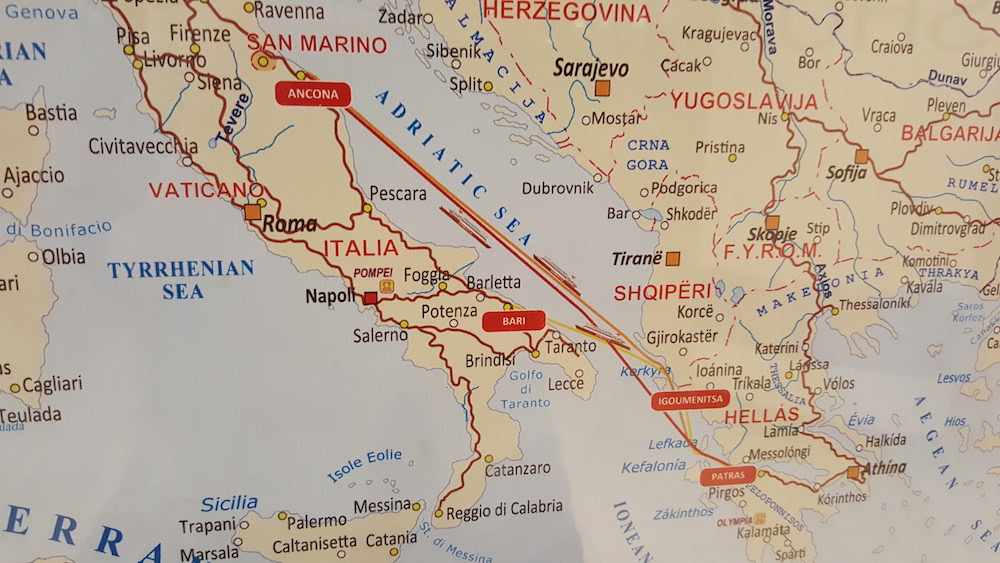 Greece Mainland – it’s a must

Many of us when we think of Greece immediately conjure up the iconic images of the lslands, steeped in glorious sunshine and to-die-for beaches. And whilst it’s true, they are certainly devine – (who wouldn’t want to see Santorini at sunset?), there really is so much more to Greece. The mainland in particular is a jigsaw of diverse pieces that, when put together create a map of historical intrigue, natural wonders and an authentic off-the-beaten-track perspective.  Here’s our highlights, just to whet your appetite;

Metsovo Lake where your only neighbours will be the sheep dogs and the odd bear or two, if you are lucky to see them. In an incredible landscape high up in the Pindos mountains and with a little hop, skip and a jump you can check out Metsovo – a characterful mountain village that thrives on local tourism and agriculture. 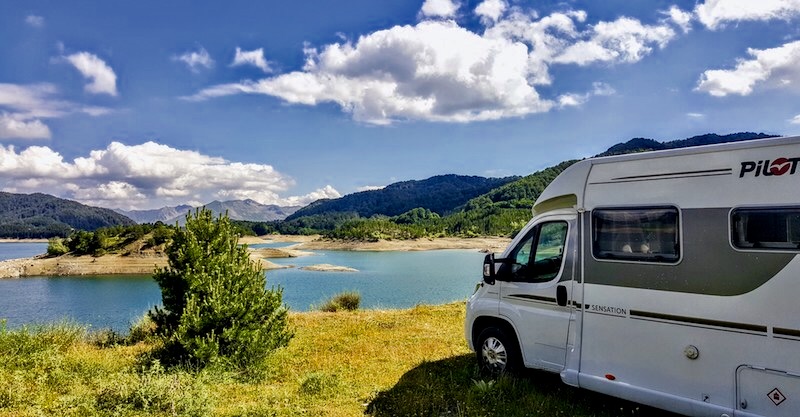 Kastoria a byzantine town hidden in the mountains with its own mirror lake. A town that has prospered historically under the fur-trade banner and more recently attracts international rowing athletes. And if caves are your favs, then you seriously need to go see the Dragon Cave, which is the third largest and longest in Greece, with seven underwater lakes and chambers like you have never seen before. And then there’s the bird life which with its 100 plus pelicans, grebes and warblers you will be in ornithological heaven. Here’s a glimpse of what is in store for you at Kastoria.

Kerkini – the place where land succumbs to water as this wetland nature reserve protects hundreds of bird species and where water buffalo wallow in the bogs creating their delectable cheese.  Take the sunrise boat ride to see the birds in their natural habitat and be bowled over by this preserved landscape. . 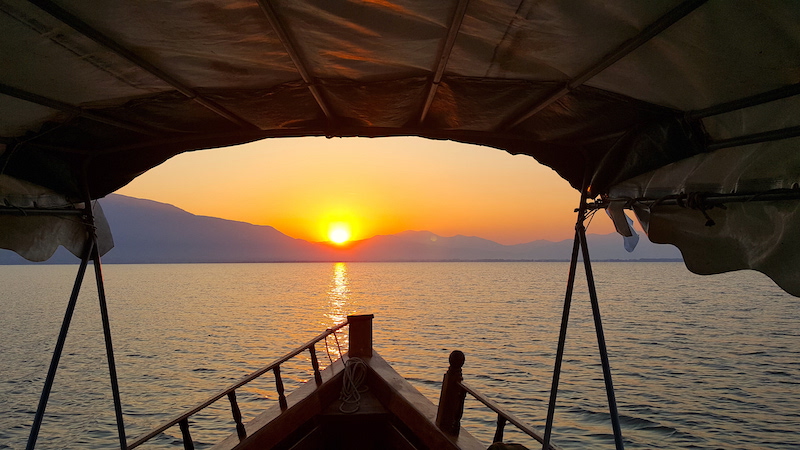 Meteora – a surreal and atmospheric place that looks like something out of a James Bond movie-set. Where sandstone rocks rise to the sky with six monasteries atop. An early morning visit benefits you with swirling mists and shafts of light caressing these magnificent buildings that make you wonder at their engineering feat. It’s a busy place, so beware of running the gauntlet with the caterpillar procession of coaches. Make the most of your trip by following our free guide. And don’t miss the incredible drone footage that we captured.

Parga and Lefkas – the west coast of the Greek mainland offers a town that Italy’s Cinque Terre would be proud of with its colourful terraced houses overlooking its double bay. And Lefkas, the only island you can drive to, is more like something out of an Indian Ocean brochure, with its white sand beaches.

PELOPONNESE – AN AFFAIR WITH THE SEA

So many visitors flock to the Peloponnese, three fingers and a thumb of the most spectacular coastal scenery you will see. Coves, bays and headlands will greet you here, with the earthiness of nature’s battle and yet the grace of a seagull. Don’t miss out on the Diakopto Railway that will take you to the mountain village of Kalyvita, scene of the WW2 Massacre in 1943 and then the Corinth Canal which tells a whole different tale. The ancient delights of Epidaurus with its Amphitheatre and Healing Sanctuary will no doubt impress or perhaps  its coast will have you exploring the underwater cities with your kayak or snorkel. Methana and its volcanic delights reminds you how fragile our world is and how the earth’s core still runs the show from beneath the surface. Climb up to Methana’s largest volcano via its lava paths and even enter into its shaft – it’s like being on the moon and the scenery isn’t bad either.  Check out our video here and our blog.

At Galatas, just a little further round the coast you will gasp in amazement at the first real sighting of a traditional Greek village. The island of Poros, which is just a €1 ferry ride away is a delight for fisherman, sailors and visitors as you wander the cobbled streets and immerse yourself in authentic Greek culture. It is a pretty surreal place only really captured by our drone – the pictures simply don’t do it justice…  Here’s our blog on the area…

And the ancient capital of the Peloponnese, Napflio with its mesmerising coastline and crystal waters will lure you and surprise you with its three castles, suggesting its historical prowess. The old town is stereotypically Greek with its alleyways linked by magenta bougainvillaea, cafe culture and cobbled stairways leading to the real Greek lifestyle rather than the tourist one. And don’t miss the mind-blowing ancient citadel of Mycenae, just 20km drive north where you will be transported to 4000BC and will get to gasp in humility at the advancement of this age with their water system and jewellery making capability. All of which would look at home in our high street shops.

The Peloponnese Thumb is a great introduction to the area and a delight to behold. 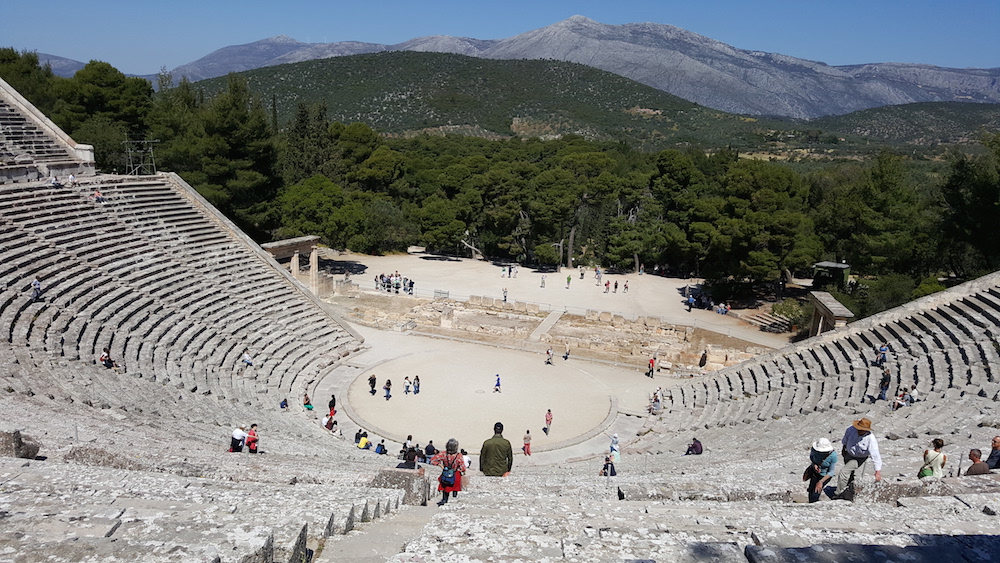 Firstly let us say that Greece is wild camping paradise and as long as we are respectful and aware of our surroundings, you can pretty much overnight anywhere. We found some amazing spots, partly thanks to our Greek wild camp guide  – Mit Dem Wohnmobil auf die Peloponnese. Although it is in German, the co-ordinates and pictures are more than enough to go by in choosing a home.

We also followed pins that have been collected by previous campers such as Peejays, although we also found our own spots along the way. This is one of our favourites at Porto Cheli on the Peloponnese.

As you’ll see from our interactive map, there are a fair few camping options and whilst campsites are not profuse in Greece, they do exist. Bare in mind that many of them are only open from mid April until mid-end October. That said, if you’re happy wild camping, then going into an official site will only become necessary to off load and fill up with a bit of washing on the side.

Water filling up is easy – every beach and marina have showers that you can fill up from and many mountain villages have fresh water springs. So you’ll never go without. For black waste we had a number of solutions for this. First was to go to a Garage, where they often had outside toilets. In exchange for diesel they would give us permission to off-load, given that we don’t use chemical products in our toilet. Secondly, we would ask permission from campsites that we found along the way, whether we could use their facilities. Despite always offering to pay for their services, they rarely took it and were very happy to help. We were only refused once and we kind of understood why.

Getting by in Greece

Life is very easy in Greece. There’s no need to rush and the weather is generally great even in Spring, except for the afternoon wind that always springs up like a bad smell, every day. Although let’s face it, it was a warm wind!  Driving was pretty good on the whole, although some of the roads left a little bit to be desired. We learnt that when searching for a place to stay, to park up and explore on foot rather than risk taking the van and getting stuck. It happened once and we didn’t repeat the error.

Eating out is cheap and delicious and one of the best places in Europe to get lamb.  The cost of living is pretty much the same as Italy and France. Still with the amount of wild camping you will do, you will definitely be in pocket.

During our first month we learnt plenty – and so we gathered all our lessons in one place so that we can easily share these with others. We also have compiled a ‘Getting By in Greek’ document, which is included in this blog that will help you master some of the language basics – the Greeks, much like any nation love to hear visitors speaking in their tongue. Click here for our insights and your Language Guide.

And so there we have it – Greece in a nutshell – at least based on our experiences there. It really is a fabulous love affair with the landscape, the culture and the people.  Want to know what all the fuss is about? Then go and start your own Greek Odyssey. It will enrich you, entertain you and enthral you. Your visit is callin you…. 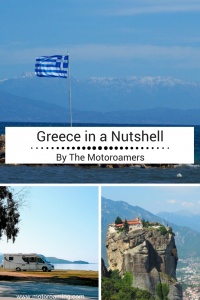