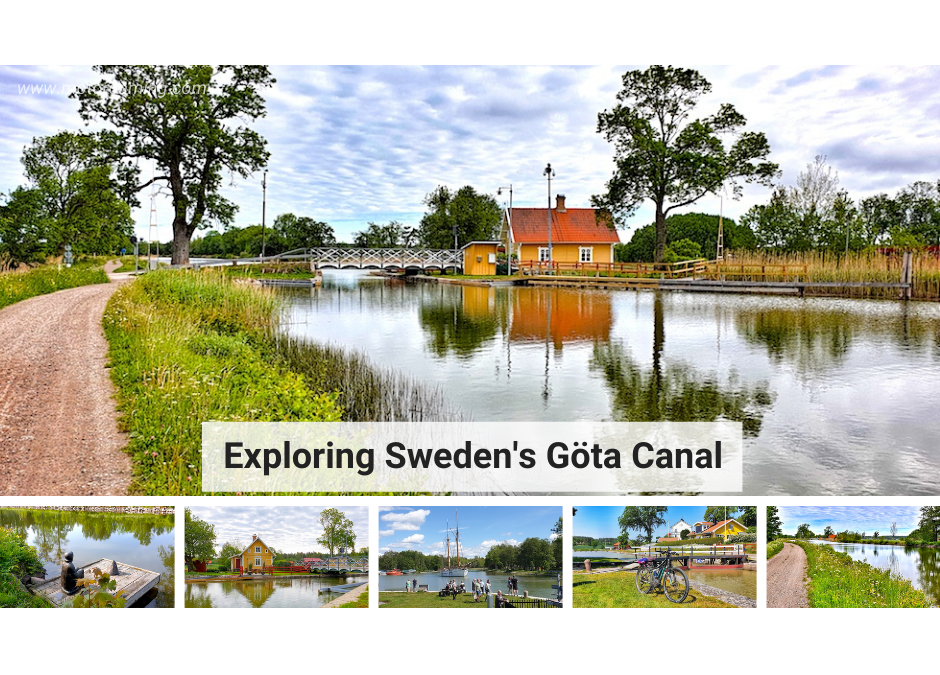 Ever thought of the Göta Canal for your Swedish itinerary? I suspect not – it certainly didn’t make our initial agenda.  In fact I didn’t even know Sweden had a canal until we crossed over from Denmark. That’s why I love travel so much – it expands your mind and horizons. And like many, up until recently I was sure Sweden’s Top 6 were; Abba, Ikea, Albert Nobel, the Ice Hotel, herrings and meatballs. Now I seriously know better.

We hope after delving into this little visual storyboard and video, that you would consider putting the Göta Canal on your Swedish adventure.  Let’s see if we can inspire you.

When we arrived on the south westerly shores of Sweden as part of our 2019 Summer in Scandinavia road-trip we had a choice; turn right and head along the southerly coast or left and head north towards Gothenburg. After a bit of Googling to find something off-the-beaten-track, I found the Göta Canal! Decision made, we turned left.

Having grown up from the age of 12 around canals and narrow boats in England, I am pretty used to the waterway network and the sublimely tranquil way of life. So how perfect to visit something so close to my heart and my family roots. Plus I had never seen the Göta Canal profiled anywhere on any other blogs. We love going along the road less travelled and although my research suggested that it was popular with the locals, it didn’t have a tourist destination feel about it at all. This had our names written all over it.

Sweden’s southern canal system is a man-made waterway constructed in 19th century connecting Gothenburg in the west with Söderköping in the east, just south of Stockholm. The entire stretch is 382 miles (614km) and its navigation takes on three very distinct personalities;

The canal’s vision was the brainchild of Hans Brask in 16th century although it took another 300 years for it to come to fruition. Thanks to the efforts of Von Platten, a German-born officer in the Swedish Navy, the revived plans got royal approval with King Charles XIII believing that it would give Sweden a modern edge. So in 1810 the canal’s construction began. It took a massive 22 years to complete with the help of canal guru Thomas Telford from England and was mostly dug out by hand, by 58,000 men. It was officially opened in 1832 although sadly it never really became the success that Von Platten had anticipated. The railway soon took over as the favoured form of transport given that it was quicker and was unaffected by the winter, unlike the easily frozen canal.

Now the Göta Canal’s only commerciality is its tourist value – which ranks as one of the most popular destinations for Swedes. With its route crossing the entire country, this is an incredible way to experience Sweden; whether alongside the waterways on it’s well organised tow-paths or with a watery perspective, aboard boats or cruise liners.

Starting (or ending depending on your perspective) officially at Sjötorp at the easterly edge of the Vänern Lake, the Göta Canal begins its journey. Winding through gorgeous countryside, through small towns that have grown up along its path it takes you on a colourful cultural experience with a historical shading. Ending up at Mem where the canal then accesses the Baltic Sea, where the salt tantalises the canal’s fresh waters. This canal is a beautiful work of art to be admired and enjoyed.

The 58 locks along its 120 mile route (190km) offers the sailer a challenge of manually operating these feats of engineering. With two or three locks in close or immediate succession, this is a steep learning curve for the inexperienced boat handler.  Although with plenty of marinas en route to offer sanctuary for frayed nerves, the canal soon casts its magical spell. After all who can be stressed going 3 kph?

For the Active and Leisure Seekers

From start to end, the canal provides an opportunity for cycling, hiking or cruising – letting someone else navigate the tricky locks. The tow-paths are a great way to experience the Göta Canal. And along the way you will come across beautiful Slusshus (Lock Houses), churches, castles and small country roads that criss cross the waterways with swing bridges allowing the nautical traffic to pass.

Whilst there are two major lakes that the Göta Canal crosses through, there are a number of smaller lakes too, such as the Viken.  They all have their individual characters and offer sailors navigational challenges to reach the next stage of the canal. This is boating heaven and for those behind the wheel of a land vehicle, the drive around the lakes is also wonderful. Through forest and on deserted roads with teasing glimpses of the lake between the trees, it’s just delightful even by road. 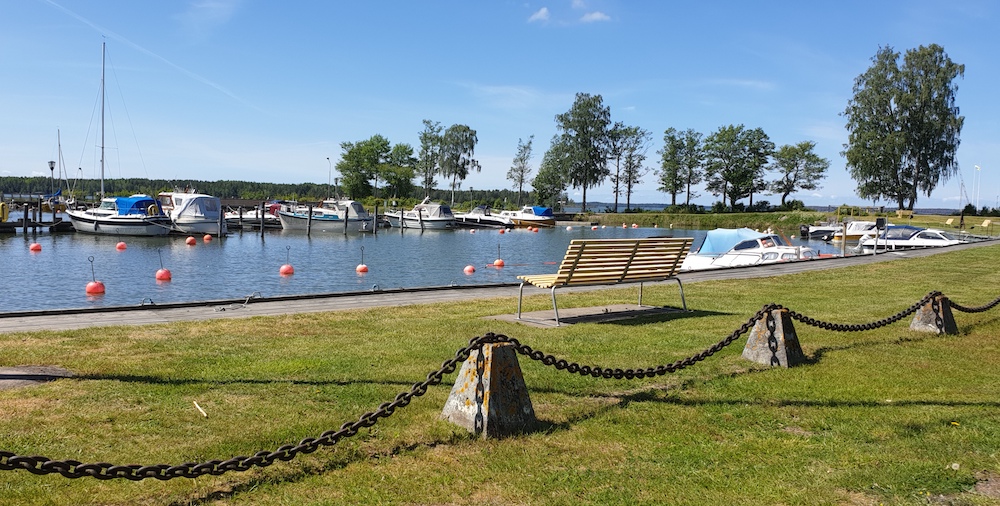 Across the canal you will find artwork structures to catch your eye. Local artists offering their talents to the canal’s landscape. And then there’s nature’s own artwork. With lupins, carpets of pink blossoms and rhododendron in spring, this is a veritable feast for the eyes and the soul. And for a more historical marker, check out the 200 year old Ell Stones that are positioned at 600m intervals across the whole length of the canal. These were used to measure the fee payable by the ships as they sailed across the country.

One of the things I love about waterways is the variety of boats that people choose to cruise in. You might be lucky to see ancient clippers, like the MS Mina we saw at Sjötorp, one of the oldest sail boats in Europe dating back to 1876. More likely SUP’s, kayaks, sail boats, motor cruisers and cruise liners, you name it, Göta got it all!

And finally…. If you, like us choose to bring your camper and explore the canal as landlubbers, then there are plenty of places to park up. There are marinas along the whole stretch of the canal and here you can stay for a fee of 225SEK per night (£19) which gives you electricity hook up, showers, service facilities and a gorgeous view. So you can navigate around the lakes and weave over the canal and get a feel for each stage without getting your feet wet. 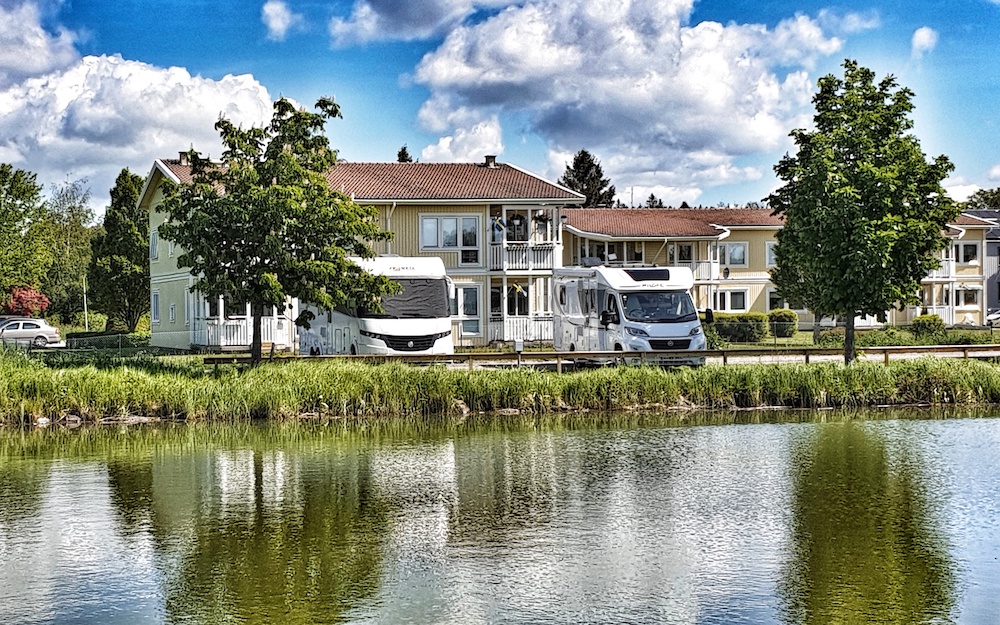 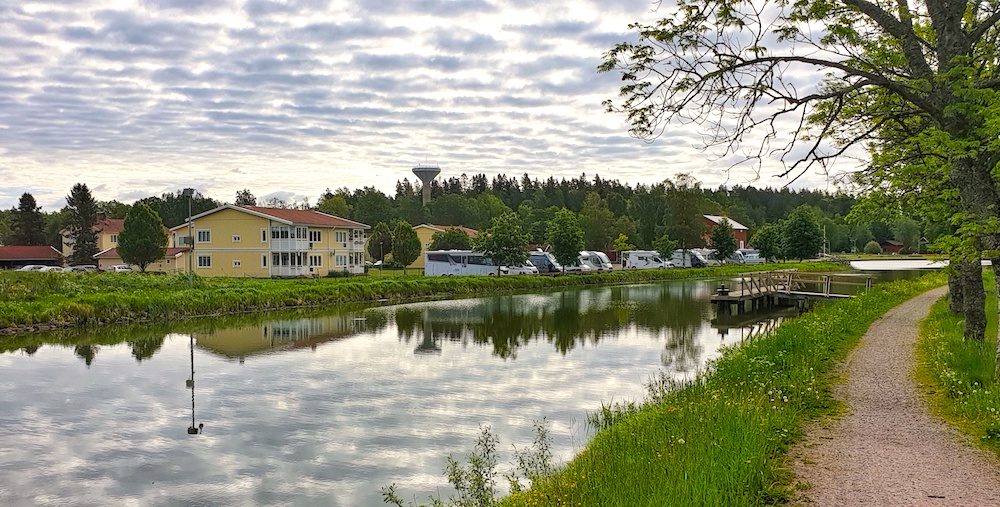 So, there we have it. Our visual storyboard of our experience of the Göta Canal.  If you are looking for something different, a destination without hordes of tourists where you can watch the world go by, as you meander from east to west, then you’ll not be disappointed by the Göta Canal. It epitomises peace, tranquility and history and is a great feature for your Swedish road-trip. We urge you to consider it.

Want to save for later? 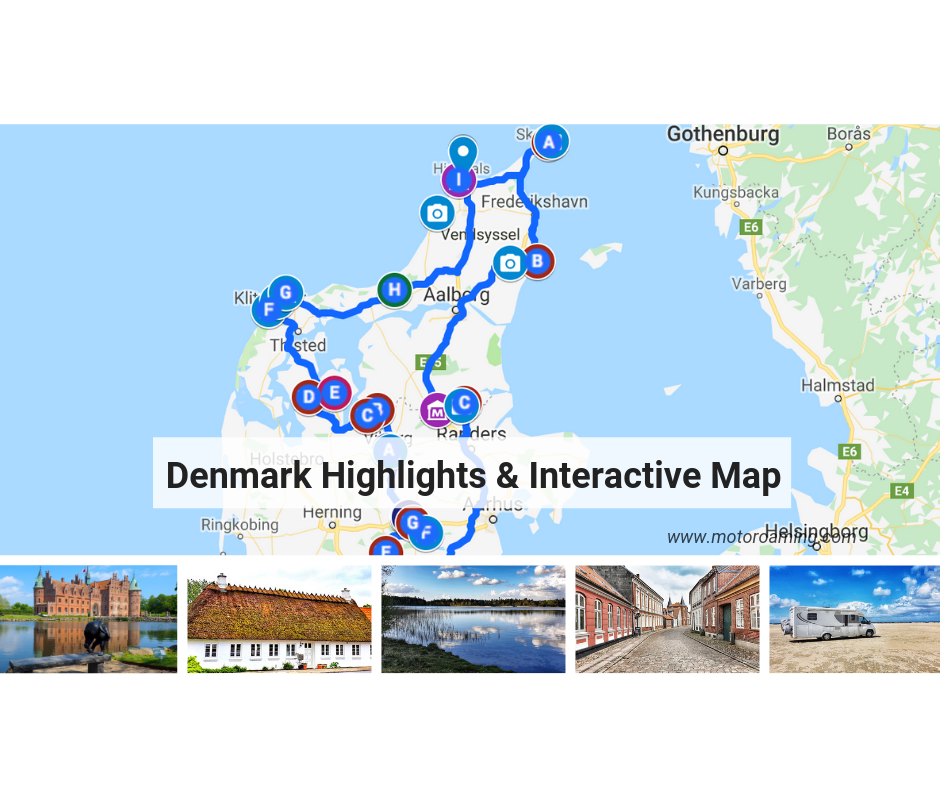