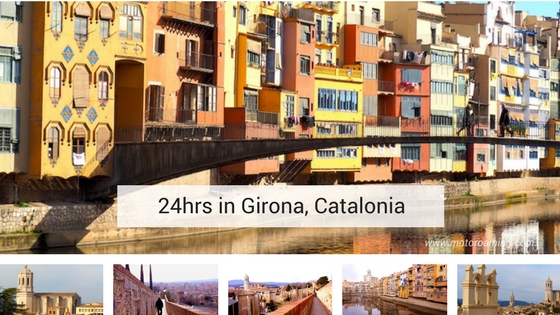 The first thing that struck us as we arrived in this Catalan city was how quiet it was. I suppose we have comparisons of London, Birmingham, Paris even to benchmark it against. Few cars lingered at the lights and few people were rushing from street to street. It was lunchtime and a Friday in mid-winter, so perhaps the Spanish siesta was dawning or may be this was just the city’s quiet heart-beat.

As our exploration began, only the deep resonance of the Cathedral bells that vibrates through your veins and the odd fusion of seagulls and parakeets seem to pierce the silence. And yet Girona could so easily be missed off the travellers’ agenda in their haste to head south to coastal retreats or in the mad dash north with their luggage crammed with Rioja and Chorizo. And it is true for us too, as it has taken us until our third Spanish road trip to drop in and say ‘hi’. So what is our view of this proudly Catalonian city after our brief sojourn ? Let’s see if we can give you a flavour of our experiences and then may be it will prompt you to go and make up your own minds. 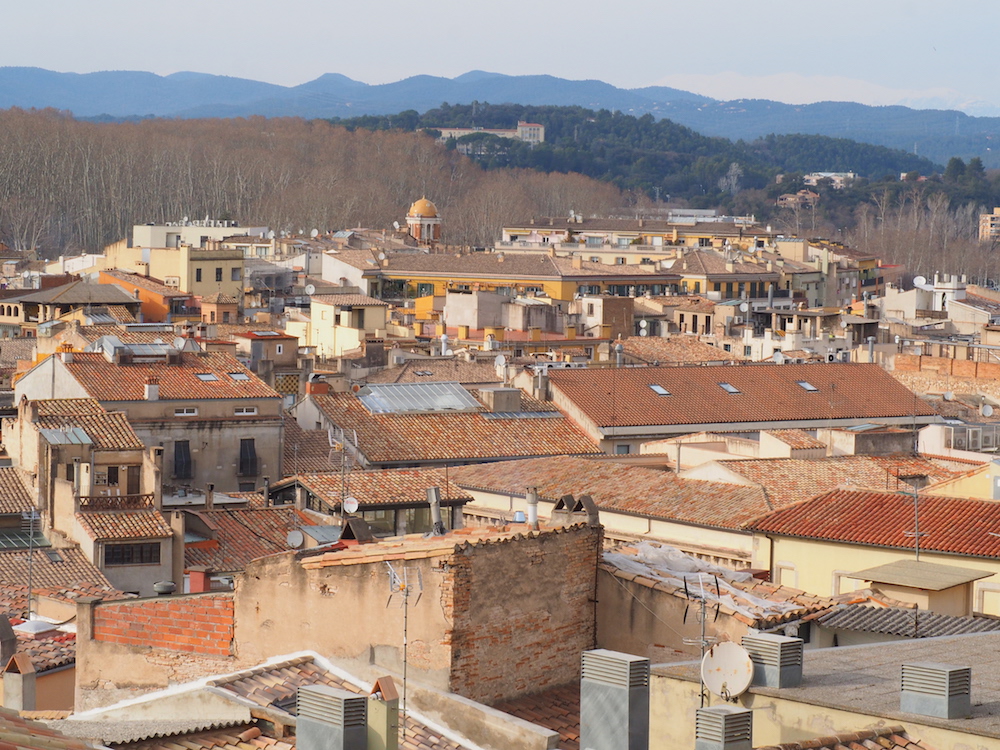 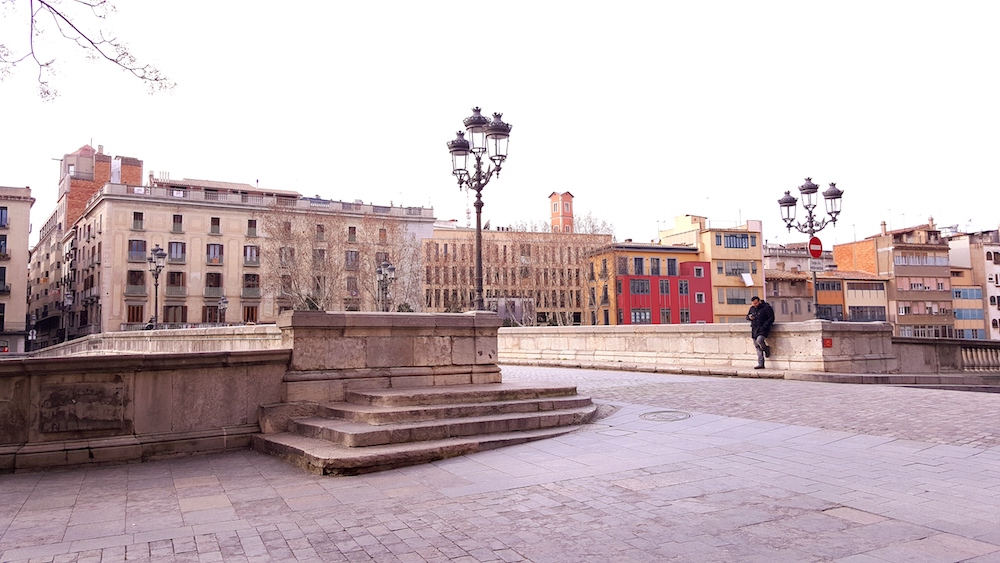 As with most cities we’ve visited in the last two years of being on the road, there’s the old and new. And of course it is generally the ancient face we come to admire, as the outer fringes of industry and high rise where people create their homes and their business, has little to offer the curiosity seeker. Girona in that respect is no different. Nestled just below the foothills of the Pyrenees, Girona is blessed by stunning surroundings however your entry to the city is made. We came from the south west, Manresa to be precise, and our route through the snow-capped, densely forested mountains was a great set up for our city tour.

In the Spanish guide books there is little space dedicated to Girona. Barcelona and Seville certainly win the competition on that score. Although don’t be fooled by its lack of representation, as when we made our way from our inner-city camper park along the edge of the Devesa Park with its plethora of larch trees, I felt the anticipation grow. Despite the railway that dissects the old from the new, yet again we were struck by the lack of noise and buzz. A quiet station, few trains, only its metalic presence gave it away.

And then our first real sight of this unassuming city, carrying a historical weight on its shoulders, emerged as we approached the river.  With copious bridges that span a trickling River Onyar before the Pyrenean snow melt fills the riverbed, we felt immediately transported  into Girona’s soul. The colourful five or so storey buildings proudly hang their Catalan flags, propaganda and washing from their balconies like it’s a natural part of their decor, giving it an almost scruffy, yet lived in feel.  It reminded us a lot of the Pontevecchia in Florence just on a smaller and quieter scale. 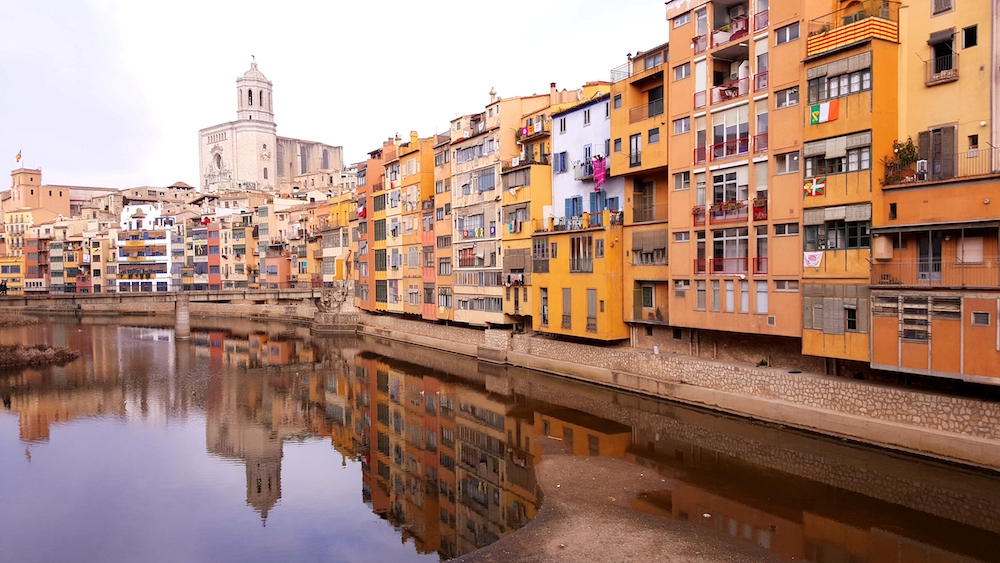 Crossing the bridge felt symbolic as little did we realise that entry through the archway would take us into the heart of this somewhat somber city; the facades of the river-fronted buildings belying its inner sanctum. I’ve been trying to think of an adjective that best describes Girona’s historical old town and I think somber real does it for me. The streets, whilst full of Italian-style shops selling sumptuous clothes, shoes and leatherware are generally narrow and dark. I felt as though I wanted to sand blast the streets to bring it back to its former glory. Although in the darkness lies the truth of its history, so to remove it would be to strip away some of its legacy.

The dakness aside, in contrast the city’s cathedral and monuments are almost albino white, matching the distant Pyrenean mountains that provide the backdrop to the cityscape.  With a minimalist style to their exteriors, simplicity shrouds this city. It is not out to wow you in the same way Seville does. It invites you to enter its inner hub and engage with its historical tale that spans back some one thousand years.

The main thing I learned from my guide book was to head for the Passeig de la Muralla – the city walls – as this offers a terrific bird’s eye view. And indeed what a great piece of advice. So often visiting cities we feel like ants as we try to get a full experience of the majestic buildings, somehow missing part of the jigsaw by being on the ground. Yet from above we were able to see the full picture emerge and the city’s modern day identity trying to converge with its historical father-figure.

There are a number of entry points to this upper fortress passage. We started at the Cathedral end and worked our way south. En route to its maze-like entry, we passed the Banys Àrabs, the Romanesque Baths, which is very much intact and for €2 you can gain entry to this ancient masterpiece. A point to note, during the winter this is only open from 10-2 so be warned if a visit is on your list. Sadly it was shut for our city tour. Still, onwards we climbed up the seemingly never-ending stairs that lead to the walls, where towers positioned in battle readiness gave us a lofty view of the streets below.  The walls have been lovingly and sensitively restored allowing us to walk in the footsteps of warriors who were set on defending their realm. What a terrific way to experience this compact old town. 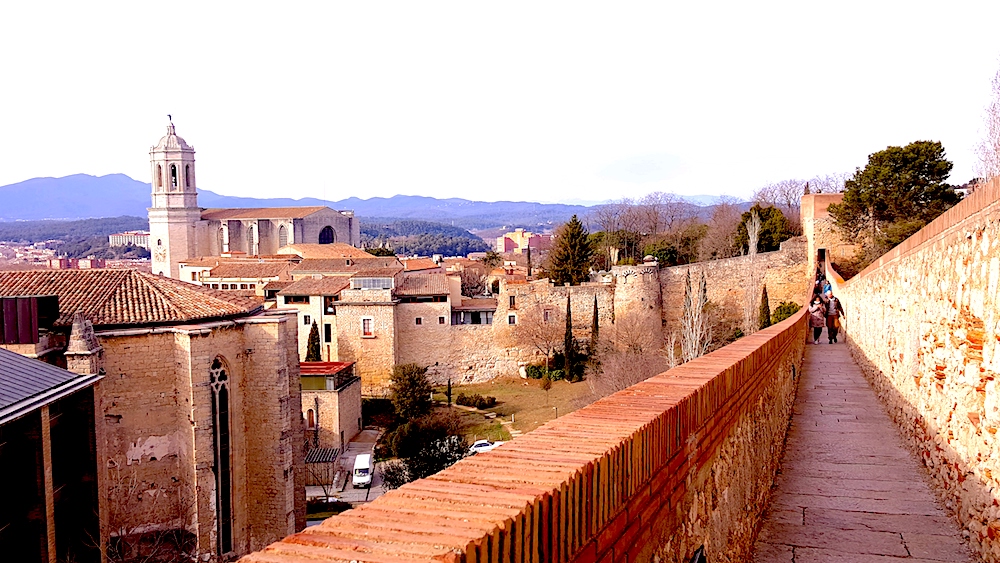 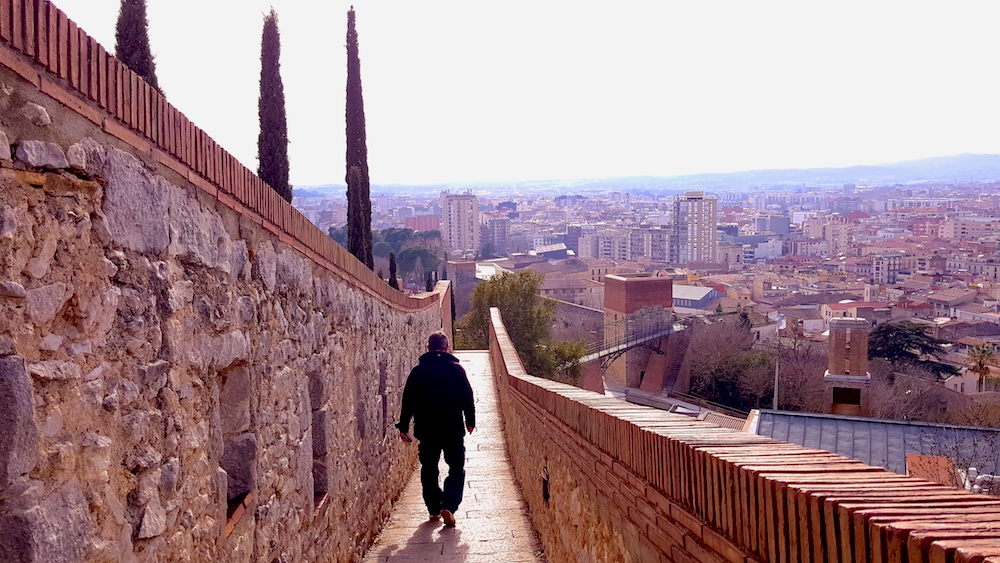 Back down at street level, we found the river again, where still few people graced the pavements. Yet a handful of hardy Catalonians brave the crisp winter’s grip that has taken Spain by surprise this year, sit outside for their early afternoon beer. Shops selling an enticing array of pastries more suited to a French boulangerie border the streets, reminding the visitor of its neighbour’s influence on its language and culture.  Having thought we were finally getting to grips with Spanish vocabulary, arriving in Catalonia is another challenge altogether for our foreign tongue. So many variants remind you that the locals here are set on creating individuality and independence even if they have been ruled against it.

The Jewish quarter was one of the largest communities in Catalonia back in 13th century, living harmonious alongside their Christian neighbours. Although after racial attacks, a massacre and persecution, the Jewish population either converted or were expelled from the country. Their community is called the Call, translated as the ghetto and museums today tell of their harrowing story whilst the street, with its intricate alleyways and cobbled lanes still hold their sombre secrets. It is a street with little light, which somehow seems befitting and symbolic of their story, with buildings leaning precariously close together as if in some sort of constructive solidarity.

It felt odd to me as we left the solemnity of the street’s ghostly past that the faint and gentle sound of a street musician should break the historical spell, as he played to his unappreciative audience on the steps of the Cathedral. Except for me who felt compelled to offer him rapturous applause for his musical talent.

The Cathedral like so many, regales in its architectural glory with steep steps climbing to its doorway, as if forcing you to make the commitment to reach its religious sanctuary.  Sitting strangely alongside its Jewish neighbours, this city paradoxically shows how two different factions of the community can coexist. 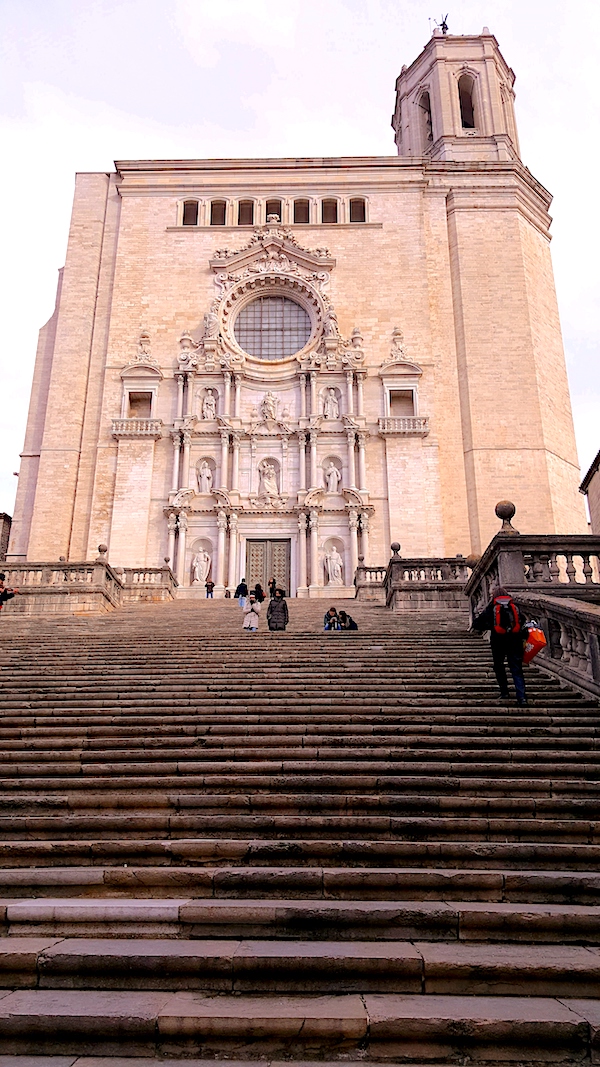 One final pièce de resistance, if my French isn’t completely out of place in a Spanish write up, is La Plaça de Independence, just on the other side of the river. A huge square with café-lined archways that set the scene for a small yet power symbol of the fight for independence back in the early 17th century. Whilst today dogs walk, cycles create wheel-track patterns in the sand and Instagramers look for the ultimate pose, there is a strange message carried through the ages about fighting for your right for liberation. A fight that still is very much alive, if not yet a battle won.

And so this university city with its throng of youngsters, musical festivals and weekly markets does have plenty to offer for a day’s visit. Modern one side and ancient the other, an eclectic mix that offers the visitor an day of intrigue, good quality walking and an insight to city holding onto its historical identity.

So how would we sum up Girona? Whilst it may not sparkle like its Spanish siblings, Girona has character and with its compact streets and bird’s-eye fortress promenade, it offers up a unique perspective of a yester-year that gently asks to be remembered. We are glad we came and we would definitely would recommend a visit here, although it did leave us sadly wanting. Whether it was the austere feel, the dark streets or the quietness, there was something missing for us. That said, come make up your own mind – it must be experienced even if only for its city walls.

Our Recommendations for a visit to Girona 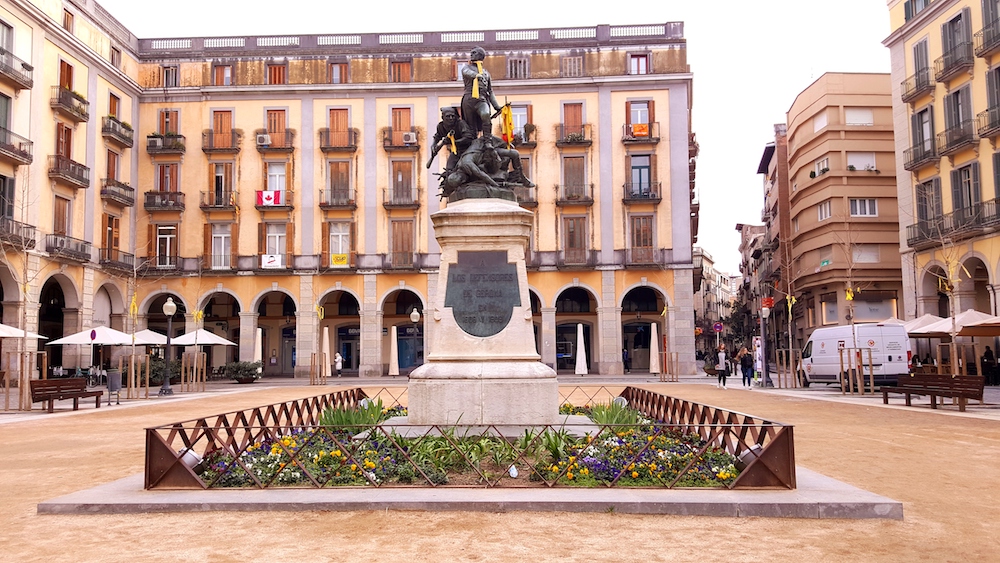 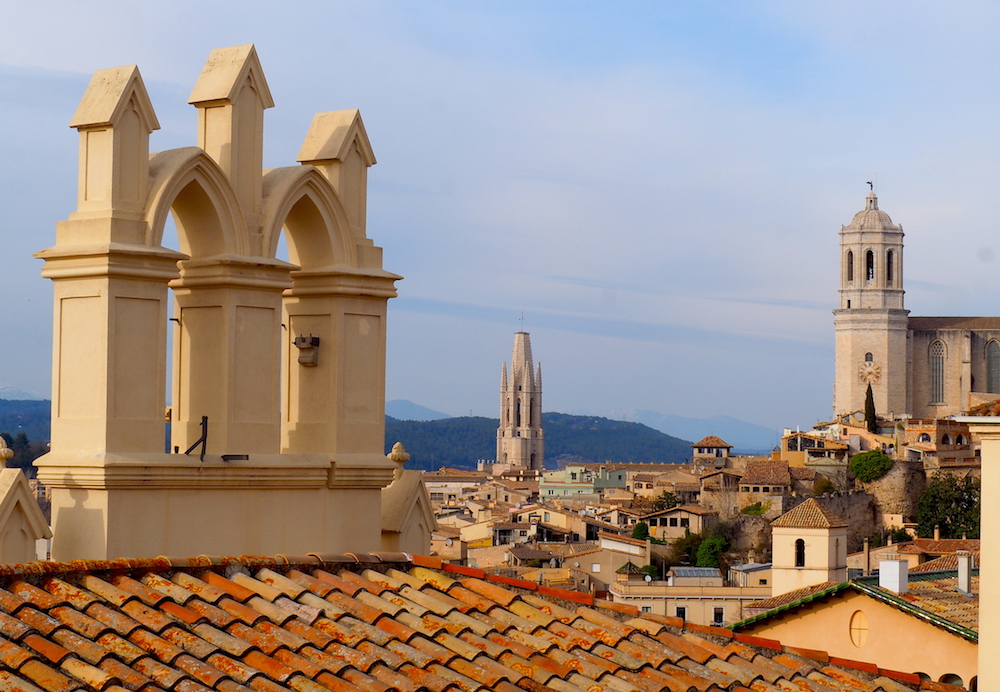