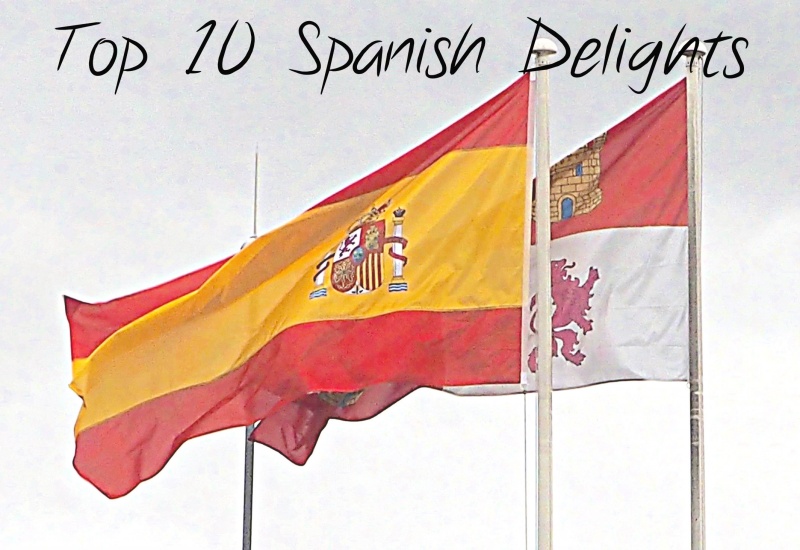 As we sit just across the French/Spain border, it seems appropriate to reflect on our Spanish odyssey over the last seven weeks and compile our favourite Top 10 Spanish Delights. It has been a real immersion into the soul of another country and we have come out the other side with a greater understanding and love for this Iberian land and its hidden treasure. Whilst there is so much more to explore, these were our highlights.

Stunning Segovia – Castilla y León
We were often overwhelmed by Spain’s irrefutable religious devotion, evidenced by the passion that went into the construction of their religious monuments. The most memorable collection for us is Segovia accompanied by its charming old town, which requires a whole new vocabulary of colourful adjectives. From the Roman aqueduct which powerfully imprints its historical legacy, to the market of the Plaza Mayór overseen by the shadow of its magnificent Cathedral and of course the Castle, which looks like it’s jumped straight out of a Disney film. Perched high, Segovia commands your admiration as you wonder through its characterful alleyways, its network of cobbled streets and plethora of religious masterpieces that caste a magical spell over you forever.

Seductive Seville – Andalucía
Seville was an attack on our senses, and powerless to her charm, we surrendered with every fibre of our body. Aside of the tourist haunts that seem an inevitable drawn, Seville has so much more that the hop-on, hop-off buses and over-priced horse-drawn carriages. When you look deep into Seville’s soul, it tells a story that engages you with each turning page. It’s a real sensory explosion that left me feeling touched by something far more than bricks and mortar. The Orange Blossom trees that line the avenues, the magnetising allure of Alcazar’s Palace, the doves that don the silver birch trees in Plaza España, the ornate historical and modern buildings and the elegant feel of each city corner that held its own secret. Seville is a stunning place to let yourself go and experience something so much more than a touristic excursion.

Delightful Doñana and El Rocío – Andalucía
After the buzz of Seville what better place to soothe our racing heart than Mother Nature’s rhythm. Doñana National Park is one of Europe’s most important and diverse parks, offering three unique ecosystems; forest, wetlands and sand dunes. This wild south-western corner of Spain is, we suspect, much missed out by many visitors, unless you are going in or out of Portugal. If bird-life is your thing, then Doñana is a must on your Spanish odyssey. Add to this, the intriguing El Rocío that with its eclectic, non-conformist community, leaves you treading through its sandy, unsealed roads, feeling like its been a Holywood movie set. El Rocío is just one of those places that has to be seen to be appreciated. Words and pictures just don’t do it justice.

Gorgeous Grazalema – Andalucía
The mountains in Spain hold so many treasures that when you can tear yourself away from the motorway south or the beach lounger along the Costas, they will simply make your heart skip a beat. We loved the mountains and we danced amongst them as often as we could, as this is where we felt most at home. Sierra de Grazalema Natural Park, east of Jerez is just a joy. After the buzz of towns like Cadiz and Seville, this haven of majestic giants is like the soothing feel of a velvet blanket around your shoulders on a cold night. This region is home to the famous ring of Pueblo Blancos – White towns, which as the name suggests are full of white-washed houses that each have their own character and history. As you climb the mountains exhausted by the hair-pin bends, you gently sink into Grazalema’s welcome. This spectacular village clings purposefully to the side of the mountain claiming its right to perch there for all eternity. I was moved to tears when driving into this village, as around every bend more of its beauty is revealed and you get drawn into its cobbled streets, España Plaza and its dazzling whiteness. I defy you not to fall in love with this hidden treasure chest of loveliness.

Magnificent Monfragüe – Extremadura
Purely by chance, we were looking for a change from the religious cultural explosion that we had experienced in Burgos, Segovia and Salamanca – and Monfragüe popped up offering us sanctuary. With Red Kites, Storks and Vultures flying overhead, we soon began to appreciate the preciousness of this natural park.  It is home to a number of rare breeds, namely the Black Vulture and Black Stork, which are, worldwide, endangered species. Amongst it voluptuous mountains and deep river valleys, you are entertained by clouds of these amazing raptors, as they sedately catch a thermal or two. The walks through the area are just stunning and you can easily while away a week here, if you’re a nature lover.  Peace, tranquility and raw nature welcome you in this Spanish heart-land.

Resplendent Ronda – Andalucía
Ronda’s iconic bridge over the plunging gorge features heavily in Spanish holiday marketing – and it is not be to be missed. Its stunning city walls, old town offerings and of course the gorge, will treat you to a veritable feast of photo opportunities, walking or simply coffee drinking and people watching to the echoes of the church bells. We watched a Flamenco dance here too, which was mesmerising and so emotional that you will leave feeling blessed to have witnessed something so heart-driven and passionate.

Glorious Güejar Sierra – Andalucía
Deep in the Sierra Nevada mountains, north of Malaga and away from the Costa crowds you stumble upon Granada. Now whilst this is indeed a beautiful place to visit and the Alhambra Palace the major draw for most people, what was more memorable for us was the spot about 8km outside of the city, up in the mountains. Güejar Sierra is a small and charming village that has adjusted to mountain life admirably and with a bus that takes the Snakes and Ladders route to the city twice an hour, civilisation really isn’t far. There are plentiful walks, and the ice-blue Embalse de Canales to feast your eyes on too. If you are lucky as we were, to have a spring storm, then you will be rewarded with snow-capped mountain peaks making for a picture-postcard album of photographs. The peace we found here was soul-soothing and yet another one of those places that you just could have stayed at forever.

Dazzling Denia – Valencian Community
East from Granada on the coast you have another Costa that lures in the English tourist. Yet beyond the traditional Costa Blanca holiday destination is the more tranquil host of towns that includes Jávea, Denia and Olva. We didn’t quite make it to Javea as the pine-clad campsite of Los Pinos in Denia seduced us into enjoy its delights; its elegant promenade, cliff and mountain walking, its classy marina all entice you to simply hang out. We loved our goat impersonations as we hiked along precarious cliff edges and our training for the Tour De France took shape, as we cycled along the towns many dedicated cycle routes, often distracted by the stunning scenery passing by our eyes. Whilst not the nightlife you might expect from further down the coast, this was a super place to park up for three or four days and just be.

Visionary Valencia – Valencian Community
One thing you can’t do in Valencia is be. Valencia invites to you walk amongst its city streets and marvel at its understated pleasures. After the historical dunking from our previous cities, Valencia offered us

a refreshing modern twist on architecture. The parks running around the outside of the city are a haven for fitness enthusiasts and the Catalonian culture speaks volumes here, as ladies in their La Falla customs glide through the streets after church and the local flag proudly flutters from windows stating their allegiance. Valencia needs to be savoured and our one day trip was simply not enough.  It needs – no, it deserves more time to wander.

Colourful Costa Brava coast – Catalonia
Our final highlight is the Costa Brava. Its fusion of rugged coastline with bays, coves, mountains, peninsulars and beautiful beaches show little evidence of flocking Costa tourists. This is the quiet, more elegant Costa, just east of Girona and only a handful of kilometres from the French border and the Pyrenees. We called home, a place just east of L’Escala on the Montgó peninsular with a sandy beach one side and a craggy cove the other.  Its mountain backdrop frames the bay and its coves beautifully, as they try to shelter from the tempestuous Tramontane wind.

The highlight of this part of our trip was heading over the mountain to Salvador Dali’s territory, Cadaqués, which had a very special, creative energy about it.  Built into the rocks, this town sparkles with artistic talent from its painted electricity cupboards to its artisan shops selling their wares and the iconic bay upon which the town gazes for its inspiration.

With a very contented sigh, I reflect back upon the journey we’ve taken, that not only was virginal for us in Spain, it was also our first experience of living in a motorhome full time, with no house to speak of and no jobs. Just us, the road, our chariot and the Spanish countryside waiting to inspire and teach us and what a classroom it’s been. With gratitude we appreciate all that we’ve experienced and look ahead to our French adventure with eager anticipation.  It calls us to return and savour its delights some more.  And in the words of Arnold Schwarzenegger, ‘We’ll be back!’