Wrocław, may well be Poland’s fourth largest city and capital of the south west region of Silesia, although this seems not to be on people’s travel itinerary. Perhaps the lure of Krakow to the east has more appeal. After all the cities we have seen in the last two years of our full time travels, Wroclaw has shot up to poll position, sitting proudly in our Top 5 favourites.

Wroclaw is one of those places that defies adjectives, because something far more profound than simple words are needed. The best way I can describe it… is like a novel that you pick up from the library that looks pretty enough from the outside and yet once you begin reading its compelling story, you realise how little the cover does it justice.

This is how I feel about Wrocław. When I visit a place I am often in a quandary about how much research to do before we go. Do too much and it spoils the surprise; do too little and it’s easy to miss the real essence. So for our visit to Wroclaw, I had done a little reading up from a Lonely Planet’s Guide and plotted the main ‘tourist highlights’ from a Wroclaw website. Yet I have never felt quite so unprepared for the real truth behind the elegant facade of this city. In many ways I feel a little ashamed at the lack of knowledge that I had gleaned beforehand. Having remedied that on our return, I now feel like I know a bit more of the real Wrocław and, in truth would love to return to speak to its soul and not the glossy, yet delightful image that it portrays on the outside.

Wrocław – Did you know?

Did you know that this city used to be called Breslau and only became Wrocław after the German’s were defeated in WW2?

Did you know that the city was devastated and had to be rebuilt after a Mongol attack in 13th Century?

Did you know that the city was to fall to yet another attack which would devastate both the Medieval buildings and its population?  In fact 70% of the city was demolished by the Germans in 1944 so that they could build a fortress to encompass the city, trapping residents inside its walls as part of their defence agains the advancing Soviet Army.

Did you know that The Siege of Breslau in 1945 was one of the worst human tragedies of the War loosing a recorded 170,000 people during an 80 day siege?

Did you know that in the aftermath of the battle, more devastation was to rain on Wrocław as poverty, raping, pillaging and disease took their toll on the remaining civilians?

Did you know that the Anti-Soviet movement – the Orange Alternative was founded in Wrocław in the early 1980s and they used creativity and humour to stand up against the Communist rule and they played a significant role in Poland’s fight for independence. Their symbol was the dwarf – more on that later.

And did you know that it was awarded European Capital of Culture in 2016 and was voted Best European Destination of 2018. Now that is some come back! 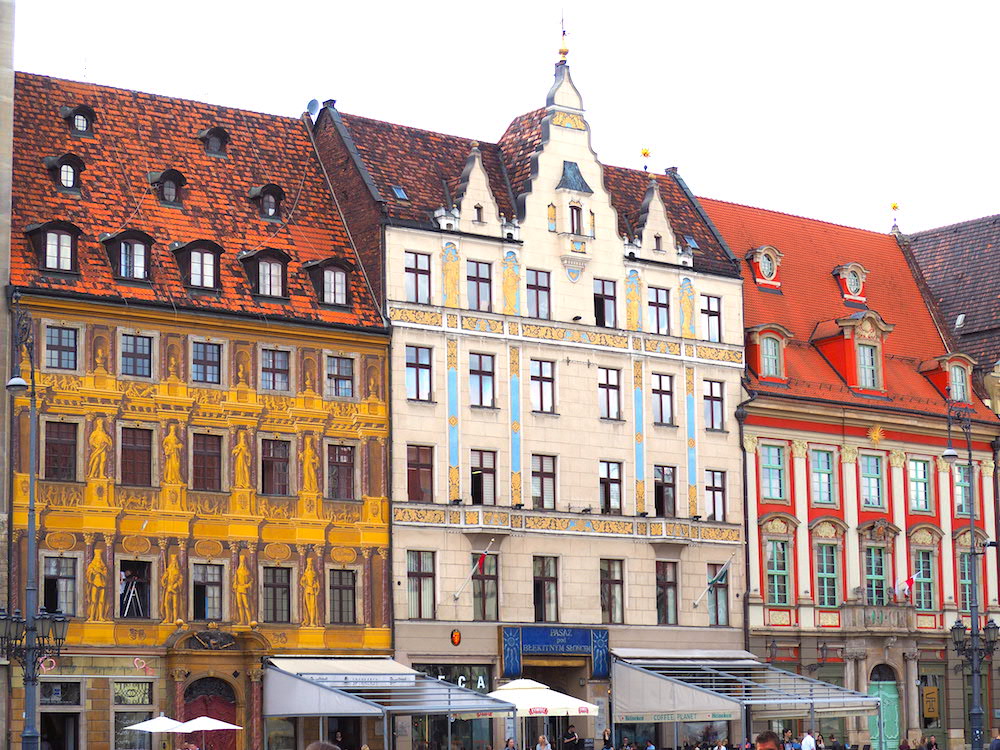 Of all the great cities we have visited, Wrocław is the one that stands head and shoulders above others for its sheer tenacity and strength against opposition. Whilst they may have been brutalised, overwhelmed and beaten, it feels like today’s Wrocław is saying ‘We are not defeated’.

The example of the Phoenix rising from the Ashes, has never been more apt.

Every building, that looks so immaculate in the Market Square has a tale to tell and, whilst its frontage may delight your eyes, it is what lies behind the facade that is more important. Perfectly reformed, a scar or three may be, although tough, strong and irrepressible. Wrocław will have your admiration and undying affection when you blend its historical battles with today’s modern and award winning city.

With this historical context in place, I feel it is now appropriate to show off the visual display that this city offers the eager visitor. Click on the image below to see a short video of our highlights.

Wrocław strangely doesn’t have a feel of a city, as even on the outskirts there is very little evidence of the built up, residential and industrial zones that are so often found in large cities around the world. The one thing that struck us most was how well catered for cyclists are around the city. Everywhere you look there are dedicated bridges, cycle routes and even traffic lights – reminiscent of our trip to The Netherlands last month. And then there are the trams, buzzing all around the city offering car-less travel if you wish. And I’m sure this contributed to the feel of the place. No traffic jams, no honking horns and no congestion. It was a joy to cycle around without the threat of being clipped by a passing lorry.  That isn’t to say that it was deserted. There was still plenty of atmosphere, just not the sludge that you often feel in an inner city. 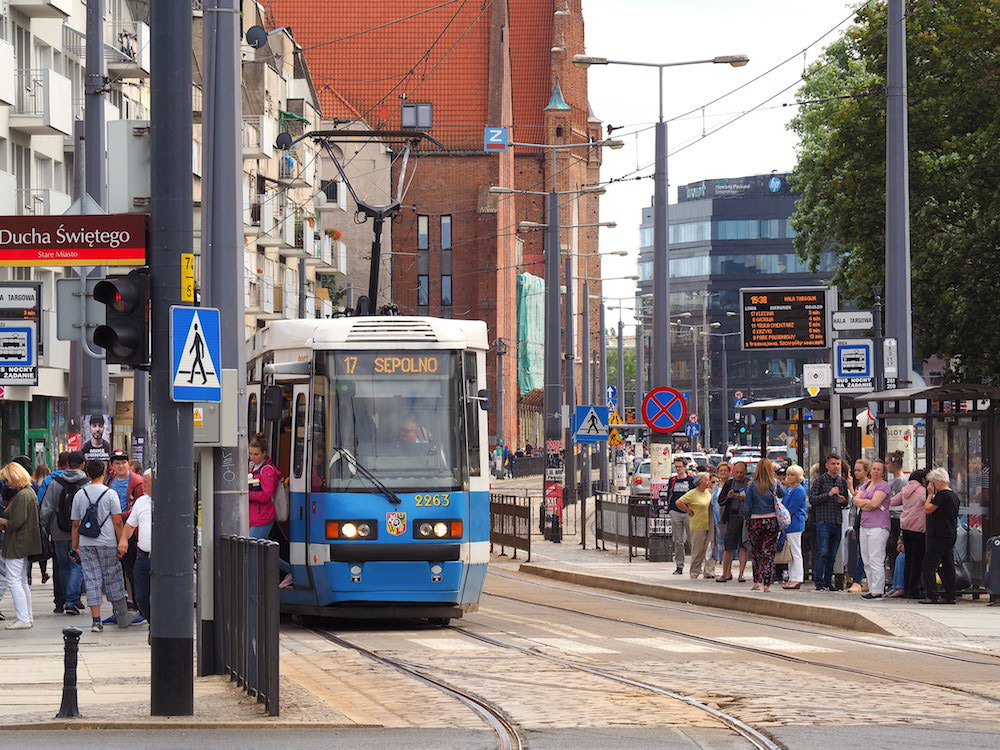 Situated on the banks of the River Oder, Wrocław is often described as Poland’s Venice. Having been to Venice I’m not really a fan of this comparison as it’s a huge set of shoes to fill and I feel that Wrocław deserves an identity of all its own. That said, there sure is a lot of water here and its 130 bridges and 12 islands form the basis of Worcław’s charismatic allure. 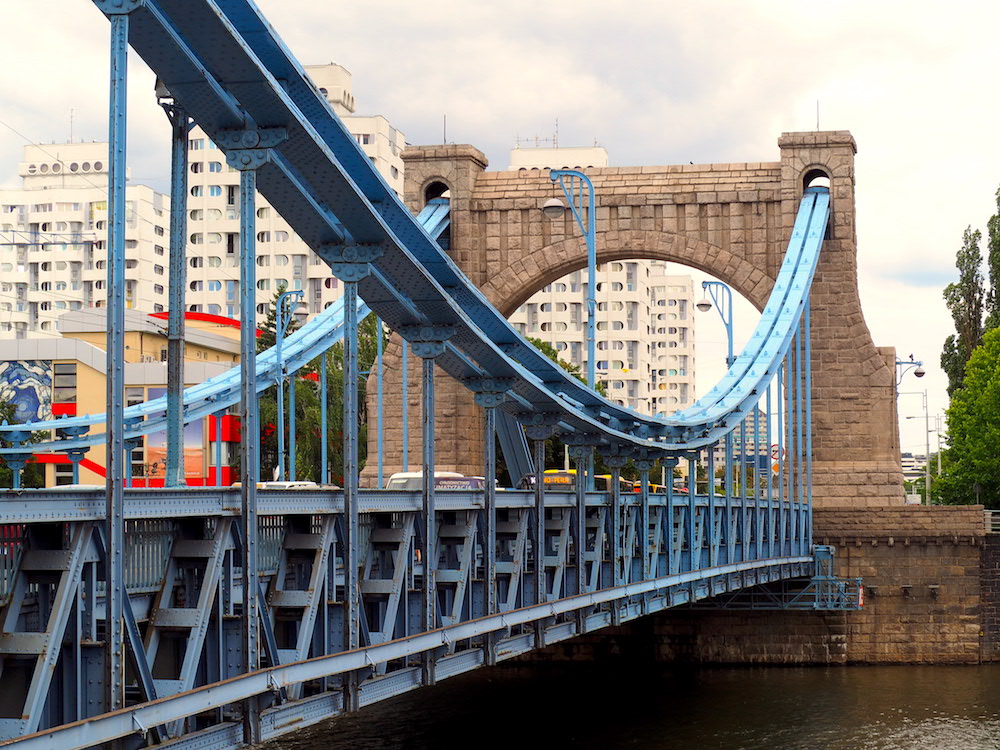 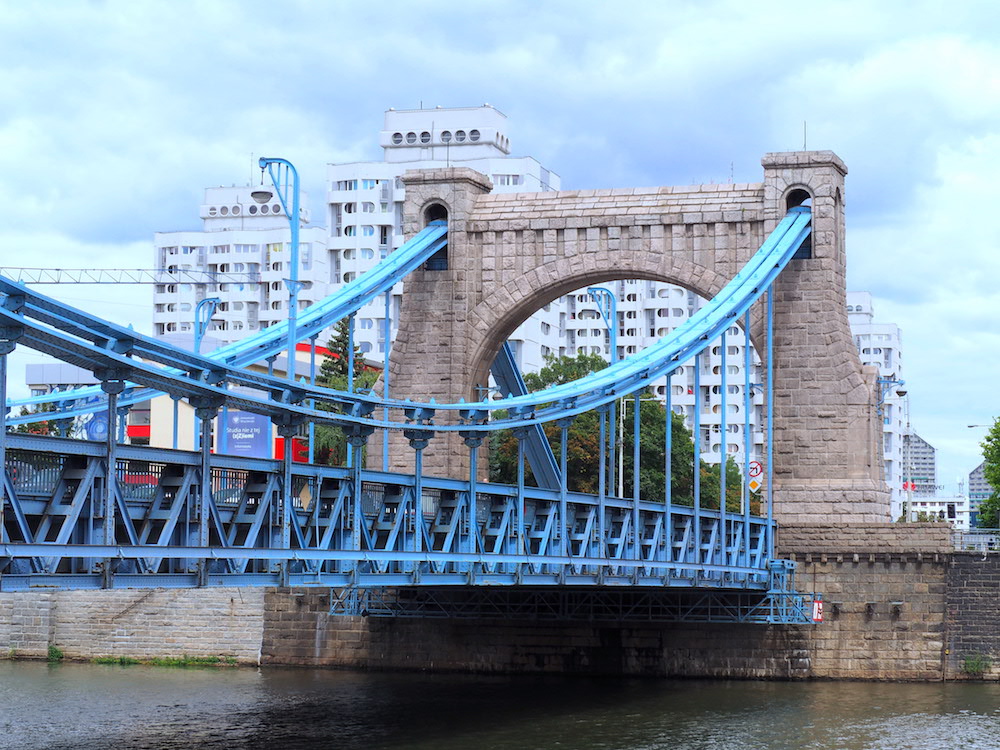 Wrocław is colourful. It embodies its creative history and it really does demand that you to look up from your phone and see the roof lines that stand out against the afternoon’s brilliant blue skies. Or perhaps you just want to listen to the music that seems to float around the streets in some sort of melodic happiness.

As I mentioned earlier, gnomes played an integral part in Wroclaw’s history. When the Soviet rebellion group, The Orange Alternative was born, they adopted a creative strategy to their resistance. They would deface the propaganda posters around the city with street art, most noticeably mischievous gnomes, as a way of laughing at the establishment. Every since then, the gnome has been an important symbol to Wrocław and in 2001 the city decided to commemorate the rebellion’s artistry by placing a bronze statue called Papa Dwarf at the Group’s meeting place. Five years later a local artist had the idea to create smaller statues, which have since been placed all around the city – between 300 – 400 of them to be precise, each one telling a modern-day tale of city life.  They are so easy to miss and yet once you catch one, you find yourself on a mission to find others. 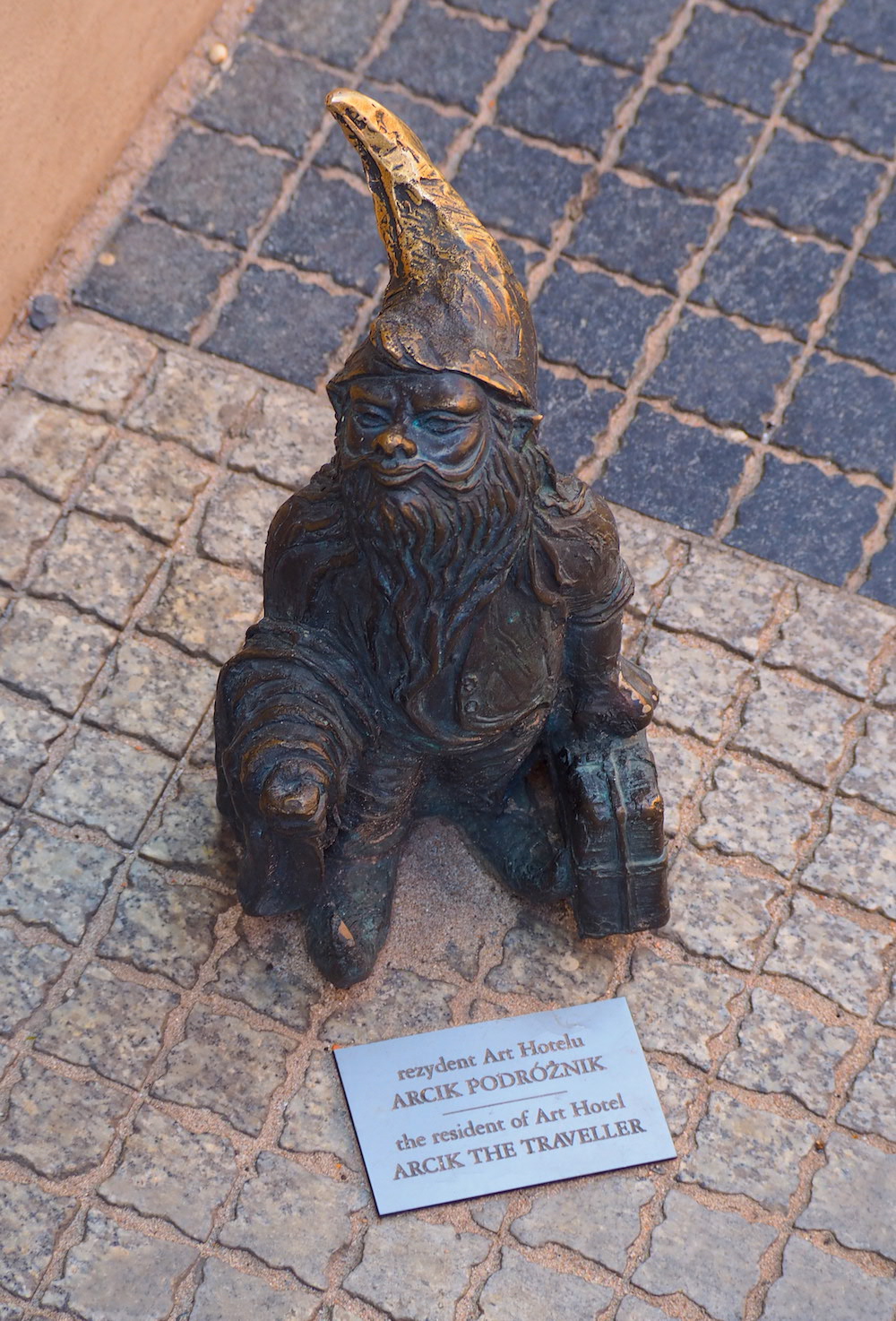 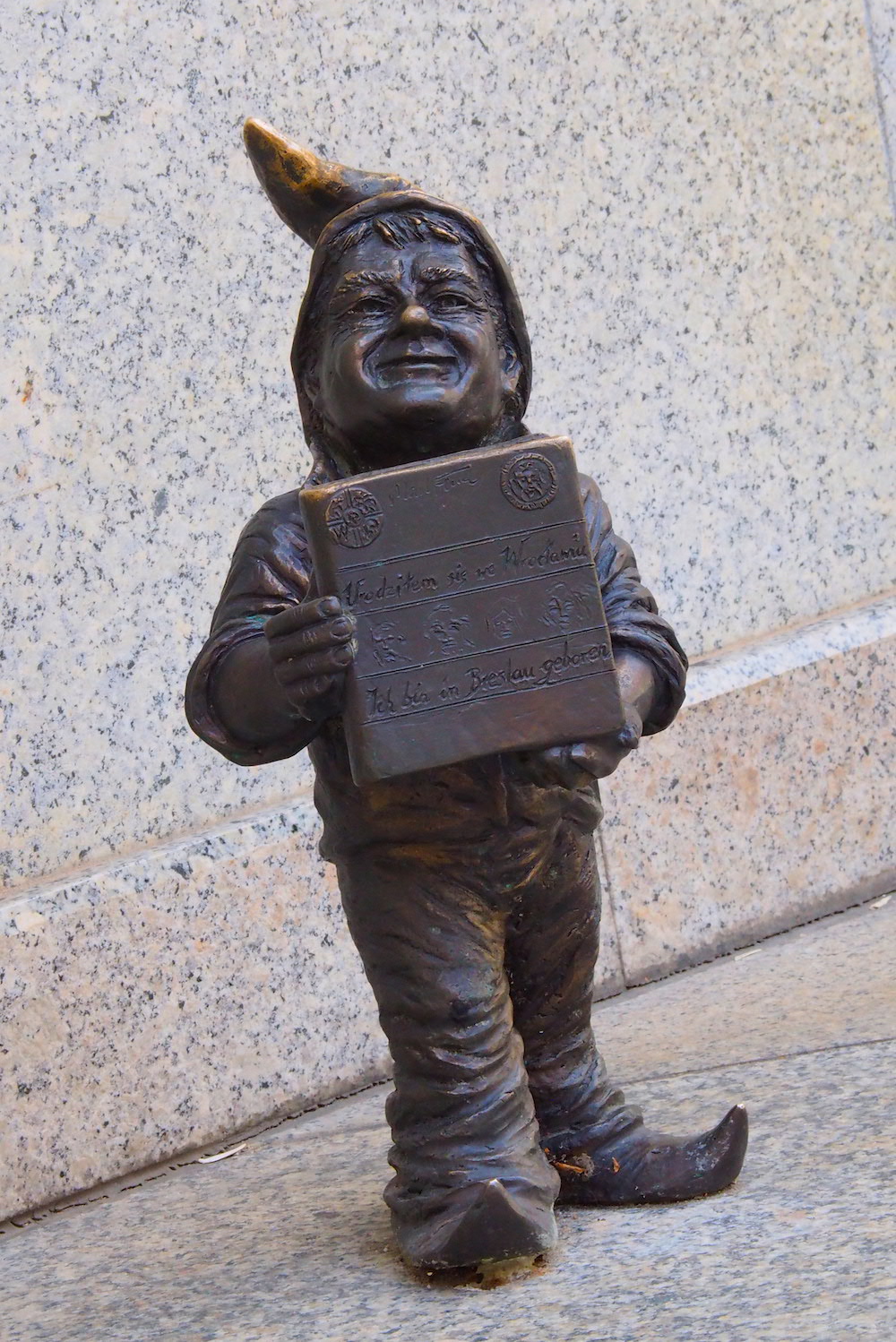 Aside of the cheeky chappies that are found at ground level, slightly higher up on your eye-line you will find some other pretty stunning monuments to people, events and ideals. In fact almost around every corner, there will be some statue or another that will intrigue you. There are chairs, footballs, fountains to name just a few that really give Wrocław its character and charm. 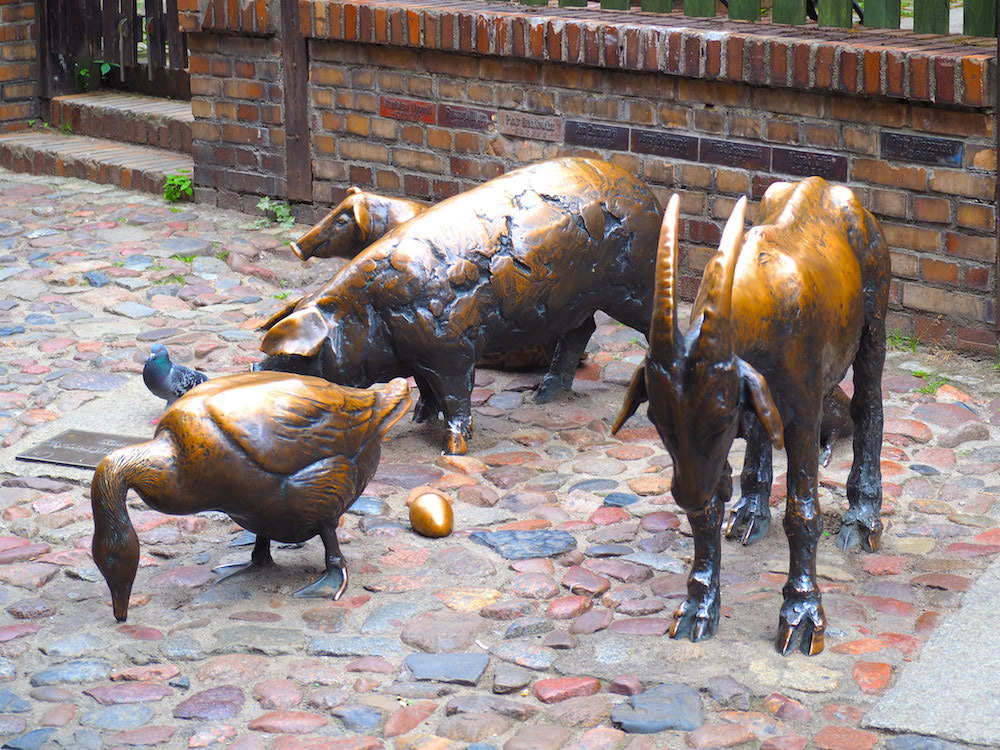 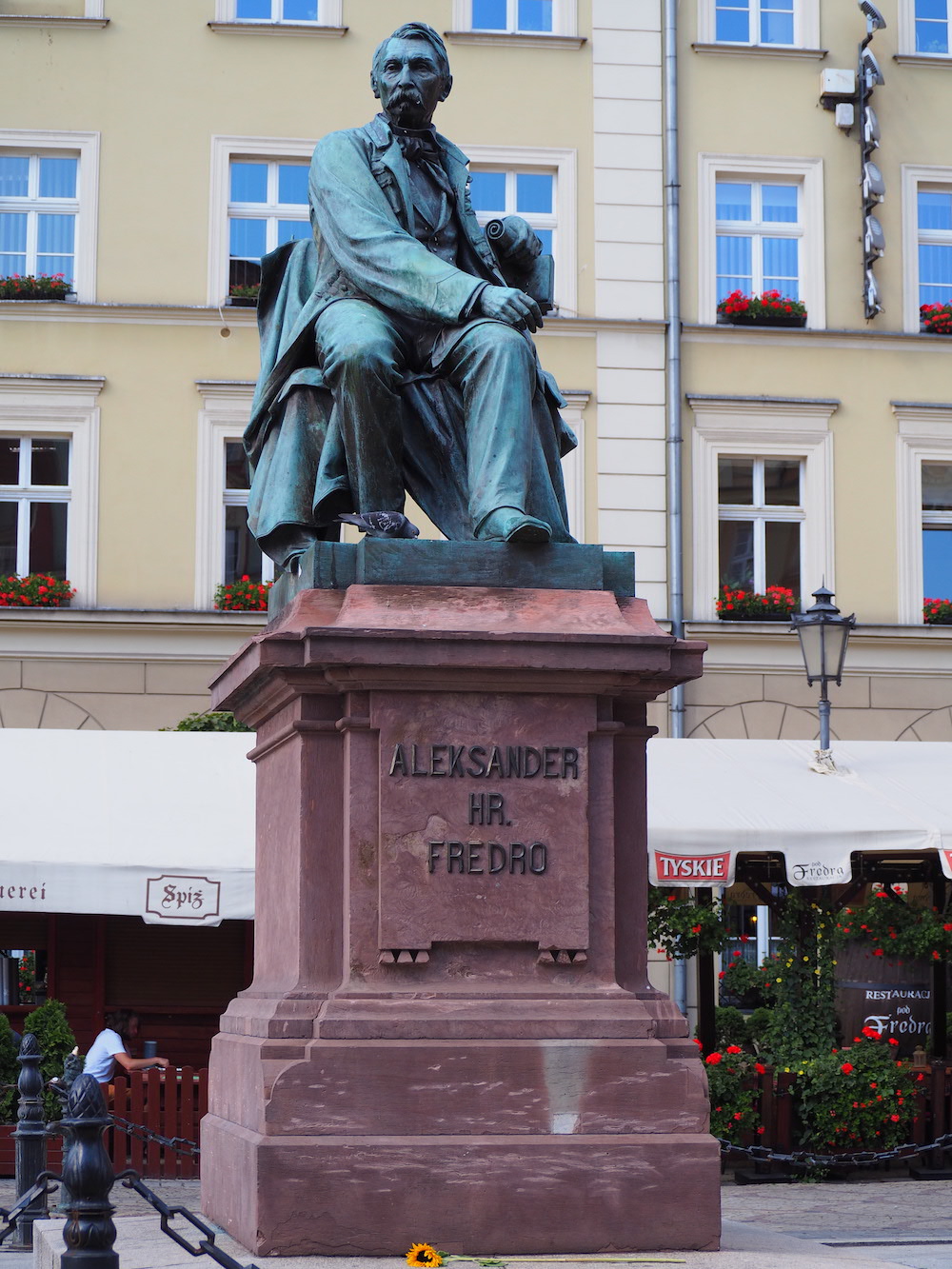 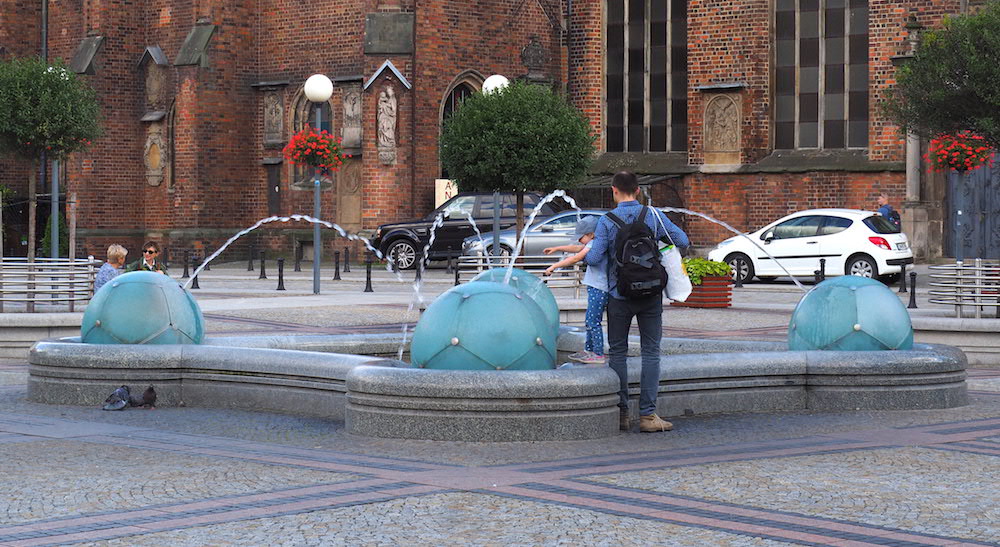 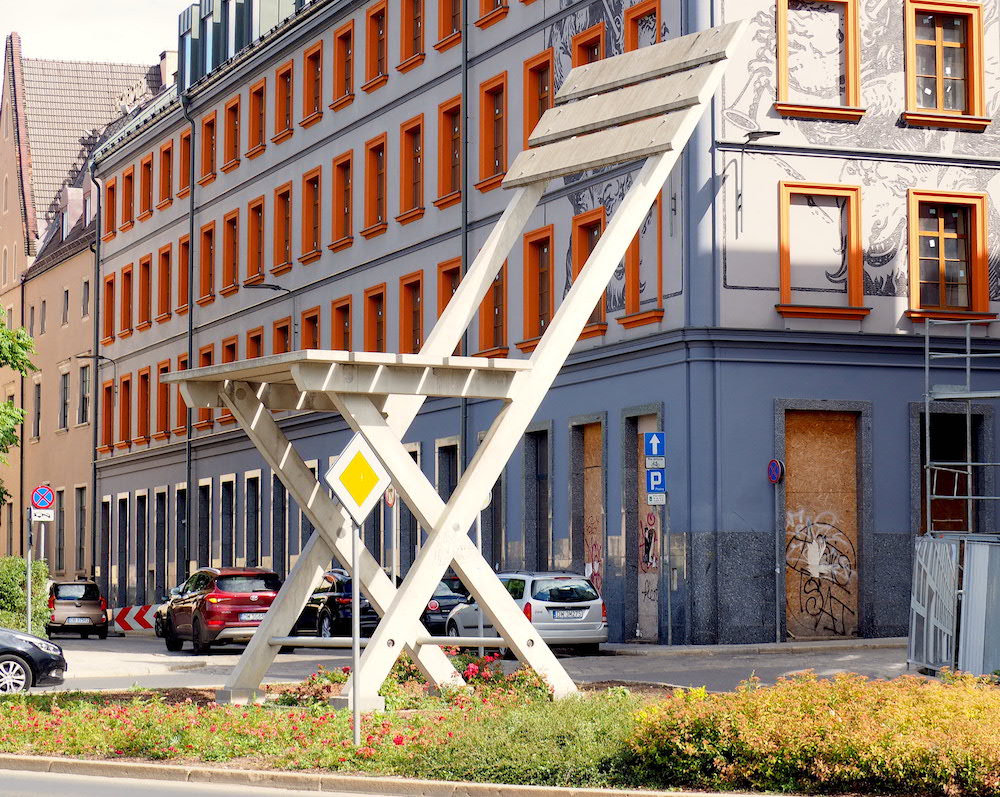 Having said that the comparison with Venice was a mute one, I am about to contradict myself when I come to describe Worcław’s Market Square. Whichever direction you approach it, whether from The Shambles or The Penitent Bridge, the Market Square will impress. From streets bordered with the tallest of buildings that sometimes feel claustrophobic suddenly you open up into this atmospheric square with cafe-lined edges, where a piano tinkles filling the air and an acoustic rhythm that bounces off the walls. And that’s all before you caste your eyes around the skyline of buildings. Gothic, Medieval, Baroque, they all have a presence here and you could imagine the history that holds them up. And I think armed with the know of the bygone era it makes these facades even more impressive. You will not want to leave this enigmatic space and you could easily while away a couple of hours drinking their cheap beer and people watching.

The centrepiece is the St Elizabeth Church and the Town Hall which elegantly and assertively stand with pride relishing the placement of every piece of rebuilt brickwork. These are just testimony to Wroclaw’s culture. 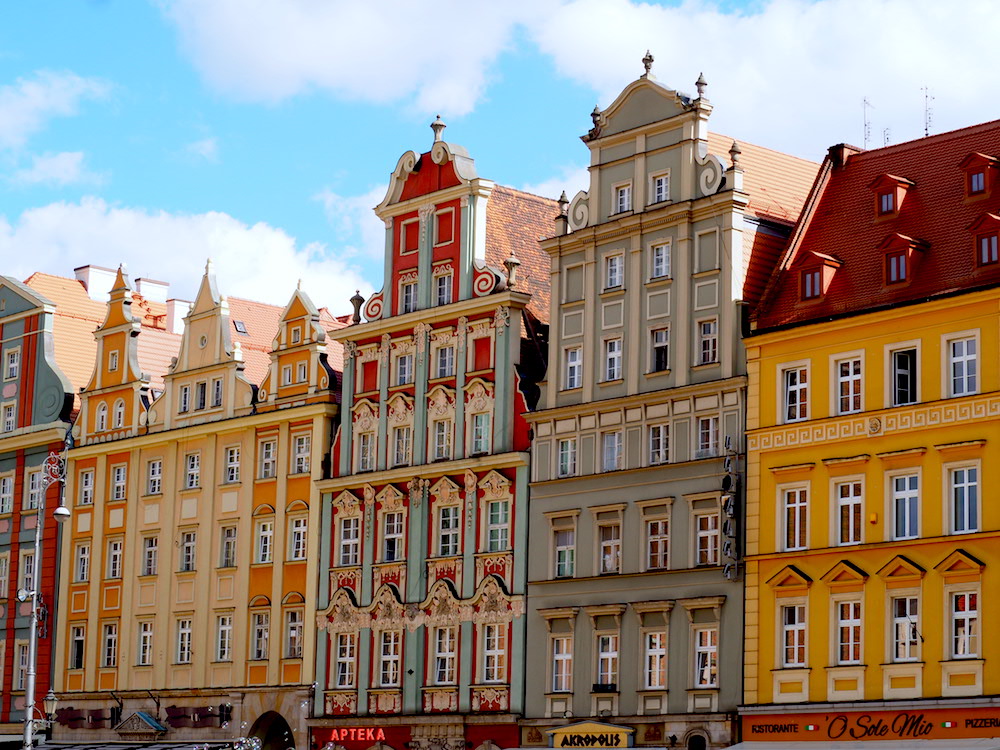 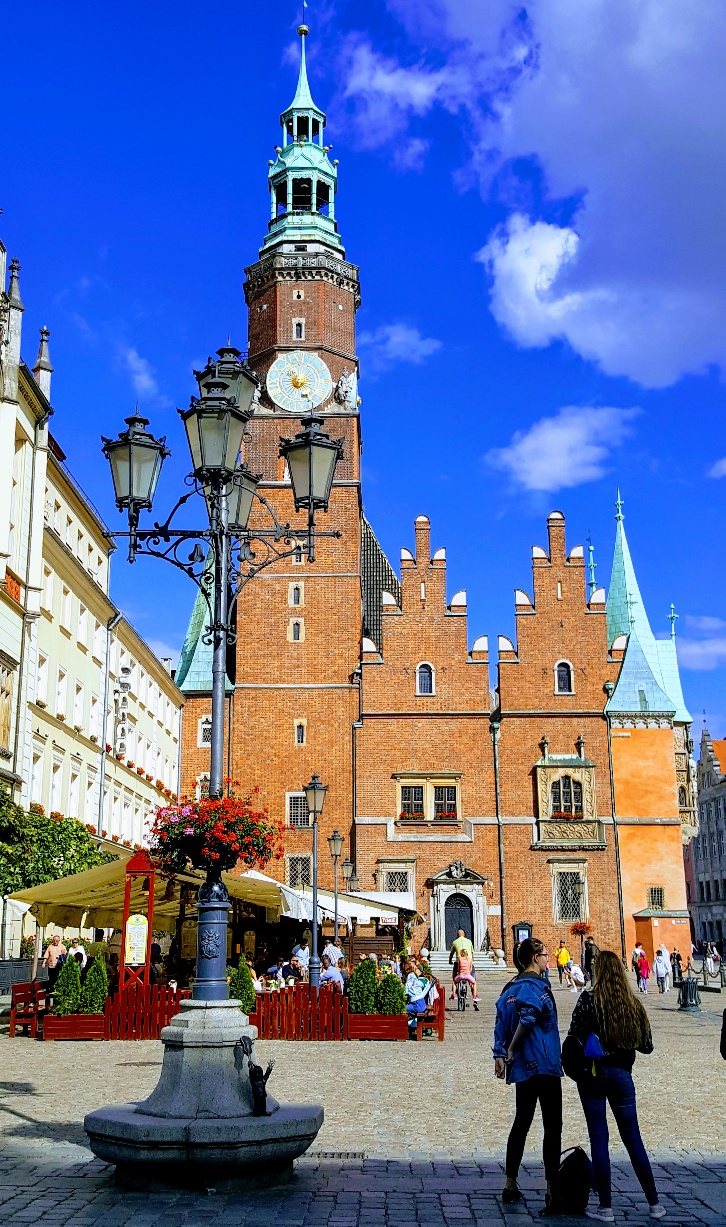 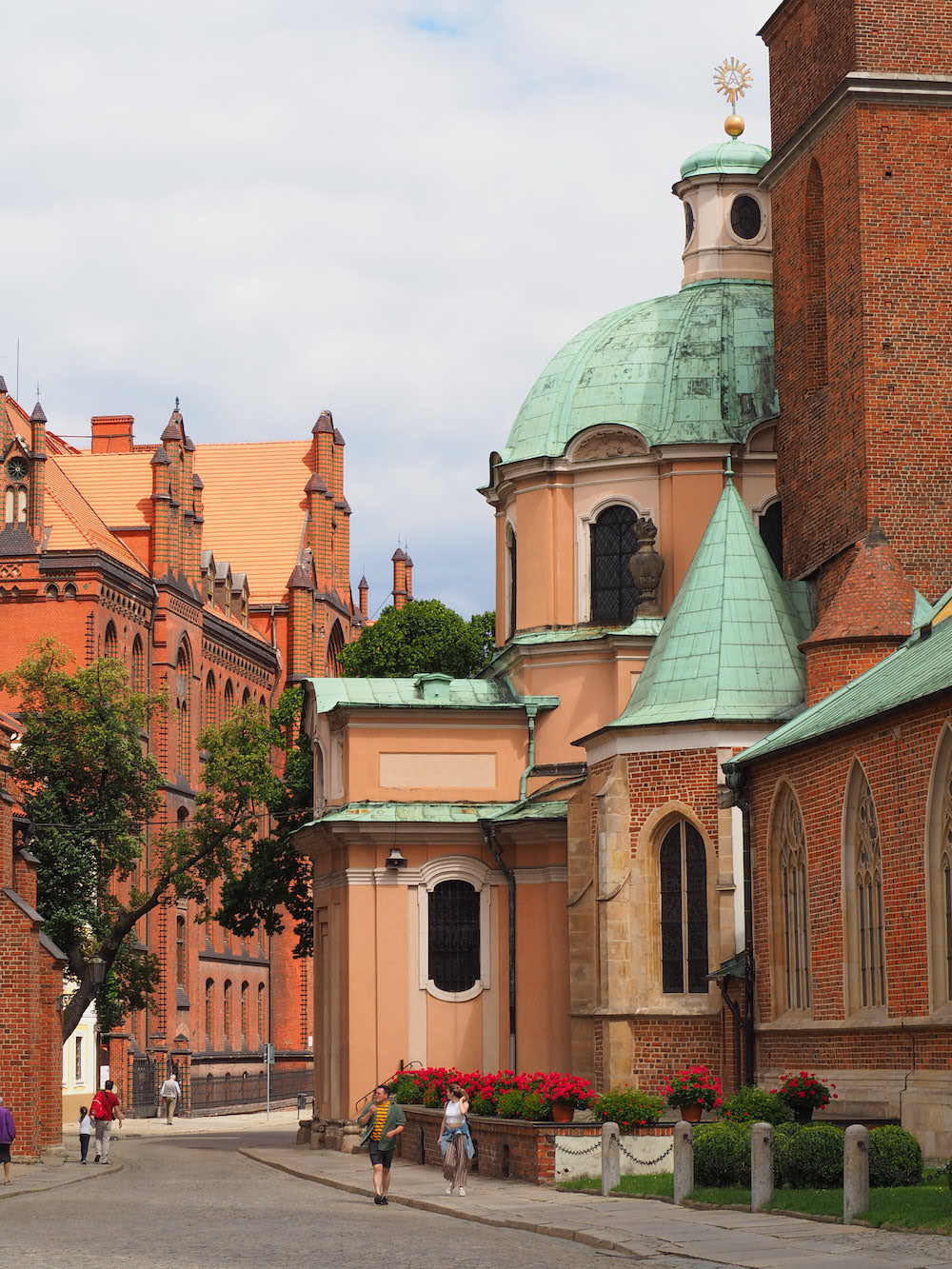 Don’t miss the 14th century Cathedral – St John Baptist, which like so many other dwellings was destroyed in the Siege of 1945, yet has been beautifully rebuilt back to its former glory. There is some evidence that one of the towers is 10th Century, hence why they look so different, so the attention to detail in the reconstruction is outstanding. Can you just imagine what the view looks like from the top of this 97m viewpoint?

As you amble down the tree-lined avenue you get sucked into the effervescent buildings, despite the tourist trains disrupting your peace. The Tumski Bridge has got to be one of those Instagram moments, as lovers capture their sentiments in a padlock and a statue of Pope John XXIII stands with grace and presence overlooking the river that surrounds this stunning piece of heaven, leaving you mesmerised. 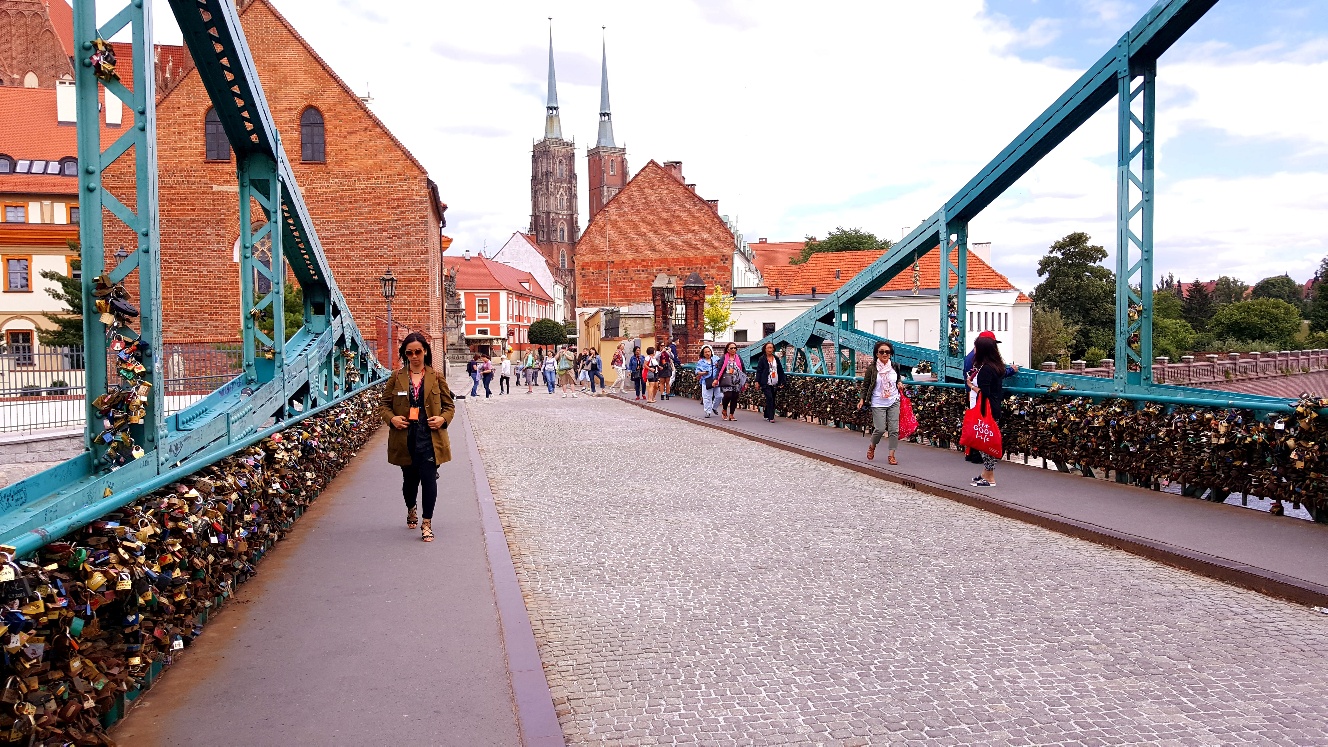 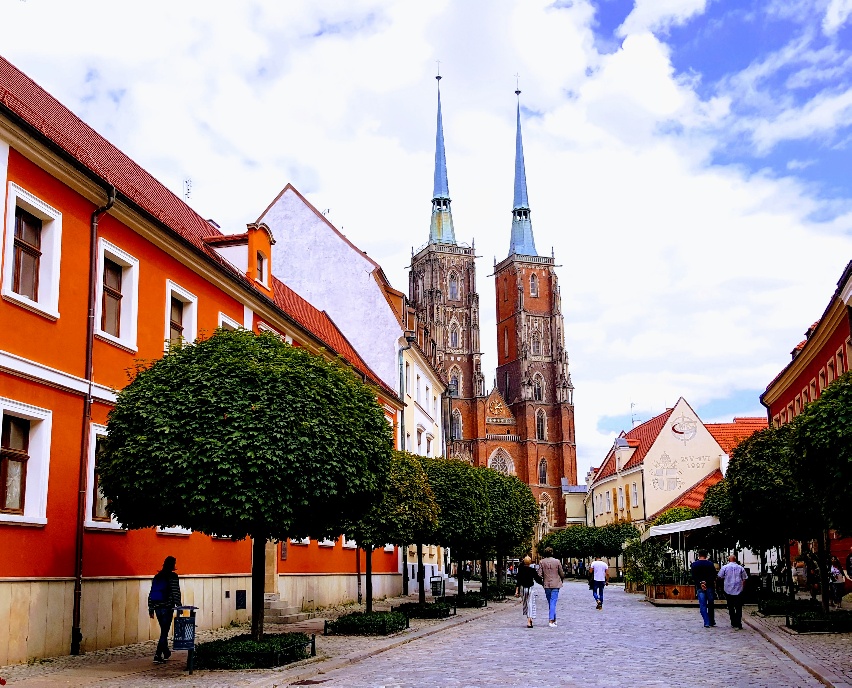 And to complete our Wrocław city tour who could not put a park and a fountain on the agenda? Although this is no ordinary park, nor any normal fountain.

This is a park that includes acres of landscaped zones including a Japanese Garden. If like us, half a day on your feet exploring has been enough, then do make time for an evening display at the multimedia fountains. Chill out on the grass as you watch the synchronised water play in time with classical, jazz or modern music and what how the lights and visual effects dance around the arena. The shows are free and go on throughout the day, on the hour from 1000 and the evening shows start at 1800 through to 2140 and it is lovely to be part of this event and I guess at night with the full effect of the lights and the setting sun make it even more atmospheric. 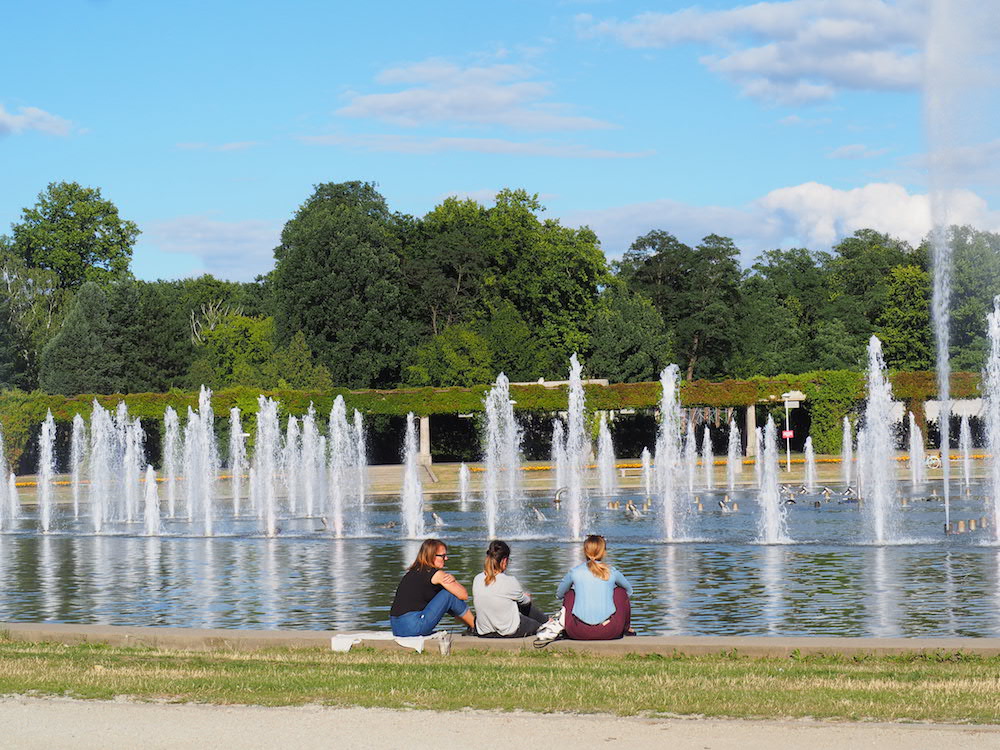 And so, what say we about this city of Poland? An example of a place besieged and ravaged by war and oppression, yet has risen up against its opponent to reclaim its rightful place in Europe’s ‘Best Destinations’. You will not be disappointed by Wrocław in any way.

Want to save for later? Why not Pin it? 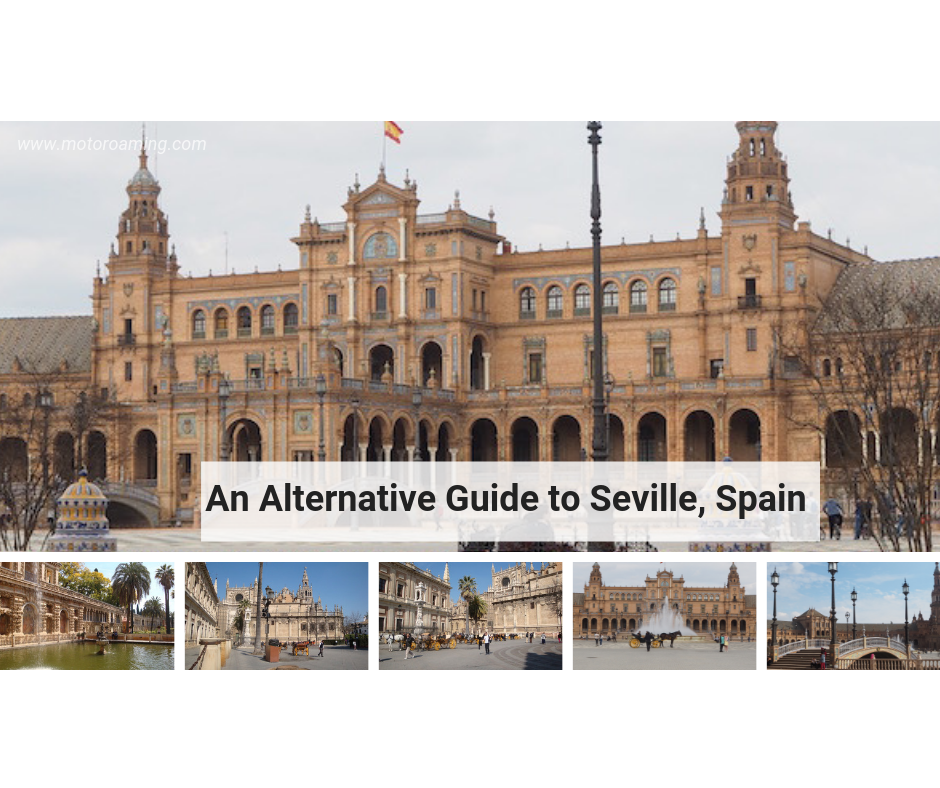